Younger family members queuing up to pay their respects to parents and their elders back in the ‘old’ days (which wasn’t so so long ago). Should all the grandkids traipse over to see their elders – and risk their beloved grandparents’ health? — Filepic/The Star

The problem began when our government decided to relax the conditional movement control order (MCO) further to allow Hari Raya gatherings (as long as no state borders are crossed). Grandparents can now demand that, on the first day of Aidilfitri, they expect to see their kids, grandkids and various progeny lined up before them – and the young ones have to decide how to act.

The obvious dilemma is: On a day we’re meant to show respect and piety to the older generation, how do we contradict them? How “safe” is safe?

The National Security Council has deemed gatherings of 20 people in a single household as safe. However, the Health Ministry has clarified that diligent hygiene and physical distancing must be enforced.

But even our Parliament has been curtailed, with Covid-19 given as a reason. So if we want to hold open houses, it’s going to look very different from what we know. We can’t shake hands, hug or kiss. Kids have to be told they can’t play with each other. Food needs to be served in a safe way – whatever that means. Even duit (money) Raya needs to be considered: paper packets or bank transfers?

What do we really know about the dangers of contamination? How easy is it to be infected? How do we calculate risk?

One way is to take a rough, back-of-the-envelope estimate. Let’s start with data from the Health Ministry, that the incidence of sporadic cases in Malaysia is about 0.1%. That’s one in every 1,000 people, based on pre-op patients and community screenings in Selangor.

What about the risk of infection if you’re in close quarters with someone contagious? For that, we can go with an upper-bound based on what we’ve seen elsewhere in the world. Let’s take the South Korean call centre that was evacuated when one staff was diagnosed with Covid-19. After a check, the authorities learned that the patient had shown symptoms two weeks prior; in that time, 94 out of 216 workers (or 45%) on the same floor were infected. There were infections on other floors, but the bulk happened in one half of that very floor, and employees were exposed to the virus for days.

Is there a narrower window of opportunity for infection? For that, we look at another example, this one from Guangzhou, China. A family that travelled from Wuhan ate at a restaurant where their table was flanked by two others about 1m apart. Their lunchtime overlapped with two other families, one for about 53 minutes and the other around 73 minutes. Within two weeks, 10 diners who had sat at those three tables became ill. The three families were in a direct line with the airflow from an airconditioner, while none of the other 81 people in the restaurant contracted the virus.

And then there’s the Washington state choir in the United States. Despite warnings about the pandemic, they held their regular practice. Only half the group turned up for rehearsal, they used hand sanitisers, and they refrained from physical contact. The practice lasted two-and-a-half hours. Within five days, 49 members had symptoms of Covid-19, with the total eventually rising to 52. Two weeks later, two people died. Despite taking precautions, it’s been ascertained that one infected person was responsible for a large number of cases. It’s also suspected that the singing caused the virus to spread.

Though these are non-related cases, the concern is that in the wrong situations, it doesn’t take a lot for the disease to spread, even over the course of an hour or two, roughly the time of an open house visit. Given these circumstances, we’re looking at an infection risk of anywhere up to 50%, which ain’t a small number.

But these cases aren’t just cautionary tales of doom and gloom. They represent a chance to better understand the health crisis. The call centre noted that most infections were in one half of the office, despite there being “constant contact” in the lobby and lifts. And we know that airflow and group singing upped the risk level of the other cases.

But in all of them, there was evidence of asymptomatic infections.

Eventually we’ll have a better handle on what’s safe and what’s not. We still don’t know enough right now. And until we have fast, reliable and cheap testing, it’s hard to get a handle on the chances involved.

I suspect a test costs about RM400 and it takes hours (at least) to get results. It’s not the kind of test that makes it easy to restart businesses or keep them running. Add to that the need for regular testing – one suggestion by British experts is a weekly swab – and we have the makings of a “new normal” that’s more of an intermediate and precarious balance.

So the best estimate I can give to those who still want to have open houses is that you’re looking at about a one in 2,000 chance that somebody who visits you might infect you. And if 20 people come over in a day, you’re staring at a 1% possibility overall.

Admittedly, this is an upper-bound reach and the actual number could be lower. But that uncertainty is big enough that I’ll be advocating a contact-free Hari Raya Aidilfitri until things get better. 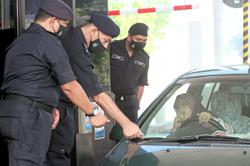 Dear Thelma: My wife wants me to be wealthy and successful like her ex
Here's why we should reduce methane emissions to slow down global warming
New Yorkers start to return to offices, in hybrid mode for now
10 tips to help you sell your car
Cooking the Books: This is the time for feel-good food
Rail-side gardening blossoms during pandemic
Show your colours: Understanding how walls shape a room's atmosphere
Gen Z, their hobbies, and jobs of the future
World's northernmost forests also under threat from climate change
Relationships: What should you do if your adult kid won’t get in touch?