While experts still debate the efficacy of the different types of test kits available to detect Covid-19, Malaysia’s Health Ministry recently reversed itself and added the antibody test kit to its testing regime, to be used ‘under certain conditions’. — AFP

A few weeks ago, Malaysia's Health Ministry put out an infographic that showed the differences between the different ways of testing people for the Covid-19 virus. One is the RT-PCR test (or just PCR) that the government is currently using to test patients; the second is a Rapid Test Kit Antigen (RTK Antigen) test that is being considered; and the third is a Rapid Test Kit Antibody (RTK Antibody) test.

The infographic was wordy but the most prominent phrase was “the Rapid Test Kit Antibody CANNOT be used to detect Covid-19” (translated from Malay).

That’s a clear message. Which is why people might be confused by the comment on April 14, made by Health director-general (DG) Datuk Dr Noor Hisham Abdullah, that Malaysian authorities are now using that same RTK Antibody test to check if people are infected.

The need for mass volumes of testing is one of the strategies that everybody involved in the fight against Covid-19 seems to easily agree on. The reasons why it can’t easily be done are more complicated. One of the debates centres on the usefulness of rapid test kits, including the antibody test.

More than 70 antibody tests are now available in the United States, and a debate is beginning to brew about whether they should be used. On the one hand, there are medical experts who cast doubt on its efficacy. On the other hand, there are politicians who want to promote a speedy solution.

Malaysia has been relatively lucky in escaping many such debates, although occasional signs of a potential conflict between politicians and professional scientists have cropped up: Advice on whether drinking warm water will kill the virus, the correct method and rationale used to sanitise roadsides, and whether barbers can work while practicing social distancing.

By and large, though, people seem to tune in avidly every day at around 5pm for the daily updates from the Health Ministry. Perhaps it’s because the audience sees the DG as a professional who dispassionately doles out facts without a hint of spin or political bias. Every other question at the press conferences is answered with the statement, “At the Ministry of Health, we practice evidence-based medicine”, with an acknowledgement of the World Health Organisation (WHO) which gives guidance as an expert body.

It takes time, perhaps days, perhaps even weeks, for the human body to produce antibodies in response to a virus. It is possible to be infected – and be infectious – yet have a negative antibody test result. It’s obvious why this can be so dangerous: An individual (labelled Case 1,031) who had a negative antibody test was discharged and then went on to infect several of her family members. “This is one of the factors why the ministry does not recommend the use of antibody rapid tests,” said the DG.

If this is the case, then why is the ministry itself now using that very same test for certain patients? The key word here is “certain”.

The DG explained all this (and more) in his press conference (the part on antibody testing stats is at about 28 minutes in the video), but I can’t help but feel that perhaps not everybody in the media room understood it. It wasn’t in the press release, and nobody asked a follow-up question to clarify. It’s something that’s quite easy to misreport, especially in the rush to meet deadlines.

I have questions. How sure are you that antibodies will be produced within 13 days? What are the chances the test is wrong even if antibodies are present? These are all valid inquiries into the science, in effect testing for the truth.

But what if he is misquoted? Worse, what if he is intentionally misquoted by people with an agenda? We are extremely fortunate to be living in a time when it’s easy for us to call up the actual press conference on our computer screens and listen firsthand to what is being said. But even having that in front of you will not stop debates.

The way that US President Donald Trump played a video to “prove” to the media in the press briefing room that he was right and they were wrong would be hilarious if it didn’t come with sobering reality that right now, more than 25,000 Americans have died from the disease. Suddenly, the President’s recent decision to stop US funding of the WHO is a clear case of cutting off those in-the-know to spite ... well, everybody who disagrees with you.

Ultimately, this unhealthy conflict between politics and science has created doubt and fear, as well as a rising death toll in the United States. One of the things to be thankful for in Malaysia is that, with the odd exception, politics has kept its confusing paddle out of evidence-based medicine.

Of course, policies and politics may change, and as the Covid-19 situation improves, the importance (and perceived dispensability) of the Health Ministry and its personnel will adjust accordingly. But like the advice on test kits, you can change your mind, just as long as you have a good, preferably evidence-based, reason for it.

Logic is the antithesis of emotion but mathematician-turned-scriptwriter Dzof Azmi’s theory is that people need both to make sense of life’s vagaries and contradictions. Write to Dzof at lifestyle@thestar.com.my. The views expressed here are entirely the writer’s own. 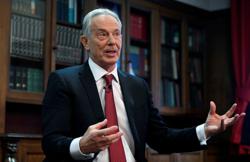