Mohammad Ibrahim, five, attending an online class at home in Islamabad, Pakistan, while schools are closed during the Covid-19 lockdown. — AFP

Did you know that Malaysia has had an online learning platform ready to roll out since the middle of 2019? Today I’m writing about how far the theory is from practice, and sharing with you the adventure we had trying to use it for just one classroom.

I call it an “adventure” because very little could be predicted, and we had lots of problems to solve, and really, most of the time we didn’t know what we were doing. Also, according to experts at the Education Ministry and beyond, distance education doesn’t really work in Malaysia. Fortunately, these were things I didn’t know when we began.

It started with a discussion with other parents in the classroom about what would happen if the country's movement control order (MCO) – first initiated on March 18, 2020, to limit the spread of Covid-19 – was extended beyond its initial two weeks (hint: it was). The consensus was clear: Our goal was to make sure that the kids and teachers could do schoolwork from home.

But what exactly did that mean? The silver lining was the Education Ministry’s Digital Learning Platform (DLP) at moe-dl.edu.my, and more importantly, that every student and teacher in Malaysia could already log on to it. Easy, right? 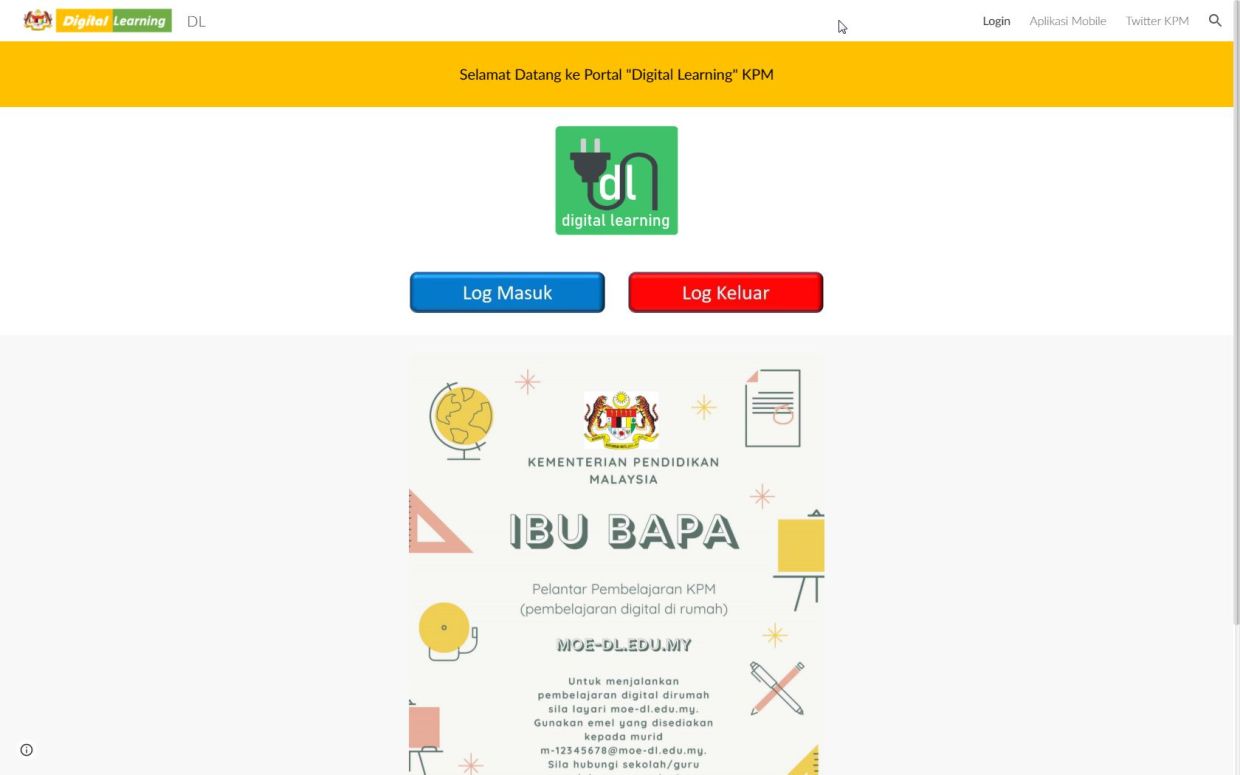 A screen capture of the Education Ministry’s Digital Learning Platform main page.Through a stroke of good luck, the class teacher had usernames and passwords for all the students in her class. Through a stroke of bad luck, she had balik kampung (returned to her hometown) at the start of the school holidays, and thus was stuck in a remote area with poor Internet access. In fact, we also knew of at least two students in similar situations.

This is one of the reasons given by some why distance learning will not work in Malaysia: Not everybody has good Internet access. Yet, as my friend who works at Open University can attest, distance learning has been happening before Internet access was common place. At that time, they used these technologies called “telephones” and would at times hand in work with such newfangled gizmos as “fax machines”.

On our part, we were already thinking about how SMS texts could be used by teachers to communicate with students. A second idea was whether it was practical to send work by conventional post. It would be inconvenient but doable.

Yet, what we found out was that “limited Internet access” wasn’t “no Internet access”. People learned where and when good reception could be found. And, fortunately, the DLP kind of works even with narrow bandwidth.

But logging in was just the first step. How could teachers and students use the online resources available? I think it is interesting that despite the numerous educational games and videos available on the platform, many teachers and users zoomed in on a feature that had no ready-made content and would probably need the greatest amount of effort to make it work: Google Classroom.

Google Classroom helps teachers teach an online class. It is as simple or as sophisticated as you want it to be. You can post a photo of a worksheet as an assignment and the kids can submit answers through a form. Or you can run a full on video conference with the teacher and all students. In practice, because of poor Internet access, not all teachers could access all features. But they could set weekly work.

Another issue we had were students from large families who had to share one computer. In a group of kids who have national exams coming up, Year Two kids just have to wait their turn to use the home PC. This is the second reason given why “distance learning won’t work in Malaysia”. A study by the Education Ministry in April 2020 showed that 36.9% of students nationwide do not possess any electronic devices.

Of course, that isn’t the same as not having access. My eight-year-old daughter doesn’t own any electronic devices but she has access to plenty. Similarly, a study by the Malaysian Communications and Multimedia Commission in 2017 reported that 75.9% of Malaysians own smartphones, so the chances are a child at least knows (if he/she wasn’t already related) to somebody who owns a device. But how many PCs does a household realistically have?

We did discuss buying cheap refurbished laptops online (prices start at around RM300) and lending them to families short of devices (with an option for them to buy them from us later if they find they like it). But in the end, we realised that you could install an app for Google Classroom on any smartphone and it worked pretty well (in some ways better than on a PC). Parents just managed with what they had.

That is fundamentally the short version of our experience: We tried things, and when they didn’t work, we kept trying until something did.

Now we have teachers assigning work every week, and our daughter does her schoolwork every morning. One teacher even talked about continuing using the system after the MCO is lifted because it’s so much easier and more flexible than managing manual workbooks.

But I have to admit we’re taking a big risk here. We are just one class of 33 children. We used our judgement to leverage an official Education Ministry platform. But tomorrow the school or the ministry could tell us that the decision has been made to use something else. There is no clear policy, no roadmap for how to progress.

Nevertheless, I think if we care about our children’s education, we have to try it. Try it and talk about it. Talk with teachers, talk with parent-teacher associations, talk with the 35,000 educators already on the Malaysia Google Classroom Telegram group. And then keep trying until you figure out a way around the problems. Even if you live in a place with no electricity.

Because the objective is the education of the child. The objective is that learning doesn’t stop just because we can’t go to school, or we have no Internet access. And the decision “not to do it” doesn’t get us anywhere closer to our objective.