'Eye On The Ball' opens in cinemas nationwide on Thursday. — Handout

The cliché is well-known: All children who are competing must get a medal or an award of some kind, regardless of whether they finish first or not, and even if they come in last.

The concept of the “participation trophy” probably began with good intentions but it has now become a negative thing. You don’t have to try anymore to win, just turn up.

But clichés are based on truths, and just last week I saw a parent so upset that their child was upset on sports day that they – you guessed it – suggested that we should pool together funds to get every child a consolation medal.

Perhaps it’s hard to see the forest for the trees, but I’m sure we’ve watched enough Disney movies in our time to know that adversity is what is needed to learn from so we can eventually succeed – even more so if the main character has a disability of some sort. And there all those sports shows on how the human spirit overcomes prejudice and inspires others.

Which then may surprise you that this isn’t really the main thrust of the new documentary Eye On The Ball. (Disclosure: The film is directed by my friend Chen Yih Wen, and my wife helped translate some of its subtitles. And it was made by Star Media Group’s award-winning R.AGE team.)

Eye On The Ball is about the trials and tribulations faced by the Malaysian blind football team. Perhaps the first thing that strikes you about the documentary is that blind people can play football, and do it with no small degree of skill. 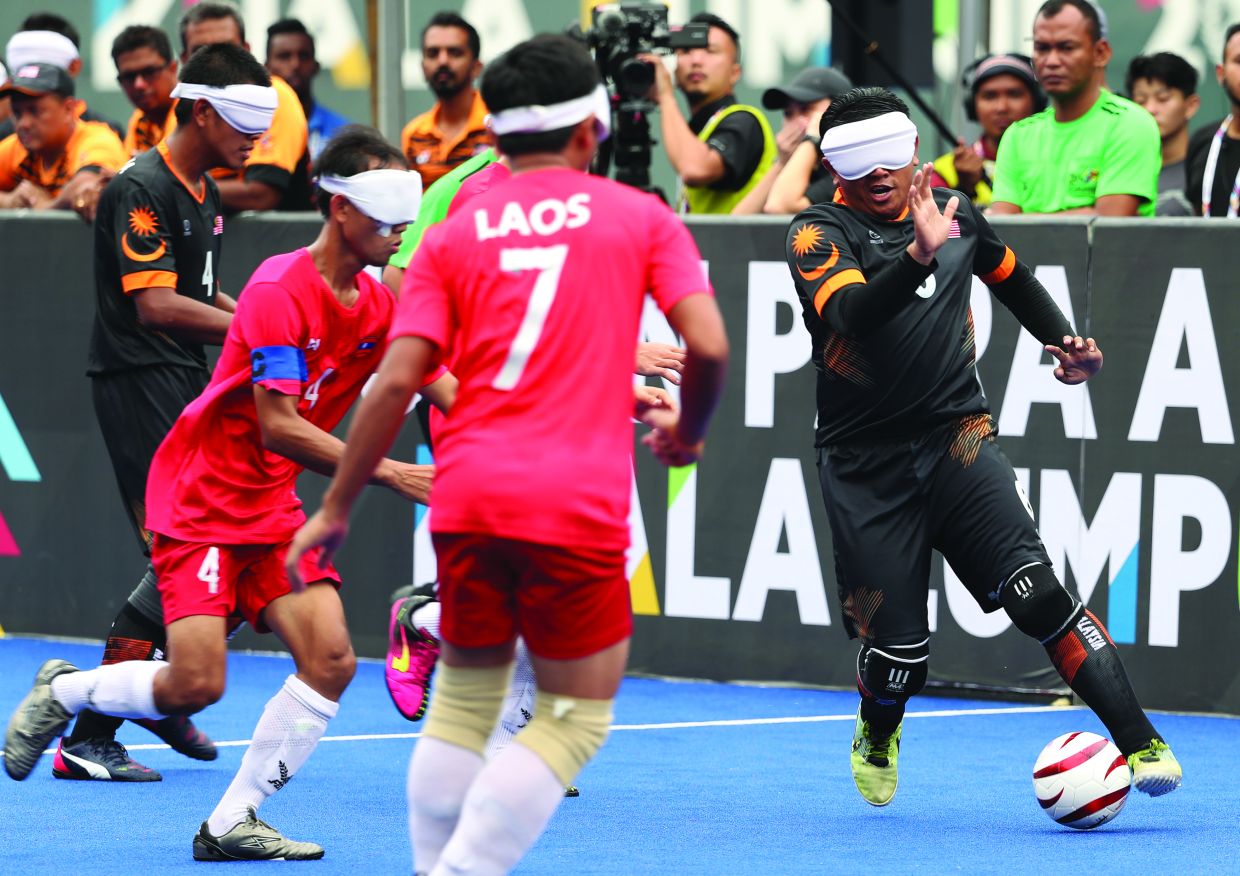 The Malaysian Blind Football team on the pitch against Laos. — Handout

But the show spends little time on how hard it is to kick a moving ball if you can’t see it (even if it has bells on). In fact, in a certain way, it spends very little time talking about the team members’ condition (don’t call it a “handicap”). Instead, it takes us into the world of these footballers. In fact, the ones who are mindful of their blindness are not the players themselves but their families, who maybe question what it is they can do to earn a living, being unlike “normal” people.

To the coach and the players, the obstacle to overcome is the game rather than their physical limits. And to the film’s credit, you’re not asked to feel pity for them because they are blind but rather to just accept the normalcy of the situation for them.

Still, you are reminded continually of how different life is for them. Like when they visit a museum then confess they found it boring because they weren’t allowed to touch most of the exhibits. Or the way they play with playing cards that look normal, until you notice the Braille marks in the corner.

But otherwise, they’re fairly normal kids, who, in between the serious business of football, also want to have fun. They have hopes and fears, and are at that age when they are shaping their outlook on life. The hope, of course, is that the football gives them the structure and platform to eventually succeed.

(At this point, I feel I need to add that my friend, the director, was asked by one viewer if the characters in the documentary were actors and working off a script. Her answer was that if they were acting, then she’s one heck of a director!)

Eventually, you come to accept who they are and don’t even question what they’re capable of. Truth is, the segment about the documentary that most upset me was when we see the coach having to travel all around Kuala Lumpur looking for a suitable playing field to train on. You see, the official one at the training centre is of the wrong size. Understand that this is a team that had already won gold at the 2015 Asean para games and have aspirations to go all the way to the Asian level.

So overcoming obstacles isn’t just about winning or losing. Yes, the result matters when it’s just after a game, but that importance shrinks fast when looked at in the context of the bigger picture. Because life doesn’t stop when you’ve won a game, or a championship, or the top prize. An article in 2014 noted that eight out of the 11 England football World Cup winners had sold their medals, and given that England has only won one World Cup in its history, in 1966, its clear that winning might be great but so is supporting yourself (the last medal sold for £47,000 – or RM256,000 – if you’re interested).

We already know what builds character isn’t what happens when things go well, but how you react when things go badly. And the terrible truth is twofold: That sometimes you have to overcome problems not of your own making; and that you can do nothing wrong but still end up on the losing side.

To me Eye On The Ball shows its characters not as blind heroes coping in the world but as humans that happen to be blind. You don’t give them a consolation prize for getting on with their life, and truth is, they don’t ask for one.

But they’re not immune to pain or disappointment or plain old human failure. If life is about learning from mistakes, then sports is like a simulation of life that allows you to fail without consequence.

So we should all not only encourage kids to take part in sports but also fairly prepare them for what happens when they fail. Perhaps, most importantly, is the need to persevere and keep striving for excellence. “This may be one game that you lost,” coach Sunny Shalesh says at one point in Eye On The Ball, “but there are many more games to come”.

(Eye On The Ball opens in cinemas nationwide on Thursday.) Logic is the antithesis of emotion but mathematician-turned-scriptwriter Dzof Azmi’s theory is that people need both to make sense of life’s vagaries and contradictions. Write to Dzof at lifestyle@thestar.com.my. The views expressed here are entirely the writer’s own.
Article type: metered
User Type: anonymous web
User Status:
Campaign ID: 1
Cxense type: free
User access status: 3

When walking down a grocery store aisle could lead to the altar
Anti-smoking Bill: Where there’s smoke, there’s a whole lot of hot air
How the shed at the back of the garden is becoming a home
Cows have many hidden skills, from doing tricks to offering rides, coaches say
Scientists are calling for more research into 'climate endgame'
Munich's Oktoberfest finally back on after pandemic pause
Dear Thelma: My wife doesn't want to have sex anymore after having children
'Heatflation,' or how global warming contributes to a rise in prices
Ride a bamboo MTB for the ultimate in sustainable offroad cycling
History of the ‘ridiculously charming’ penguins