The best way to maintain a robust population of wild tigers

Dr Goodrich with Morka, a tigress infected with the canine distemper disease virus, in 2003 in Siberia; the animal later died. Researchers estimated that at least 1% of the Siberian tiger population – numbering between 250 and 400 at the time – died of the disease between 2009 and 2013. — JOHN GOODRICH WCS/ panthera.org

Tiger expert Dr John Goodrich was researching Siberian tigers when he stumbled on an animal infected with the canine distemper virus (CDV) in Pokrovka, Russia, in 2003.

Like the tigers in Mersing and Dungun (see story here), the animal had – as recounted by Goodrich to National Geographic – “just walked into town and sat down”.

“I am aware of both cases in Malaysia and agree that it raises concerns for tiger health, ” says Dr Goodrich via email.

He was working with the Wildlife Conservation Society in 2003. Today, he is chief scientist and tiger programme director at conservation organisation Panthera and acknowledged as one of the world’s preeminent tiger biologists. He also serves in the IUCN (International Union for Conservation of Nature) Cat Specialist Group.

Dr Goodrich says no attempt was made to contain the disease at that time. “That is, it was allowed to run its course. There was no vaccination campaign for dogs, ” he says, replying to our question about whether Russian scientists embarked on a dog vaccination programme to help curb the disease.

While he believes that vaccinating dogs against infectious diseases is “always a good idea” because it promotes the health of domestic animals and can reduce the transmission of diseases among domestic and wild animals and humans, it is “not necessarily the best use of conservation funds for tigers as an emergency measure”.

“That is because while dogs may transmit canine distemper to tigers, there are many, many species of wild carnivores that are susceptible to and can act as reservoirs of canine distemper, ” he points out.

And in Russia, Dr Goodrich further elaborates, the CDV is likely endemic in a variety of wild carnivores, such as foxes and raccoon dogs, that serve as reservoirs for the disease. As tigers regularly interact with these smaller carnivores, often killing them for food, they can be exposed to the virus.

“Vaccinating domestic dogs may not have the intended impact on the prevalence of the disease in tigers because they get it from wild species anyway.

“Bottom line is that if research shows that domestic dogs and not wild carnivores are the key reservoir of the disease, then a vaccination campaign may help to protect tigers but it is likely that wild populations of other carnivore species are acting as reservoirs, ” says Dr Goodrich.

He says from his observation in the Siberian tigers case, it is imperative that animals are first diagnosed only based on the detection of the actual virus in them. This is because the presence of antibodies indicates only that an animal has been exposed sometime in the past and it might not be a current infection, he explains.

“Clinical diagnoses based on symptoms are often erroneous because there are other common neurologic diseases – for example, rabies, brain tumors, or even tapeworm cysts – that show very similar symptoms, ” he warns.

Like WWF-Malaysia’s Dr Mark Rayan Darmaraj, Dr Goodrich believes that having interconnected forest tracts is crucial to the survival of the Malayan tiger against the CDV.

The best defence to protecting tigers from the CDV and other infectious diseases is to maintain large, healthy populations through having vast expanses of forest, he stresses.

This is because while the CDV outbreak did result in significant loss of tigers from the study area in Russia, the population rebounded after that particular surge of infection was over.

“This was because it (the study area) was part of a large population of tigers covering some 100,000sq km of contiguous habitat.”

“Peninsular Malaysia is fortunate in that it still has vast tracts of intact forests large enough to contain a very robust tiger population.

“Maintaining this forest and protecting its tigers and their prey from poaching is the best way to secure the future of Malayan tigers.” 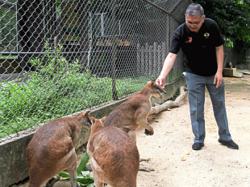 Tiger fans climb ladders, peer through fences to cheer on their hero