Singapore and Vietnam are growing in importance as ports through which pangolins are illegally transported.

A new report says that not only is the illegal trade in pangolins growing but that Singapore – one of the glitziest, most developed cities in Asia – is a hub that sees hundreds of tonnes of products worth billions of dollars passing through.

The city state’s port – one of the world’s busiest at 2.79 billion gross tonnes in annual vessel arrival tonnage in 2018 – is among the top six countries and territories disproportionately linked to the trade that is pushing the pangolin towards extinction, says the Wildlife Justice Commission (WJC).

Together with China, the Congo, Hong Kong, Nigeria and Vietnam, Singapore is linked to 94%, or 193 tonnes of the 206.4 tonnes of seized pangolin scales between 2016 and 2019, according to the WJC’s report, Scaling Up: The Rapid Growth In The Industrial-Scale Trafficking Of Pangolin Scales (2016-2019).

“The smuggling of pangolin scales between 2016 and 2019 reached alarming levels, with significant increases in the number of specimens being seized annually, including record-breaking seizures last year, ” says the report.

Before last year, Singapore, says the report, barely featured in the supply chain. “However, several high-volume shipments were detected in 2019, including the discovery of two containers, five days apart, containing a combined total of 25.6 tonnes of pangolin scales, and a third seizure in July 2019 of 11.9 tonnes of scales and 8.8 tonnes of (elephant) ivory.”

Malaysia is eighth on the list of countries and territories ranked according to the highest weight of pangolin scales seized. Pangolin meat can retail at up to US$350 (RM1,400) per kilo here. 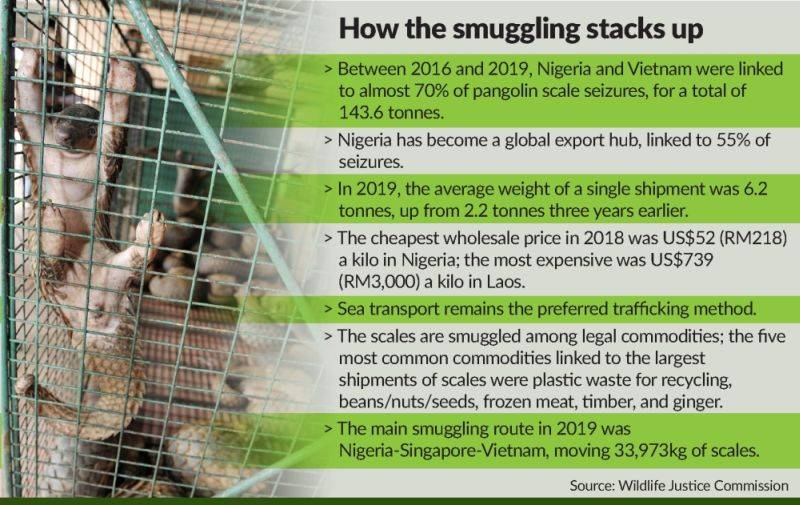 According to the WJC report, detection rates in Singapore (meaning the proportion of seizures in the country compared with shipments) was 33.3% compared with 100% in Hong Kong, 50% in China, 40% in Vietnam and 16.7% in Nigeria.

“Calculations based on the data indicate that Nigeria and Singapore have scored the lowest detection rates of almost all involved countries.

“In the case of Singapore, the low rate is most likely due to traffickers taking advantage of the fact that transhipment hubs do not have the capacity to inspect every container, ” the report says, adding that corruption may also be a factor, particularly in Nigeria.

Singapore’s animal welfare charity group, Animal Concerns Research and Education Society (Acres) deputy chief executive Anbarasi Boopal says in an email reply to our questions that it is commendable that Singapore has put a huge dent in the pangolin trade through last year’s seizures.

“However, the detection rates in the report also show a pressing need to have measures in place to tackle the issue, ” he says, pointing to a recent media report quoting a government official on a new system to detect and catch illegal goods passing through the port.

On May 8,2019, Singapore’s Senior Parliamentary Secretary for National Development, Sun Xueling, told Parliament that both the Home Affairs Ministry and the Immigration and Checkpoints Authority were testing a prototype of the multimode passive detection system (MMPDS), an automatic scanning system that uses machine-learning algorithms to detect explosives, drugs, humans and other contraband.

“We are hopeful about the recent media report that the government will be testing a prototype of MMPDS to detect illicit goods, ” says Anbarasi.

“We hope such stricter measures will make things challenging for the illegal wildlife trade to continue to flourish.” Singapore’s port is one of the world’s busiest – and among the top six countries and territories linked to the smuggling of pangolins and pangolin products. The other five are China, the Congo, Hong Kong, Nigeria and Vietnam. — Visual Hunt/Peter Garnhum

Singapore has also been identified by the WJC as the primary transit country in terms of volume of illegal pangolin shipments, with the majority of them originating in Nigeria. As of Feb 24, the Maritime and Port Authority of Singapore had not responded to email queries from The Star.

Other major transit countries are Hong Kong and Vietnam and, surprisingly, although the main destinations for the scales remain China and Vietnam, the latter took over the lead as the primary country in 2018.

The WJC report indicates several trafficking routes, identifying the Nigeria-(Singapore)-Vietnam route as a significant one for the smuggling of scales on their own or in combination with elephant ivory.

“A direct trafficking route between Nigeria and Vietnam is relatively new, having only been documented since May 2018.”

Nigeria and Vietnam reportedly play prominent roles in the supply chain: “Between 2016 and 2019, they were linked to almost 70% of pangolin scale seizures, which amounted to 143.6 tonnes. Between 2018 and 2019, this prevalence increased, as 84% of all detected shipments involved one or both countries.”

Criminals previously involved in the ivory trade are now getting into the trafficking of pangolin scales.

“The smuggling of ivory combined with pangolin scales is rapidly increasing, doubling in number and tripling in volume between 2017 and 2018.

“Increasingly, combined shipments have a greater proportion of pangolin scales than ivory, ” the report says, pointing to the likelihood of the same syndicates being involved in both trades.