A university in China says that pangolins could potentially be an intermediate host of the Covid-19 coronavirus. — StarGraphics

If we don’t care that the ongoing illegal trade in pangolins threatens their very existence, perhaps humankind will pay attention to a more self-interested reason to stop trafficking in these mammals: they are potentially an intermediary host for the Covid-19 virus.

All eight species of the pangolin are protected under Appendix 1 of Cites (the Convention on International Trade in Endangered Species of Wild Fauna and Flora), which means a complete ban on any kind of trade. However, this has not stopped increasing numbers of pangolins being poached for trade.

But with the South China Agricultural University announcing that the animal is “potentially” an intermediate host for the Covid-19 virus, trafficking in pangolins has the potential to become a serious public health concern.

This is particularly so when most of the countries named in the latest Wildlife Justice Commission’s report as transit countries for the illegal pangolin trade – Hong Kong, Singapore and Vietnam – and its destination, China, have all recorded cases of Covid-19. While most of the cases involve those who recently travelled to China or had contact with Chinese nationals, some appear to be clusters of human-to-human transmissions within these countries. (See "Routes of a dark trade".)

As is widely known now, Covid-19 is a new coronavirus that reportedly emerged from a market in Wuhan, the epicentre of the outbreak that has killed over 2,000 people and sickened over 70,000 (at press time). The capital of the Hubei province had an active trade in wildlife meat, including that of pangolins.

In fact, the Commission’s report – Scaling Up: The Rapid Growth In The Industrial-Scale Trafficking Of Pangolin Scales (2016-2019) – says that pangolin meat and scales are considered a luxury throughout Asia, especially in China and Vietnam. It is also favoured in Africa: “(Pangolin meat) is considered a delicacy in Africa, with the largest consumer appearing to be Nigeria with its wealthy middle class and large Chinese communities.” Pangolin scales are used in traditional Chinese medicine to treat a host of ailments while the meat is cooked in a soup thought to have nutritional benefits. There is no scientific backing for any of these uses.

The Commission’s report also confirms the involvement of Asian nationals in the trafficking of scales everywhere, from Africa to Asia, although it does not specifically state nationalities.

Is this too much of a coincidence or can conservationists hope for a break that can finally put a halt to, or at least slow down, this heinous trade?

Scientists and conservationists, however, are advising caution.

According to a report by China’s news agency Xinhua, the university’s conclusion is based on the finding that the genome sequence of the coronavirus strain in pangolins is 99% identical to the one found in people infected with Covid-19. University president Liu Yahong is quoted as saying that the research team analysed more than 1,000 metagenome samples of wild animals and found pangolins to be the most likely intermediate host. (Bats remain the highly likely primary host for Covid-19.)

However, Sabah’s Danau Girang Field Centre director Dr Benoit Goosens says, as far as he knows, the university’s results have neither been peer-reviewed nor published in a scientific journal.

“I would take this with caution. It could easily be contamination.

“But if it is true, I hope it can help decrease the poaching of and trafficking in the species, ” he says via email.

He points out that even though it is well-known that the Ebola virus in Africa can be carried by the great apes, the information has not really decreased the poaching of these animals – and this despite the fact that the Ebola virus disease has a much higher mortality rate than Covid-19.

“One thing is certain, though, we will face this issue (zoonotic diseases) more and more as people encroach into wild habitats, ” warns Dr Goosens.

Asked if wildlife consumption contributes to the emergence of zoonotic diseases, Dr Goosens says: “Yes, definitely. And not only pangolins.” 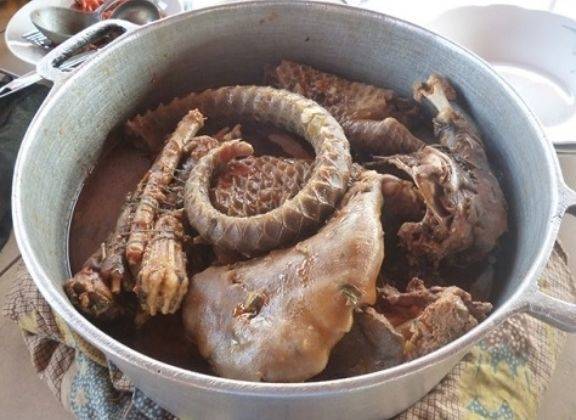 A dish made up of pangolin meat, believed to be in Africa.

The Chinese government thinks so too. Xinhua reported on Feb 17 that the country’s Standing Committee of the National People’s Congress is expected to fast-track a ban on the trade and consumption of wild animals. A multi-department joint task force was also announced that will target the illegal wildlife trade.

Even China celebrities like Angelababy, Huang Xiaoming and Kris Wu are taking to microblogging site Weibo to urge people to say no to the consumption of wildlife. “To save wildlife is to save (ourselves), ” they chorus.

Not only is the Covid-19 virus thought to originate from wildlife, so are some of the most recent global disease outbreaks, such as severe acute respiratory syndrome (SARS) with a mortality rate of up to 50% depending on age groups, and the Middle East respiratory syndrome coronavirus (MERS-CoV) that kills over 37% of the people it infects. The fetus of a baby pangolin preserved in wine, believed to be in Vietnam.SARS, also caused by a coronavirus, is thought to have originated from wild civet cats sold in markets in southern China, although there are now theories that bats may have been the primary host; MERS-CoV is found among camels.

The Nipah virus, which hit pig farmers in Negri Sembilan in the 1990s, and which kills between 50% to 70% of the people it infects, is a paramyxovirus harboured by fruit bats.

Universiti Malaya graduate Dr Chua Kaw Bing, now a senior principal investigator at Singapore’s Temasek Life Sciences, played a central role in the discovery of the Nipah virus. While he is currently engaged in dengue research and is not directly involved in any infectious disease outbreak investigation, he points to a paper that he co-authored with two others in 2002.

The paper, Anthropogenic Deforestation, El Nino and the Emergence of the Nipah Virus in Malaysia, presents data indicating that the loss of the habitat of two types of bats – the Malayan flying fox and the island flying fox – via slash and burn techniques (that also resulted in haze), together with the dry El Nino season of 1997/1998 led to a reduction in the availability of the flowering and fruiting trees on which the bats forage. “... and this culminated in the unprecedented encroachment of fruit bats into cultivated fruit orchards in 1997/1998”.

These events, the paper argues, coupled with the locations of piggeries in orchards and their design, allowed for the transmission of the virus from the natural reservoir host to the pigs and, ultimately, the human population.

In other words, we ignore our wildlife and environment at our own peril. A university in China says that pangolins could potentially be an intermediate host of the Covid-19 coronavirus. — StarGraphics

(FILES) In this file photo taken on June 30,2017, a juvenile Sunda pangolin feeds on termites at the Singapore Zoo. - The endangered pangolin may be the link that facilitated the spread of the novel coronavirus across China, Chinese scientists said on February 7,2020. Researchers at the South China Agricultural University have identified the scaly mammal as a "potential intermediate host, " the university said in a statement, without providing further details. (Photo by ROSLAN RAHMAN/ AFP)

The fetus of a baby pangolin preserved in wine, believed to be in Vietnam.

A dish made up of pangolin meat, believed to be in Africa.

Pangolin scales being openly offered for sale in a Facebook group believed to be based in China. All eight species are now threatened with extinction, according to IUCN while the pangolin species in Malaysia, the Sunda Pangolin, is classified as critically endangered. In 2016, all eight species were put under Appendix 1 of CITES, which means trade of the animal and its parts are banned. (PLEASE DO NOT USE UNLESS ALL PERSONAL DETAILS ARE BLURRED OUT).

Pangolin scales being openly offered for sale in a Facebook group believed to be based in China. All eight species are now threatened with extinction, according to IUCN while the pangolin species in Malaysia, the Sunda Pangolin, is classified as critically endangered. In 2016, all eight species were put under Appendix 1 of CITES, which means trade of the animal and its parts are banned. (PLEASE DO NOT USE UNLESS ALL PERSONAL DETAILS ARE BLURRED OUT).