Covid-19 brings debutante ball traditions to a halt in LA

Ashley Soltero (left), and her cousin learning dance moves under the guidance of choreographer Cynthia Garcia (centre) for an upcoming quinceanera in El Monte, California, on March 22.

If Ashley Soltero had turned 15 in any other year, her quinceanera would have been much, much different.

But it’s 2020 and Covid-19 has swept the globe. Now it’s a season of lost rituals: prom, grad night, walking across a stage to receive a diploma and, for Latino families in LA and beyond, the quinceanera. As unsettling as postponements and cancellations may be for the young, they may be even harder for parents who have invested so much of themselves in their children.

Soltero and her mother, Evelyn Yanez, have been planning her birthday celebration for a year.

“I think she’s more excited, because I’m her only child, ” Ashley said. “She wants the best for me, you know?”

A quinceanera is part debutante ball, part coming-of-age ritual with religious overtones. The celebration starts with a Mass. Parents hire photographers, bands and choreographers to make sure the party afterward is perfect. In places with huge Mexican American populations like LA, quinceaneras are part of the cultural lifeblood of the city and region.

Ashley, who turns 15 on April 8, planned to stick with tradition. She would dance with her father. He would change her shoes from flats to high heels – symbolising the step into adulthood. She would receive her last doll, a sign of leaving childhood behind.

On a recent Sunday, in hopes that her celebration might go on as planned in May, Ashley practised dance steps underneath the shade of a grey tarp in her grandparents’ driveway in El Monte. It’s where her mother and her tias practised for their own quinces decades ago, although now they danced on concrete instead of dirt. 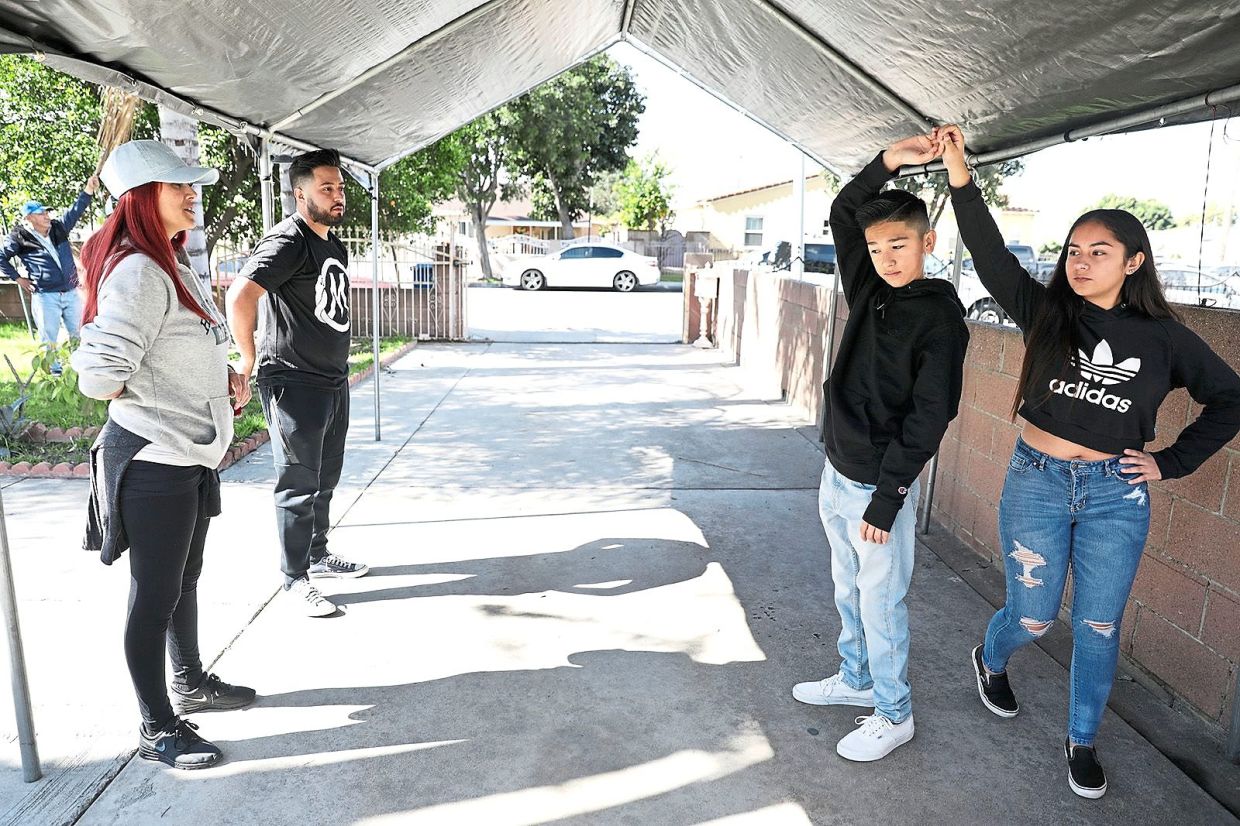 A mariachi version of Tale As Old As Time, a song from the film Beauty And The Beast, filled the morning quiet that enveloped the neighbourhood. The day before, all public and private gatherings had been prohibited anywhere within the jurisdiction of the Los Angeles County Department of Public Health. The dance practice included hand sanitiser and as much distancing as possible.

Yanez had already paid a dance instructor for this second practice. And what if the quinceanera isn’t delayed, she reasoned, and none of her daughter’s quince court know the dance steps? What if the music plays and they just stand there in their elaborate party clothes?

Only six of the nine chambelanes showed up. One mother asked her son if he was sure he wanted to go, concerned about the coronavirus. Garcia spent most of practice rehashing last week’s steps. If everyone had showed up, they could have practised new moves, like lifting Ashley.

The girl’s waist-length dark brown hair swayed with each slow turn, the speed chosen to accommodate the ball-gown-like charro dress she would wear the night of her party. For now, she wore a cropped black Adidas sweater and ripped blue jeans. The tarp protected the dancers from the sun beating down that morning.

The chambelan de honour, Ashley’s 11-year-old cousin, rubbed sleep from his eyes before taking her hands in his. The two boys on each side of her pivoted in Vans and jeans. For one, it was his sixth quince as a chambelan. For another, his fourth. A couple of them are in quinces that have been postponed.

Over the past few weeks, Garcia has seen empty quinceanera venues and celebrations postponed after venues have cancelled. At a quince on March 14, only half of the invited guests showed up. A group of young people practising their dance steps for Ashley Soltero's debutante ball, which has now been postponed due to the coronavirus outbreak.

The industry has taken a hit across the country, as state restrictions force families to postpone events indefinitely.

In the Central Valley, one venue allowed a family to reschedule from March 28 to a date in the summer. The only problem? The teenager’s friend was having a separate quinceanera that same day.

“It’s sad for the quince, ” choreographer Noemi Ruffin said, referring to the birthday girl, “because now she might have a court without her friends.”

In early March, Ashley grew worried after a friend postponed her quinceanera, and she wondered if she might have to do the same. The teenager has held off on announcing hers for that reason.

Still, her family has soldiered on. Ashley is the youngest girl in the immediate family, and this would be the last quinceanera they would celebrate for a long time. They’ve held off on cancelling anything for fear of losing their deposits.

Ashley went for a dress fitting in Riverside recently. (To her father’s dismay, she picked out a black dress – it had yellow, red and blue flowers trailing down the bodice.)

The invitations, which match the teenager’s dress, welcome guests to a fiesta “el 2 de mayo del 2020”. Yanez’s mother told her she needed to send out RSVP cards, because it was unclear who would attend due to “el virus”.

If it happens in May, Ashley’s special day will include a Spanish-language Mass at 2pm and a reception that afternoon. Her family has booked the hall, Mariachi Lindas Mexicanas, and a group to play banda, traditional brass-based Mexican music. By this month, Yanez has to pay for food for 300 people.

But now, unexpectedly, she’s also having to apply for unemployment. Two weeks ago, she was laid off from a wholesale store for sunglasses where she’d worked since her senior year of high school. Across the state, workers are losing jobs as counties order the closure of non-essential businesses.

“I am stressed and I am worried, but I have that hope. I don’t want to lose that hope that this is all going to be over with, ” Yanez said, her hands clasped in her lap. “She’s my only daughter. I want to do everything for her.”

Yanez’s parents tried to do the same for their three daughters. The couple met in El Monte soon after immigrating from Mexico in 1974. They raised their children there.

Her father, Ysidro Yanez, spent 44 years working in a company that made cabinet doors. In Mexico, where his parents were farm workers, there was never enough money to celebrate Christmas. In the United States, he made sure that all his daughters had a quinceanera.

At Yanez’s quinceanera in Baldwin Park, police had to come because there was so much traffic. She likened it to the lines outside of grocery stores due to panic buying. The hall, which could hold 500, had to close its doors because so many people turned up.

“I’ve always wanted my daughters to have more than what I had, ” said Alma Yanez, who is Evelyn’s mother and Ashley’s grandmother. “I think that’s our purpose as parents. We want them to have what we never did.”

For Ashley’s quince, her grandparents are helping pay for the hall, the cake and centerpieces from Mexico – bottles that will be topped with sombreros for her “fiesta Mexicana”. Grandfather and granddaughter will dance together, just as Ysidro danced with his daughters years ago.

As Ashley and her friends danced in the frontyard, her grandfather and another man cut dead palm fronds from a tree. The rest of her family sat nearby and watched the practice.

It was an odd feeling for the teenager, who doesn’t like to be the centre of attention. But she took it in stride, her cheeks dimpling with every smile.

The 14-year-old said she worried that her mother was even more stressed out than she was about the possibility of a delay, of this milestone going by unnoticed.

That, she said, hurts most of all. – Tribune News Service/Los Angeles Times/Brittny Mejia

Hi, neighbour! I know what you had for supper last night

Mak Yong, one of Malaysia's oldest forms of dance theatre, is a Unesco 'masterpiece'