The process of stretching combined with deep breathing patterns allows more oxygen to be circulated throughout the body and enables it to relax, potentially resulting in a yawn. — 123rf.com

With the relaxed ruling allowing us to jog or cycle in our neighbourhood during the current movement control order, more people are taking the opportunity to exercise outdoors.

The past week’s weather has been glorious with nice evening breezes, and the reduction in vehicles means the air is a tad less polluted.

However, what is different this time is I see a lot more people yawning as they start on their runs and brisk walks.

Yes, they are yawning big, and sometimes so loud that the pets do a double take and prick their ears up.

Now, I’ve seen many of my students yawn during early morning theory classes, and from what I know, it’s probably due to lack of sleep, the need for more oxygen, late nights or sheer fatigue.

Rarely are these teenagers on medications that cause drowsiness.

They will try to stifle the yawn and the cheeks puff up ... oh, you know how it looks and feels.

Believe it or not, yawning serves to keep us awake, not put us to sleep.

The deep intake of breath and accompanying facial contractions that occur when we yawn increases blood flow to the brain and stimulates the neural area responsible for encouraging us to be more alert, conscious and self-reflective.

The facial contractions also serve to lubricate the eyes and provide clearer vision, while stretching the eardrums to improve listening focus.

But how about purposely yawning prior to exercise?

Yes, there is apparently a connection between yawning and exercise – and it’s not an indication that you’d really rather be in bed than doing some physical activity. Taking a break during training can cause you to yawn, either to help decrease the temperature in your brain or to compensate for uneven breathing. — Photos: Filepic

Many photographers have captured him with his jaw wide open on camera.

Spectators assumed it was the result of overtraining, but when asked, he would shrug it off, saying it was just his way of preparing for competitions.

It could have also been a sign of stress and a way of relieving tension before a major race.

A study published in the journal Adaptive Human Behavior and Physiology shows that stress elicits yawning.

When you’re stressed (or anxious or excited), the sympathetic nervous system is activated.

Once the system kicks into gear, the core temperature rises, which increases the temperature of the brain as well.

To cool the brain down, the natural body reflex is to yawn.

Yawning forces you to take a deep breath, pulling in cool air from the outside, which cools your blood vessels, then your brain as it travels up the arteries.

Perhaps my neighbourhood folks are a stressed lot, so once they step out of their houses, they take a big yawn and start their exercise.

Cardiorespiratory workouts don’t elicit yawning as much as resistance training because there is “no time” for it.

Constantly moving during aerobic workouts means that your body is adequately taking in oxygen, so there is no need for a big yawn.

An exception is high intensity interval training (HIIT), where there is a brief break after a short period of maximum effort.

Your core temperature fires up as a response to movement, which can induce a yawn to decrease the temperature in the brain.

Essentially, you have to be still to yawn.

With strength training, especially if you’re performing movements such as squats or deadlifts that attack larger muscle groups, there are usually many rest periods between sets.

As your body is not maintaining a steady breathing rate, there is a tendency to yawn during these rest periods.

Many people also find themselves yawning while they are doing yoga.

The process of stretching, combined with deep inhalation breathing patterns, allows more oxygen to be circulated throughout the body and enables it to relax (i.e. the parasympathetic nervous system is stimulated).

If you experience frequent yawning during exercise and you’re not particularly tired or lacking sleep, it could also be a sign that the routine is boring and not challenging, so consider switching it up.

You yawn, I yawn

You may have also heard people saying that yawning is contagious and there’s a certain amount of truth to this. 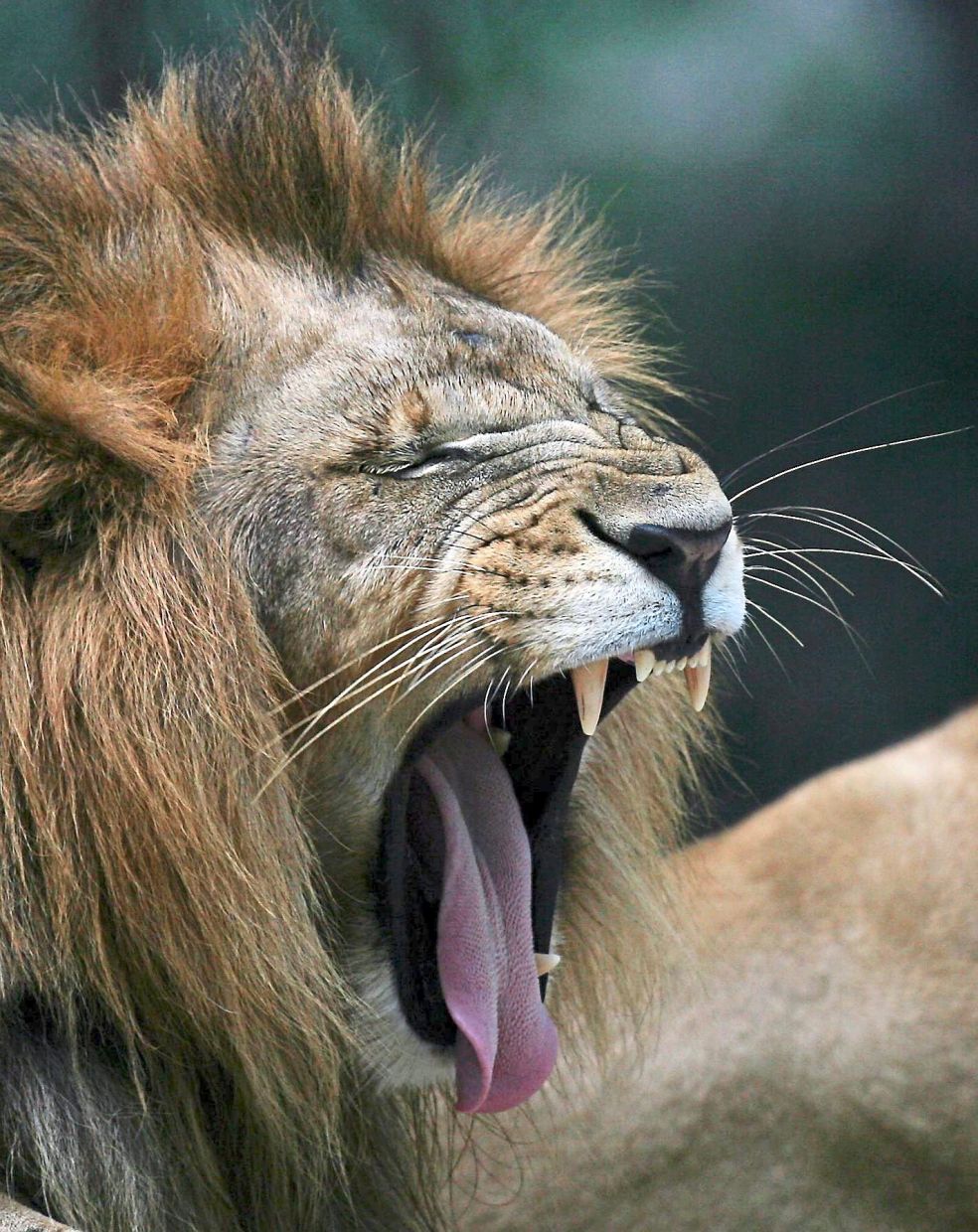 Animals with longer yawns have larger brains and more intelligence like the lion seen here. — Filepic

Seeing, hearing or thinking about yawning can trigger a yawn, but there is little understanding of why this happens.

Some evidence suggests that yawning is a means of communicating changing environmental or internal body conditions to others.

Check it out yourself: keep your attention on someone yawning and see if you start yawning!

Another study, published in the journal Personality and Individual Differences, looked at 135 college students, their personalities, and how they reacted to different facial movements.

The results showed that the less empathy a person had, the less likely they would yawn after seeing someone else yawn.

Hence, if you’re catching a yawn from someone else, you have more empathy and bonding ability.

How much you yawn is also dependent on the climate you’re in.

Yawning is apparently influenced by ambient temperature (the actual temperature of air within an enclosed space).

If you’re working out in the hot sun or in a cold environment, you may stop yawning as the temperature increases or decreases beyond a certain degree.

In my years abroad, I don’t recall ever yawning outdoors in winter – the moment I open my mouth and the cool air enters, the first sensation I get is an unbearable sensitivity in my mercury-filled cavities.

So I kept my mouth closed tight and refrained from talking!

And if your yawns are long, hey, you could be smart!

According to a 2016 study published in the Biology Letters journal, the length of your yawn matches the weight of your brain, and therefore, how many neurons it has.

In the study, researchers observed humans, along with YouTube videos of 29 different yawning mammals, including mice, kittens, foxes and walruses.

They discovered a pattern: animals with smaller brains had fewer neurons in the cortex (outermost layer of the brain) and shorter yawns, than animals with larger brains.

Primates tended to yawn longer than non-primates and humans, and had the longest average yawn, lasting a little more than six seconds.

The yawns of tiny-brained mice, in contrast, were less than 1.5 seconds in duration.

So basically, the longer your yawns are, the more intelligent you are.

Although most reasons for yawning are no cause for concern, excessive yawning may be an indication of something more serious that warrants medical attention.

If you feel a yawn coming while your boss is talking, go ahead, don’t fight the urge, just let it out.

It’s not a sign of rudeness or disrespect (although do cover your mouth as a matter of courtesy).

On the contrary, it might make you more alert, present and engaged. Just keep the sound down, please.

How to walk the right way