A pesticide detector at your fingertips

The sensors on the glove are electrodes screen-printed on the index, middle and ring fingers using conductive carbon ink. — Photos: NATHALIA GOMES/USP

Scientists at the University of São Paulo (USP) in Brazil have created a wearable device to detect pesticide residues in foodstuffs.

The device consists of a synthetic rubber glove with sensors on three fingers.

The sensors are electrodes screen-printed on the index, middle and ring fingers using conductive carbon ink.

They detect carbendazim (a carbamate fungicide), diuron (a phenylamide herbicide), paraquat (a bipyridyl herbicide) and fenitrothion (an organophosphorus insecticide).

The presence of these substances can be detected by placing one gloved finger with a sensor in or on a sample at a time.

The device takes a minute or less to analyse the data via software running in a smartphone, according to chemist Paulo Augusto Raymundo-Pereira, who led the study.

Each finger of the glove detects a different pesticide class.

Detection is electrochemical and requires water.

“The water is necessary because we need an electrolyte [to conduct electric current by forming positively and negatively charged ions].

“A drop of water is sufficient to establish contact between the fruit or vegetable and the sensor.

“Detection occurs at the interface between the sensor and the solution,” says study co-author Nathalia Gomes. 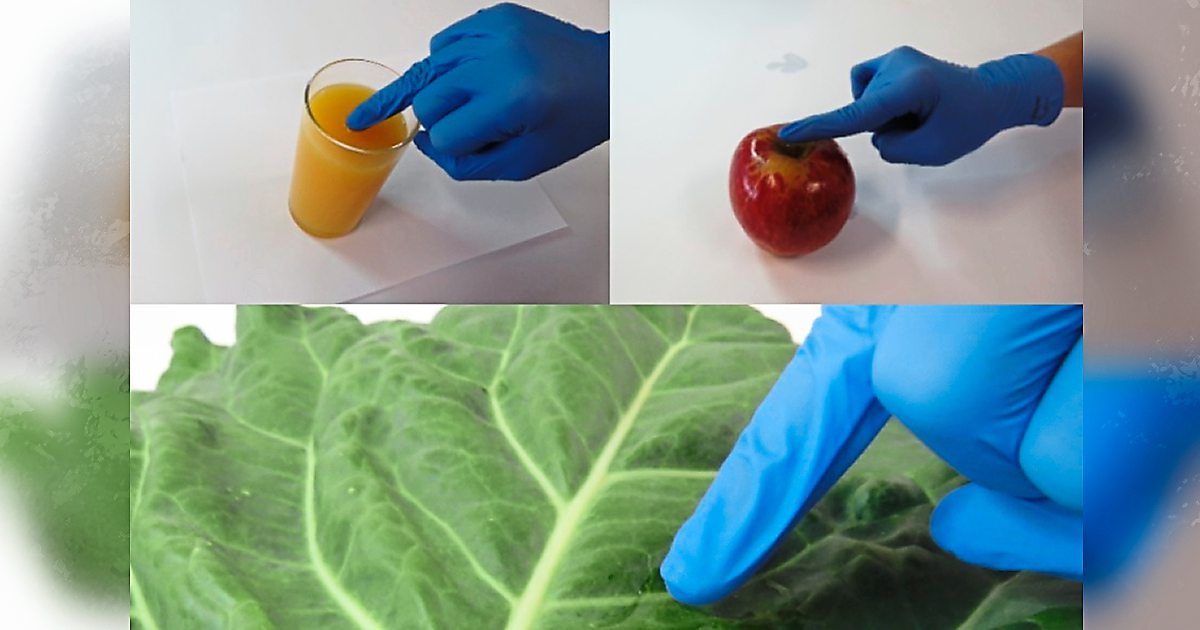 The presence of four types of pesticide residue can be detected within a minute by placing each sensor in or on a sample.

According to her fellow co-author Professor Sergio Antonio Spinola Machado, there is nothing similar on the market and the methods currently used to detect pesticides involve chromatography (separation of a mixture into its components), spectrophotometry (measurement of light absorption to determine the amount of a substance in a sample), electrophoresis (separation of molecules based on size and electrical charge) or laboratory assays.

“All these techniques are expensive, require skilled labour, and take a long time to produce results,” he says.

“Our sensors are an alternative to the conventional techniques, enabling fast, reliable and robust analysis in situ and at low cost.”

Raymundo-Pereira adds that: “One of the main novelties in this invention is selective detection in the presence of other groups of pesticides, such as triazines, glycine substitute, triazole, strobilurin and dinitroaniline.

“That isn’t possible with traditional methods.”

The device also enables direct detection without sample preparation, making the procedure faster and helping to conserve foodstuffs, which can be consumed after the analysis.

The glove has no expiration date and can be used indefinitely unless the sensors are damaged.

Study co-author Prof Osvaldo Novais de Oliveira Jr notes that the sensors can be damaged by organic solvents, such as alcohol or acetone, and by improper mechanical contact, e.g. rubbing a rough surface.

The cost is basically the same as the cost of the glove alone.

“The sensors cost less than a cent each. The glove is the main cost item,” explains Raymundo-Pereira.

“We use a nitrile rubber glove because it’s less porous than latex.

“The price has soared during the [Covid-19] pandemic, but the device is still very inexpensive and much more affordable than existing tests.”

A patent has been filed for the device.

The study was published in the Chemical Engineering Journal. – By Karina Ninni/Agência FAPESP

What you eat shows in your body and mind

Who says eating rice is unhealthy?

These six healthy herbs can add plenty to a meal