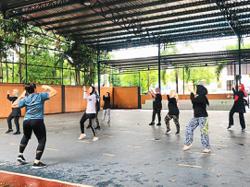 Tremors are one of the common symptoms of Parkinson’s disease. — 123rf.com

April is Parkinson’s Disease Awareness Month, which makes this a good time to learn more about this progressive nervous system disorder.

An estimated one million people in the United States and more than 10 million people worldwide are living with Parkinson’s disease, according to the American Parkinson Disease Association.

The signs and symptoms of Parkinson’s disease can be different for everyone.

Early signs can be mild and go unnoticed.

Symptoms often begin on one side of your body and usually remain worse on that side, even after symptoms begin to affect both sides.

It ordinarily begins in middle or later life, and the risk increases with age.

People usually develop the disease when they are 60 or older.

Having a close relative with Parkinson’s disease increases the chances that you’ll develop the disease.

However, your risks are still small, unless you have many relatives in your family with Parkinson’s disease.

Men are more likely to develop Parkinson’s disease than women.

Many Malaysians confident in their ability to age healthily

Physically-active persons can fight off Covid-19 more easily
When surgery means no coffee for the caffeine addict
Diets that could impact Covid-19 severity
Scientists create new substance that helps trap airborne viruses on surfaces
Covid-19 vaccines effective against the Delta variant
Novavax Covid-19 vaccine over 90% effective
Tips to safely reuse your N95 face mask
Swollen lymph nodes after Covid-19 vaccination could be mistaken for breast cancer
Is 10,000 daily steps really the magic number for better health?
Enlarging your breasts through surgery: What you need to know