The myth that commercial deodorant causes breast cancer is one of the most persistent untruths about this cancer. — Filepic

It’s a topic Dr Amy Patel spends a lot of time discussing in a never-ending quest to dispel the myths women believe about breast cancer.

The breast radiologist and medical director of Women’s Imaging at Liberty Hospital in Montana, United States, swats down misinformation like Wonder Woman deflecting incoming fire with her magic bracelets.

She recently championed new Missouri legislation that requires insurance companies to pay for more aggressive screening of younger women at high risk of the disease.

“Unfortunately, there’s so much inaccurate information out there in social media,” she says.

“As much as I’m a huge advocate of social (media), there’s just so much fake news (and) alternative facts out there regarding breast health and mammography, and breast cancer.

“So if I can get out there and try to debunk those stereotypes and those myths, I try to take those opportunities when I can.”

There are three myths in particular she constantly hears from patients and answers here:

Women who experience pain in their breasts sometimes take that as a sign of cancer, according to Dr Patel.

“But very few studies show a correlation between breast pain and cancer,” she says.

“Typically, breast cancer, whether you’re a man or woman, is painless.

“And typically, if you have breast pain associated with breast cancer, it’s a more pronounced, more advanced cancer where you start to see maybe skin changes and redness of the breast.”

She adds: “Typically, breast pain is hormone-related ... in premenopausal women and not associated with breast cancer.

“So that’s one myth we try to debunk.

“And then deodorant’s a big one.”

“A lot of times I’ll have patients who say they make their own organic deodorant,” says Dr Patel.

“And I say, ‘Well, you should save your time and money because there’s no scientific evidence that shows that commercial deodorant causes breast cancer.’

“I always tell my patients at speaking engagements, ‘I use Secret deodorant. It’s OK if you feel guilty that you have to buy your deodorant rather than make it, because it’s really not going to help you in terms of ... carcinogens or anything like that.’”

On the other hand, women sometimes skip mammograms and say no to biopsies because no one in their family has had breast cancer and they don’t see a need.

“So I try to tell patients that actually, the majority of women who get breast cancer have no family history, so it’s really important to get that mammogram every year,” she says.

Current guidelines from the American Cancer Society say women at average risk of breast cancer should begin yearly mammograms by age 45 – it used to be 40 – and can transition to every other year beginning at age 55, if they wish.

Missouri’s new law, which Dr Patel worked on and went into effect on Aug 28 (2020), requires insurance companies to cover screenings for women ages 25 to 29 if they are at higher risk, as well as screenings every six months from age 30. – By Lisa Gutierrez/The Kansas City Star/Tribune News Service

This common growth in the uterus is usually harmless

Having severe pain during your period is not normal 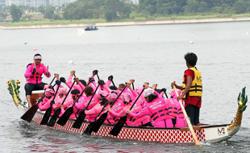