How the benign bacteria in our bodies affects our health

Different levels of certain bacteria in the gut is associated with the development of certain diseases like obesity, cardiovascular disease and IBD, among others. — Positive Parenting

Recent estimates suggest that the ratio of human cells to bacteria is approximately one to one.

That means that we are about as much bacteria as we are human!

The genome of each bacterial strain alone contains thousands of genes.

These estimates don’t even account for fungi, viruses and other microorganisms in the body.

Technological improvements have facilitated the growth of research into the human microbiome, and the rapid expansion of knowledge over the past few years has helped reinforce our knowledge and appreciation of the microbiome and health.

In fact, it has been suggested that the microbiome is actually a key modulator of human health, to the extent that it could be regarded as an essential “organ” of the human body.

This is as research has observed distinct changes to the human microbiome composition when patients develop various diseases – a state known as dysbiosis.

However, determining a definitive composition of a “healthy” microbiome has been difficult, especially as the trillions of microbes in the human body are evolving continuously.

Here are nine diseases that have been observed to be impacted by the human microbiome:

This chronic and systemic disease characterised by the accumulation of fat in the body, has increased worldwide in the last 40 years.

It is defined as a body mass index (BMI) of 27.5 or more for Asian adults, and above the 95th percentile of weight for the respective age groups and gender among youths.

Growing evidence from human studies indicate that gut bacteria plays a key role in the development of obesity, with the interactions between the gut microbiome, diet and host genotype being the key focus of research.

Food intervention has been found to be effective in modulating our gut microbial composition to treat obesity.

For example, oolong tea contains a polyphenol that effectively increases the Bacteroidetes phylum of bacteria, while decreasing other types that don’t contribute to a healthy gut microbial composition.

Bariatric surgery, which itself influences the composition of the gut microbiome, is a popular treatment for morbid obesity.

The changes in gut microbiome composition vary depending on the type of bariatric surgery performed.

A gastric bypass can lead to an increase in the Proteobacteria phylum of bacteria and a decrease in the Firmicutes phylum.

Meanwhile, a laparoscopic sleeve gastrectomy causes the anti-inflammatory Faecalibacterium prausnitzii bacteria (a member of the Firmicutes phylum) to increase.

However, more investigation needs to be done to identify the specific bacteria involved in post-bariatric surgery weight loss.

A state of dysbiosis in gut microbiome has been observed in both animals and humans who have been found to have hypertension (high blood pressure).

Recent studies have employed the use of faecal microbiome transplants, where faeces with healthy bacteria are transplanted into the gastrointestinal tract of a patient, to examine the relationship between the gut microbiome and blood pressure regulation.

This demonstrates the potential ability of a good microbiome composition in regulating blood pressure.

Cardiovascular disease remains a major cause of death and disability worldwide, and will only continue to grow further.

The potential role of the gut microbiome in improving the state of metabolic diseases like cardiovascular disease, has been the focus of recent studies.

In a metabolomic study of specific indole and phenyl-derived metabolites originating solely or partly from gut microbes, it was concluded that specific microbe-derived metabolic signatures are associated with advanced human atherosclerosis and postoperative cardiac complications.

Another study found that a Western diet significantly reduced the amount of Akkermansia muciniphila, which otherwise helped decrease atherosclerotic lesions, in mice genetically engineered not to have any gut bacteria. 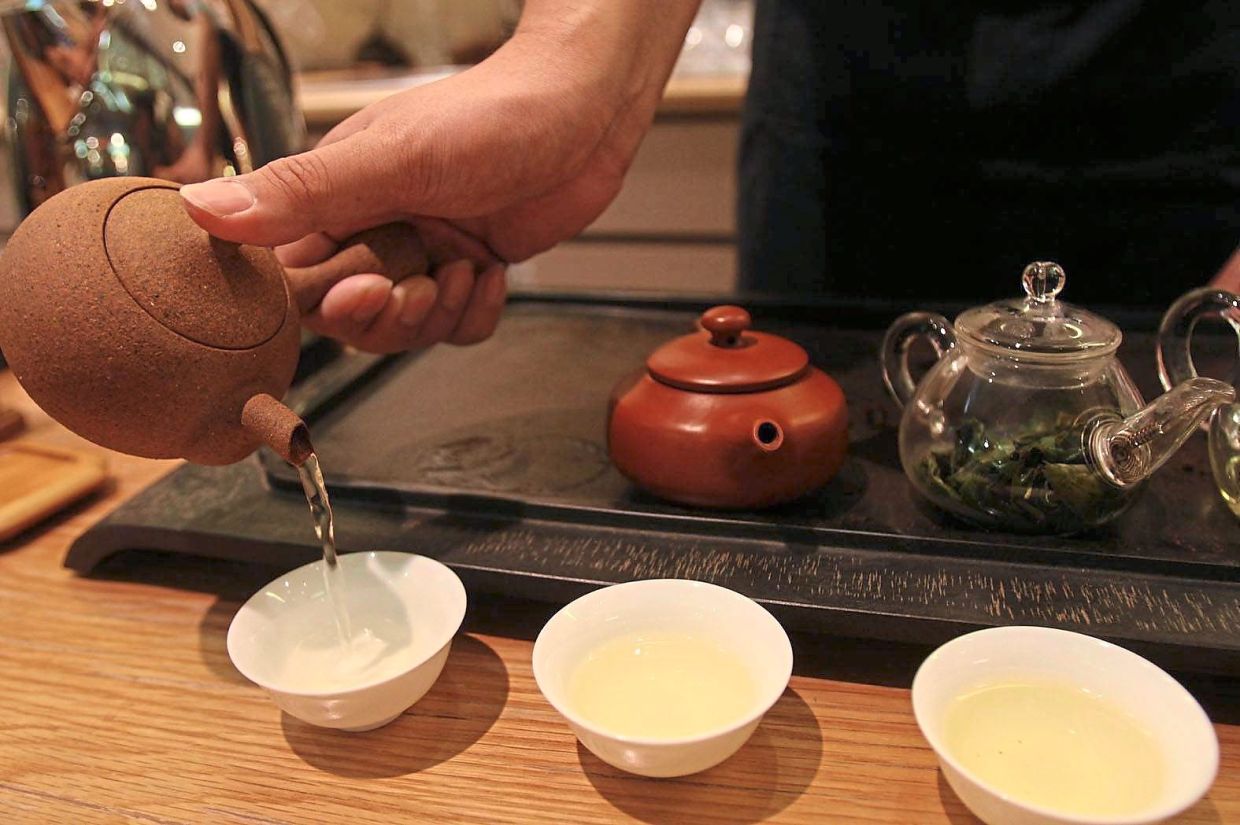 Oolong tea, as seen in this filepic, is able to help keep undesirable bacteria in check.

The World Health Organization (WHO) estimates that diabetes will increase to affect 592 million people by 2035, making it the third most widespread disease after cancer and cardiovascular disease.

The gut microbiome has been suggested to play a role in the development of type 1 diabetes mellitus, possibly through its role in regulating immune response.

An altered gut microbiome composition characterised by reduced amounts of Clostridium spp and A. muciniphila has been observed in pre-diabetic individuals.

However, it is likely that the development of type 1 diabetes is regulated by interactions between specific individual members of the gut microbiome, rather than the overall balance of the microbiome.

In patients with type 2 diabetes mellitus, the amount of F. prausnitzii was found to be significantly lower than in healthy individuals.

Metformin has been shown to regulate gut microbiome composition and faecal transplants of metformin-treated patients to germ-free mice improved glucose tolerance in the mice.

As the understanding of the role the microbiome plays in the progression of cancer improves, the potential of microbiome-based therapeutics in the management of cancer is increasingly being researched.

IBD is often associated with a state of dysbiosis, accompanied by a shift towards elevated levels of microbes capable of coping with oxidative stress.

There is a notable increase in facultative anaerobic bacteria, which are bacteria that can live with or without oxygen, possibly because certain strains have evolved to thrive in an IBD gut environment through mechanisms of oxidative stress response.

The use of antibiotics during pregnancy, but not during infancy, is positively associated with an increased risk of developing very early onset IBD.

This may be attributed to changes in the gut microbiome.

The Lactobacillus gasseri SF1138 probiotic strain has shown anti-inflammatory effects in mice with colitis and is able to help maintain gut barrier integrity, suggesting that it can help protect against the progression of inflammatory intestinal diseases. The bacteria F. nucleatum plays an important role in the lowering of colorectal cancer risk by eating a diet rich with whole grains and fibre. — TNSGout can be genetic or acquired, with severe joint pain caused by too much uric acid in the body.

The gut microbiome of gout patients have been shown to lack proper regulation, compared to healthy individuals.

Bacteroides caccase and B. xylanisolvens were also found in higher amounts in gout patients, whereas F. prausnitzii and Bifidobacterium pseudocatenulatum were found in lower amounts.

The gut microbiome has even been increasingly implicated in various neuropsychiatric disorders, with particularly strong evidence for its role in depression.

Researchers have been exploring the potential and efficacy of probiotics in helping patients diagnosed with psychiatric illnesses.

However, most studies to date on this topic have focused on healthy individuals, rather than those with MDD.

A more recent review concluded that probiotics have a negligible effect on overall mood.

The contradicting results emphasise the need for properly designed studies with a greater sample of clinically-depressed patients.

Rheumatoid arthritis (RA) is a chronic inflammatory joint disease that results in bone and cartilage damage, eventually leading to disability if not addressed properly.

Its root cause remains unknown, but the gut microbiome has been suggested to play a role in its development.

Gut and oral microbiome dysbiosis have been observed in RA patients, with the changes significant enough to distinguish RA patients from healthy individuals.

Haemophilus spp were found in lowered amounts and were negatively associated with serum auto-antibody levels in patients.

On the other hand, the level of Lactobacillus salivarius was found to be raised.

Probiotics display a potentially therapeutic effect in the treatment of RA by significantly reducing the level of pro-inflammatory IL-6 cytokines, but the actual outcome in treating RA is still unknown.

It is important to note that the microorganisms that co-exist in our gut are enormous in number and highly complex.

Thus, eating a healthy, balanced and wholesome diet rich in vegetables, fruits, whole grains, nuts, seeds and proteins, is important not just for gut health, but also our overall health.

Balancing your immune system to help fight off Covid-19

Keeping yourself in the green of health
Back pain can be caused by many conditions Premium
Avoid food poisoning: Keep those leftovers safe to eat
Will we have a twindemic of Covid-19 and influenza?
Reassuring our students that we've got this
Covid-19 research: How to tell if it's fact or fiction
Frontliners in the US traumatised by constant abuse
A fall in the elderly can be the start of deteriorating health Premium
Here are three myths about the Covid-19 booster shot
Covid-19 booster shots are needed to maintain the appropriate level of protection