Welcome back to The Butcher's Table, Mr Ho

(Far left) For a special holiday treat, pre-order the English roast pork shoulder loin with crackling and expect to form an instant attachment.(Left) With hints of smokiness, the smoked pork knuckle is delicious from start to finish.

For many Kuala Lumpur residents who enjoy the porkier side of life, Mr Ho’s Fine Foods in Bangsar Shopping Centre (BSC) was a permanent fixture in the late 1990s and early 2000s, serving up premium sausages and to-die-for roast pork that had a constant throng of fans.

The business grew so much, it included outlets in other locations. When Ho Kim Loon, a trained butcher and owner of Mr Ho’s, closed his shop in 2009, his absence left a hole in the market. He spent the next few years in East Malaysia, in Kuching and then Kota Kinabalu, before a couple of F&B bigwigs persuaded him to return.

“I was away for a long time, so I lost touch with the market a bit. I came back on and off, and realised that the food quality had declined over the years. And my friends in F&B knew my work, so they said, ‘Why not come home and give the market a comeback?’” he says.

So after a decade-long hiatus, Mr Ho is back in business – with a new eatery called The Butcher’s Table in a new location: SS2 in Petaling Jaya, Selangor.

Though he could have leveraged off his previous moniker and called the new eatery Mr Ho’s again, Ho decided to eschew his previous identity in favour of something modern. “I think now a lot of concepts in the market are very contemporary, so we thought of giving it a new brand,” he says. 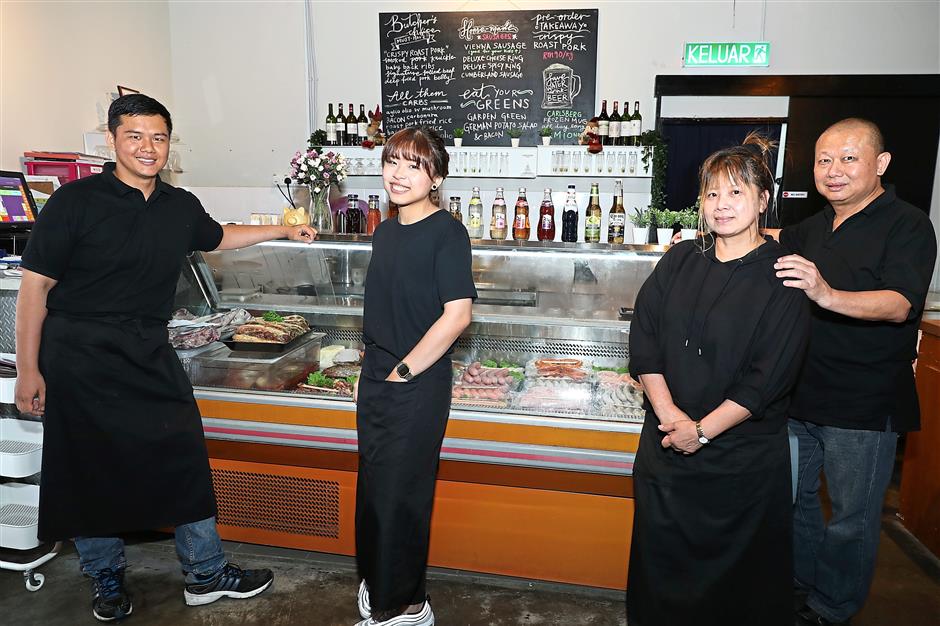 The Butcher’s Table is now a family business. Ho Kim Loon (right, with his wife Melinda) says he hopes his kids, Kent (left) and Tiffany, will one day take over from him.

The other thing that’s different about The Butcher’s Table? Ho’s entire family is helping him run the business.

Previously, his wife Melinda was the only other family by his side. But this time, his two children Tiffany and Sze Kent are onboard, too.

Tiffany actually gave up her job in Singapore when business picked up at The Butcher’s Table. Meanwhile, Kent was running a home-based business in Penang selling nasi ulam (a family recipe) but packed his bags and came to KL to help his father as well.

Kent says he and his sister literally grew up in the shop. “We always hung out at BSC and ate roast pork and sausages every day! For us, it’s not very hard to get back into this business, because we’ve been doing this since we were young and we have the product knowledge,” he says. 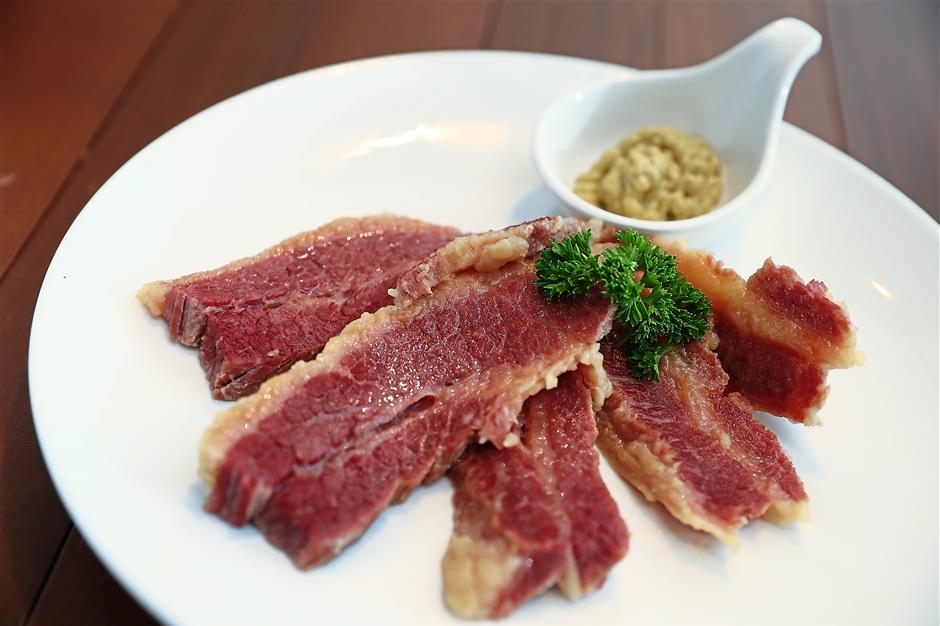 Inspired by Ho's trip to Selfridges in London, the salted beef is done to perfection.

Drawing on Ho’s experience and his knowledge of what customers like, the menu at The Butcher’s Table serves many of the popular offerings at Mr Ho’s, including the famed crispy roast pork (RM12), signature salted beef (RM34) and gourmet sausages (assorted prices).

The roast pork is still delicious, with golden brown crackling, crispy with a succulent layer of fat gilding its crusty exterior. The meat beneath is tender and juicy, brimming with flavour.

Ho says making sure the roast pork is perfect entails checking the oven temperature constantly. Interestingly, the oven took up half his set-up cost! “We use local pork belly, marinate it, and cook it for over an hour in the oven. We just change the temperature from stage to stage,” he says. 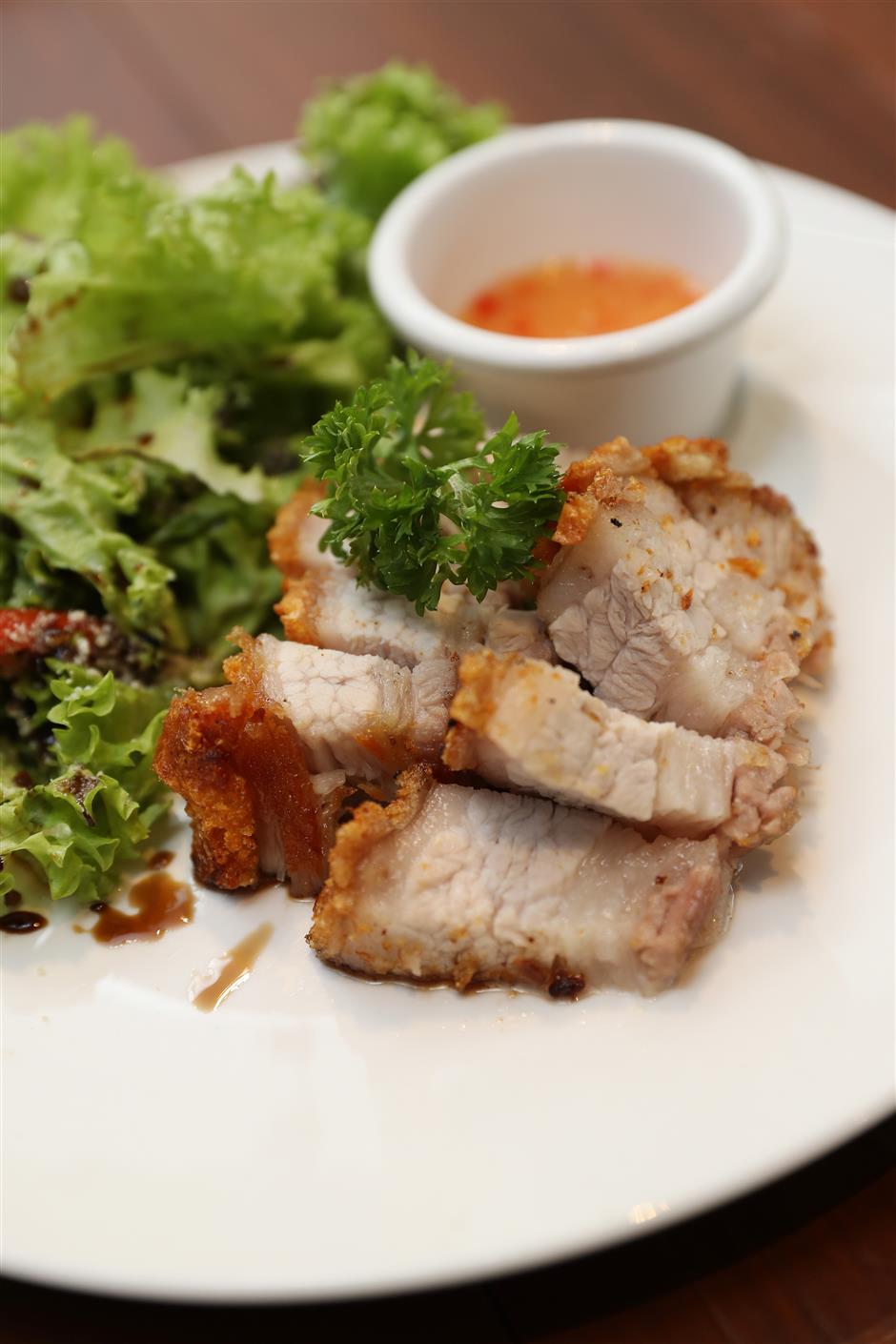 The roast pork is as good as ever, and features crispy skin mounted atop juicy, tender meat. 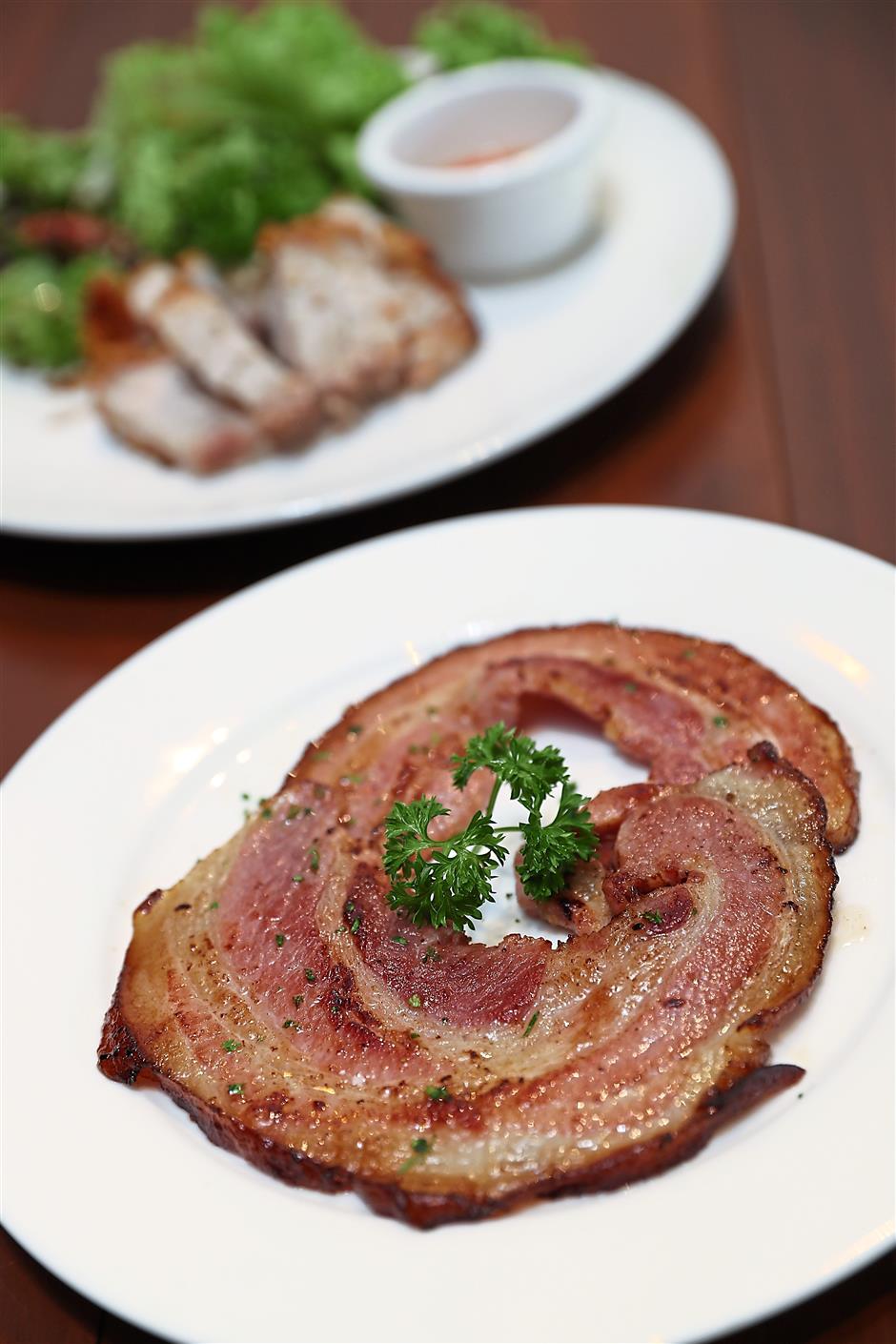 The house-made grilled pancetta is perfectly salted and utterly delicious.

Then there is the signature salted beef, which Ho says was inspired to make after a trip to Selfridges in London 20 years ago. At Selfridges, he noticed a queue forming for the outlet’s ox tongue and beef brisket. After trying it himself, he realised this was something he could do himself.

Two decades later, he’s still at it. His salted beef is pure, unadulterated bliss – the fat is meltingly tender, almost like butter, with meat that yields easily at the slightest provocation. Ho says the secret is in the curing process, which takes eight to 10 days, after which the meat is cooked for three to four hours at a low temperature to get the requisite tenderness.

In line with the current zeitgeist for healthy food, Ho has also strived to reduce the salt content of his meats at the eatery, and all his sausages will soon be nitrate-free. Ho’s sausages are made using 80% lean meat and 20% fat, which he says is the perfect meat-to-fat ratio.

He is also fastidious about freshness, so the sausages in the display case are disposed of if they are not sold within three days, which means you’ll never get an old sausage on your plate.

From the sausage selection, the deluxe cheese ring (RM25) is by far the most popular offering – every bite features delicious melted cheddar cheese that pops in the mouth, creating an amalgamation of creamy, cheesy, porky flavours that cumulatively create an unforgettable gourmet experience. 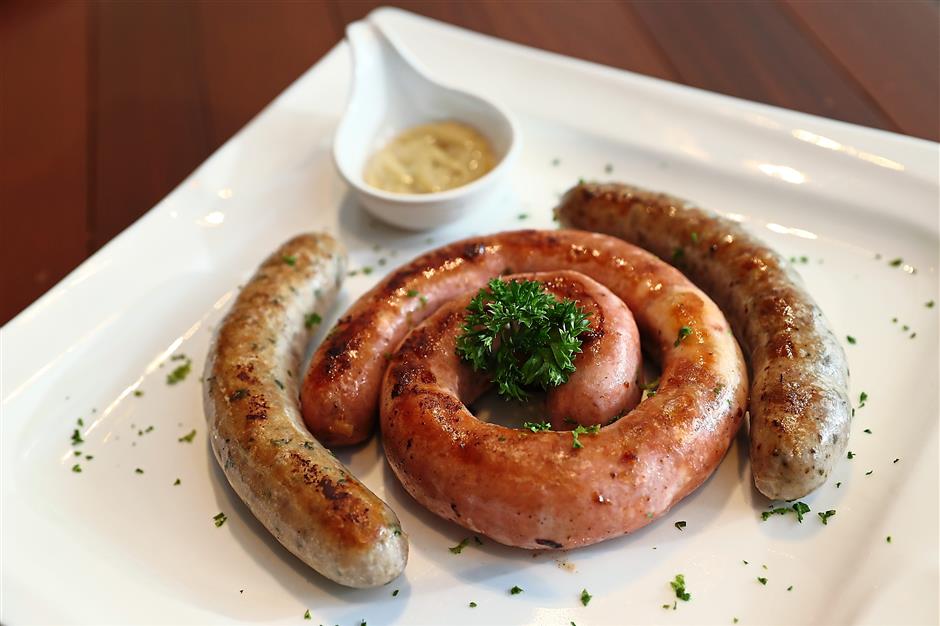 Ho still makes the sausages himself, ensuring that the meat-to-fat ratio and water content are accurate. From left: farmers bratwurst, cheese ring and Cumberland. 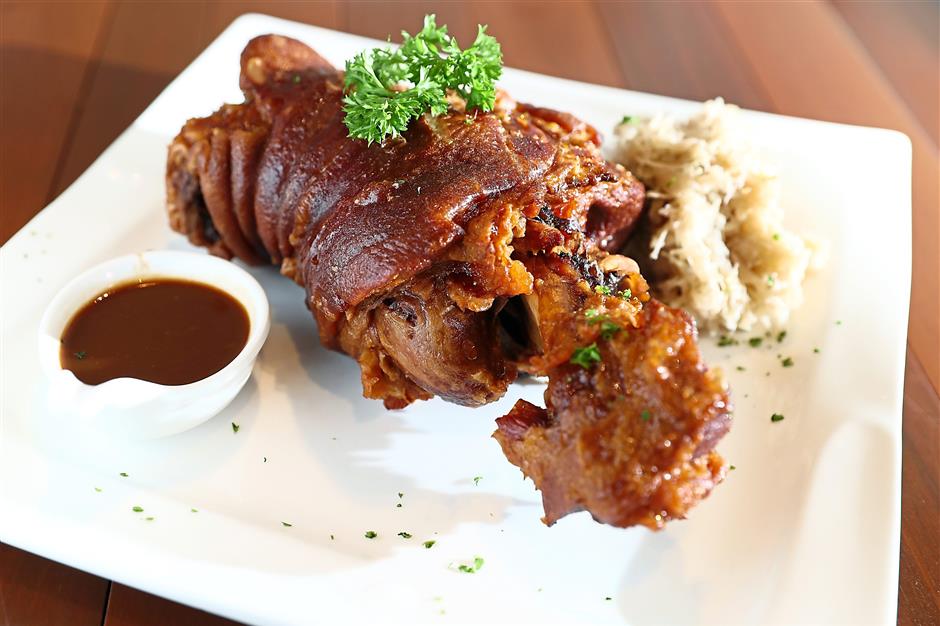 With hints of smokiness, the smoked pork knuckle is delicious from start to finish.

If you want to try a different part of the pig, have a stab at the smoked pork knuckle (RM65), which is smoked using natural wood chips. The meat is rich and soft, with smoky undertones that have an addictive lure.

Then there is the grilled pancetta (RM12) or Italian bacon, which is made in-house – another star offering from the eatery’s porcine laden offerings. The bacon is well-salted, with smoky notes and a good amount of fat.

This Christmas, The Butcher’s Table is offering a couple of items for takeaway (pre-orders are necessary), including the English roast pork shoulder loin with crackling (RM120 per kg).

This is the sort of porcine addition that is guaranteed to give your meal a festive lift. The meat is tender and well-seasoned and the crackling is so good, you won’t be able to keep your hands off it!

Ho says business has been good since he opened, and the restaurant is so busy over the weekends that wait times of 30 minutes or more are commonplace. Which makes you wonder how much longer the 50-something Ho can carry on doing this, given the long hours and amount of work involved.

He says his dream is to ultimately hand over the business to his kids, as long as they are passionate about it.

“Hopefully, in the near future, I can train someone. Of course, priority will be given to my kids. But at the end of the day, it depends on whether they have the passion to do this or not,” he says. “Because nowadays, recipes are nothing – you can just Google and find recipes. But the process of doing what I do? I think for that you need passion.”

Welcome back to The Butcher's Table , Mr Ho