A coffee company shows diners how to pair their end-of-the-meal items.

GIVEN the popularity of coffee culture in Malaysia, it should come as no surprise that there are now coffee-food pairings.

Leading the group through the coffees’ notes was Mike Yung, a Vancouver native who founded his own coffee consultancy in 2009 before joining PCC as a coffee ambassador in 2012.

Among some of the coffee appreciation tips Yung imparted was the difference in flavours and notes for the same cup of coffee, at different temperatures.

“Coffee is professionally tasted at 70°C and 40°C, and as it cools, the roast flavours disappear and the coffee’s acidity becomes more noticeable,” said Yung.

The choice of desserts for the pairing was done by PCC’s central kitchen chef Ng Yoke Mun, who brought 21 years’ professional kitchen experience into making the desserts.

But back to the tasting itself, the first pairing was PCC’s Sumatra blend, with a light body and low acidity, yet still holding a complex aroma which ranges from floral/fruity to some earthy notes.

The tiramisu’s blandly-sweet taste plays well against the Sumateran coffee, where aside from the requisite ingredients like mascarpone and coffee-soaked ladyfingers, Ng also added a layer of walnuts for more bite and texture.

We then had the American Baked Cheesecake, with the light-medium bodied Costa Rican blend.

The coffee, with its light to medium body, and higher acidity (compared to the Sumatran) has a strong sweetish taste, which when compared to the strong lemon flavour of the cake, helps complement each other.

Ethiopian Mocha differed from the earlier two beans, which underwent washing, as it is dry-processed instead.

This older method of processing results in a medium to heavy body, surprisingly very low acidity, yet with a riot of notes ranging from leather, pronounced earthiness and hints of fruit here and there.

Paired with the blueberry cheesecake, the dessert’s topping also complements the coffee’s complexity.

Chef Ng said the company’s central kitchen was working on more desserts to pair with PCC’s coffee blends, with some savoury concepts in the pipeline. 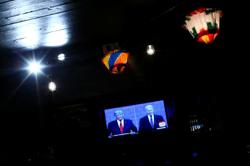