The enterprising Bibiaminani stresses the importance of always having an attitude of learning. Photo: Bibiaminani Abdul Ghani

Bibiaminani Abdul Ghani, a sole breadwinner and single mother to two children, says that her inspiration to start her own small home business comes from her life experience.

The owner of Pes Kak Bi, a home-based business which supplies various types of food paste to distributors and selected brands as well as end users, admits that being a single mother comes with a lot of struggles and emotional challenges.

“I’ve been a single mum for many years. It’s through these challenging times that I came up with the idea of making life easier, especially for women in terms of cooking because I’ve personally gone through those difficulties myself – being busy looking after kids and not having enough time. That’s why I started my business,” she says.

“And it was the love for my children and the need for survival that motivated me to persevere and keep on going whenever I felt like giving up,” says Bibiaminani who was runner-up in the recent Resipi Berani Maggi reality TV series, which is part of the Program Mentor Wanita Cukup Berani Maggi campaign.

The 49-year-old who lives in Ara Damansara, Petaling Jaya, reveals that she had faced multiple failed business attempts before. But she took it in good stride and did not let it deter her from trying again. Instead. Bibiaminani took it as motivation to improve her entrepreneurial skills and to try something new. 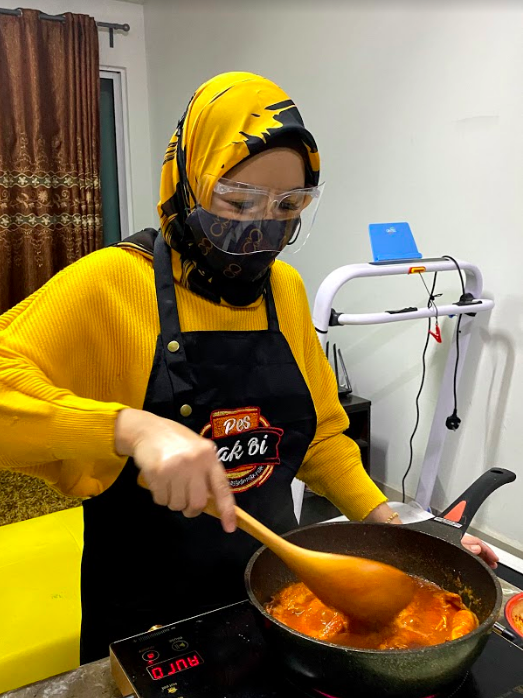 The enterprising single mother started her home-based food paste business with a capital of RM50. Photo: Bibiaminani Abdul Ghani“I decided to make asam pedas paste, following my mother’s recipe which has received positive feedback from my customers. From there, I started focusing on developing food paste, and I now have 10 different variants, including ungkep, rendang, asam pedas Johor, sambal serbaguna, lemak cili padi and others.

The enterprising woman signed up for the mentorship programme to learn new marketing and entrepreneurial skills to grow her business.

Since then, she has expanded her business and now has four distribution agents in her network.

Bibiaminani says that as a single mother, she had to learn how to rely on herself and be independent.

For some time, Bibiaminani was juggling two things simultaneously.

“I was still working full time at Telekom Malaysia while running my business. Furthermore, I had to handle everything single-handedly,” she says.

“I’ve had to go to the market to get raw ingredients and carry everything myself.

"At that time, I told myself – don’t think so much, just do it. And I loaded everything onto a trolley and brought it up to my flat,” she adds. “When the gas runs out or the stove breaks down, I’ve often had to find ways to fix it myself.”

The determined Bibiaminani says that she is currently learning ways to extend the shelf life of her products without using preservatives. “The reason I need this is because I’m looking at marketing throughout Peninsula Malaysia, and not just the Klang Valley. Eventually, I hope to market to East Malaysia too, so it needs to be long-lasting in order to be sent throughout Malaysia,” says Bibiaminani.

Like many other small to medium home-based entrepreneurs, Bibiaminani says that her business was impacted during the pandemic, mainly in the area of logistics.

“I have to send my food paste to customers throughout Peninsula Malaysia, so due to the MCO restrictions, delivering out of the district or state was difficult. There were delays faced by the courier company when borders were closed so by the time the food paste reached the customer, it was already ‘rosak (spoilt)’,” she says.

“That’s why I need to invest in the (retorting) technology to make the food paste long-lasting without preservatives. That’s very important and necessary,” she adds.

The enterprising woman reveals that her motto in life is “very simple”: “stop dreaming, start doing”.

“To all the women out there who dream of running their own business, don’t be afraid to start,” she says.

Bibiaminani believes that there is nothing wrong with starting small.

“It’s ok to start with what you have. Do a small amount first, then survey whether the market response is good, and grow from there,” she says.

But all this isn’t just talk to Bibiaminani because she actually started her business with only RM50.

“I had only RM50 to buy the ingredients, so I made only 20 packs of food paste to sell to my friends and also colleagues at the office. Then it grew from there as I reinvested my earnings into buying more ingredients for the next batch,” she shares.

She stresses the importance of always having an attitude of learning.

“Never stop learning. During the pandemic, there are so many courses online. So make full use of the opportunity to learn something new,” she concludes.

Italian village with the most 100-year-olds has science seeking clues
Banned from education, 'idle' Afghan girls are married off
British women 'more likely to die' around pregnancy than Norwegian, Danish
'Let's discuss my pay': How to get your dues as a woman
How parents can teach their child to be cybersmart
Empower women and children, Anwar
Starchild: Malaysian children love the colours of the rainbow
How to spot signs of your child being cyberbullied or trolled
Keeping Malaysian children safe from online predators, cyberbullies and trolls
Show the Red Card to call out violence against women