It all started several years ago when Dr Wong Mei Mei, 38, and her family returned to Malaysia from London, England, where she had been working as a scientist with the Imperial College London for 16 years.

“When we came back to Malaysia, I was still employed by the college, and I had to juggle working at home, mostly at odd hours due to the time difference, and having to care for my young children at the same time,” says Wong, who lives in Shah Alam with her husband, and their two children, aged six and three.

Wong naturally started looking for ways to keep her young children (at that time one and three-and-a-half years old) so that she could work more effectively.

“I spent time researching various play activities, in particular, sensory play based toys that are safe, natural and unique, and discovered that there was a huge gap in the market for such toys,” she recalls.

That was when Wong decided to make her own playdough for her children.

Wong’s main concern was the safety of store-bought playdough.

“I was always uncertain about the contents and safety of store-bought playdough. And I often ended up with sticky and unpleasant-smelling jars of playdough that would normally end up in the bin. 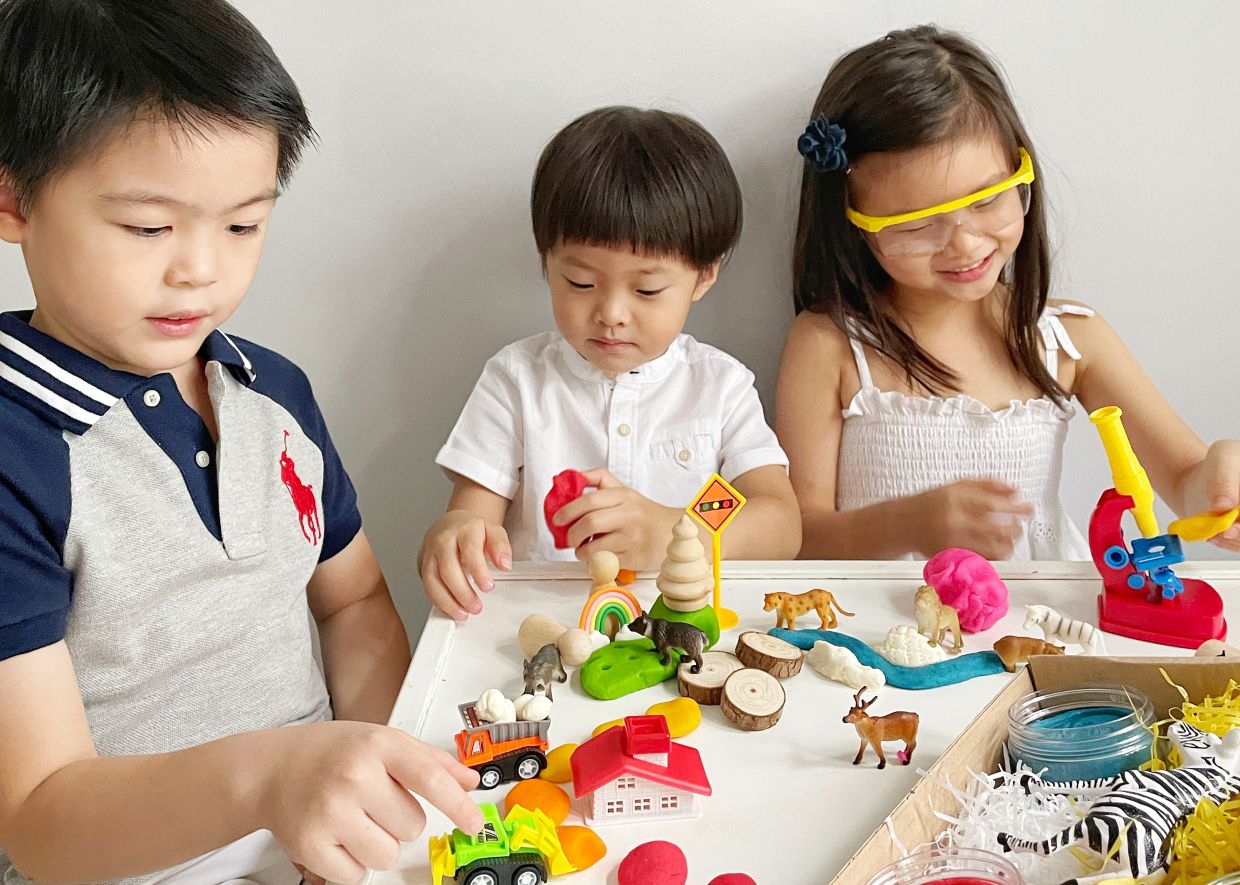 “So I researched what was out there, and decided to innovate and improve on it, making sure that it’s natural, kinder to young skin and safe for my children,” she adds.

Wong set out to find a way to create playdough made of 100% safe and edible food materials so that her young children could play together, without her worrying and having to constantly check what went into their mouths.

“I use only 100% high grade food materials in my playdough. Although it should not be treated as food, it’s technically edible, and safe for children as young as eight months to experiment and play with,” she says.

Wong created a variety of playdough kits for her children.

“I curated the playdough kits to have different themes and a variety of characters to encourage imagination, role play and communication in my children,” she says.

Wong found that her playdough kits and open-ended play concept were a huge hit with her children and helped tremendously in their fine motor skills, speech and cognition.

“They played with their kits at home and also everywhere we went, so it was always peaceful and quiet during meal times and our travels,” she says.

It didn’t take long for Wong’s playdough kits to catch on with her friends and their children, and a demand for them became apparent. 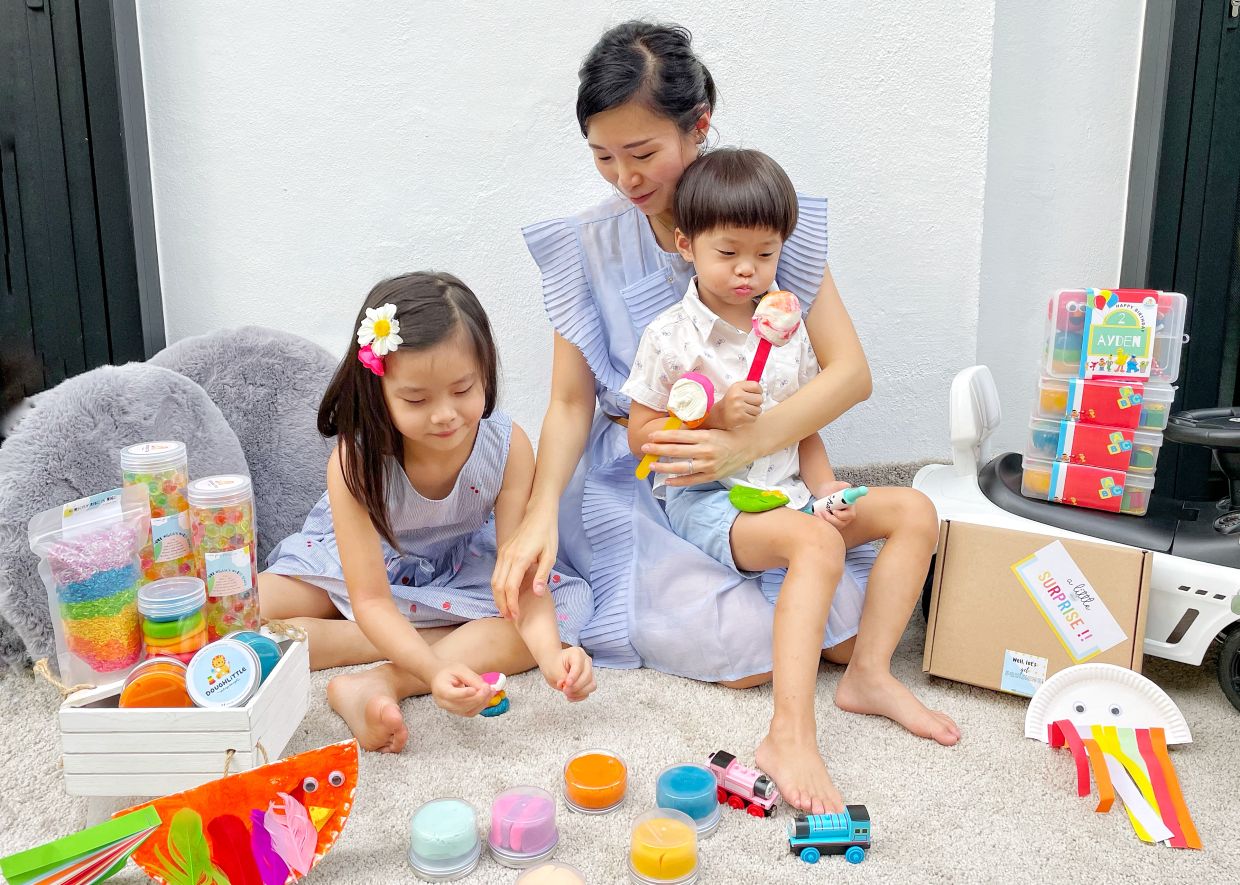 Dr Wong Mei Mei says that her children are the inspiration behind her playdough and they’re 'little ambassadors' for it. Photo: Dough Little Playdough

“Whenever we ate out as a family, I would always bring one or two playdough kits for the children. Somehow, they enjoyed their time playing, laughing, communicating, and would eat their food properly when their meal arrived,” she says.

“And whenever we went out with our friends and their children, it was always a struggle to get all the children, including mine, to sit down and not run everywhere in the restaurant.

“So, I decided to create more themes and bring more playdough kits so that all the children could sit down and play, then have their meal together properly,” she says.

Soon, her friends, and their friends, wanted to buy the playdough kits from her, and the word spread.

This led to the birth of Dough Little in Aug 2019. The playdough kits can be customised for special occasions such as children's birthdays. Photo: Dough Little PlaydoughWong says that her children are the inspiration behind her playdough and they’re “little ambassadors” for it.

“The name came about because they call it “Dough Little” and they love the soft, buttery texture and scent,” she explains.

“I hope that all my friends and all the kids in the country can play with Dough Little too, it’s so soft and squishy,” interjects her daughter Thea.

“It smells so good, I love to play with it, together with my fire trucks (his obsession),” adds her son Declan.

More than just a toy or something to keep her children occupied while she works, Wong says that the playdough kits have helped her children grow and excel.

“As a parent, I’m grateful to be able to create something that has played a role in my children’s growth. My daughter Thea developed really good fine motor skills from squishing and playing with the playdough, and was able to write at a very young age,” she says.

Wong reveals that as a child, she had always wanted to help others and make the world a better place, and she had aspired to become a doctor or a vet.

But she ended up taking a degree in Biochemistry at The University of Manchester in Britain, after completing her A-Levels at Taylor’s College in Malaysia. 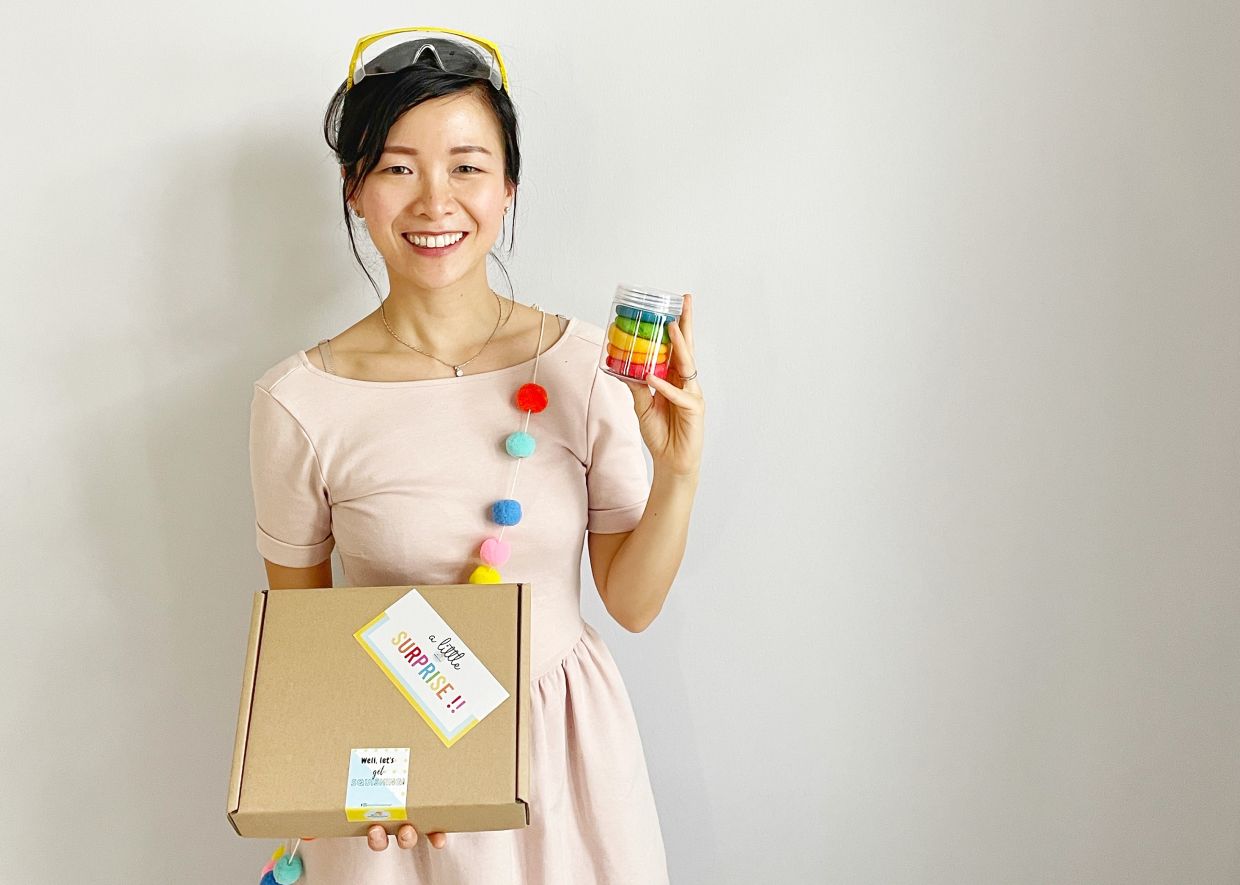 Transitioning from being a scientist to an entrepreneur wasn't easy but Wong says it's all about self-growth, going beyond her comfort zone, and challenging herself to do more in life. Photo: Dough Little Playdough

“During my undergraduate degree at Manchester, I went through a period of low self-esteem and suffered from a lack of self confidence. I was also bullied and labelled a ‘bimbo’ by a group of guy friends because I didn’t speak the language of cars and football too well,” she recalls.

“The turning point came when I decided that I had had enough because I wasn’t a bimbo and how I was treated just wasn’t right,” she says.

Because of this, Wong challenged herself to apply for a PhD in one of the top three universities in the United Kingdom.

Not only was she accepted into the Imperial College London to do a PhD in Stem Cell Biology, but she also won an award and a full scholarship to do so.

“I’ll always be grateful for that and this is something really close to my heart. That’s why I’ve always endeavored to raise my children the right way, to empower them with my words, and to say no to bullying and to look at a women’s worth with pride,” says Wong.

She admits that transitioning from being a scientist to an entrepreneur wasn’t easy.

“During my employment as a scientist, my day-to-day tasks included planning and executing experiments, managing other scientists, and publishing research papers. I knew nothing about generating sales, marketing or managing a business, let alone trying to grow it, so transitioning from being a scientist to a new entrepreneur was a really tough decision for me,” she reveals.

However, she says that it’s all about self-growth, going beyond her comfort zone, and challenging herself to do more in life.

“As an entrepreneur and the founder of my own playdough company, it’s more about getting my creative side out in designing, curating and finalising treasures for children. At the end of the day, it’s about making children (and their parents) happy and safe. It also involves marketing, being on social media, generating sales, managing orders and ensuring efficient logistics,” she adds.

“As a scientist, I had the opportunity to travel around the world to meet stakeholders of pharmaceutical companies and presenting my research to the public. These are aspects that I truly miss from my time as a scientist. But hopefully, I’ll be able to do this for Dough Little in the near future - through collaborations with other local and international brands, and spreading our joy to kids all over the world,” she aspires.

Each kit tells a story 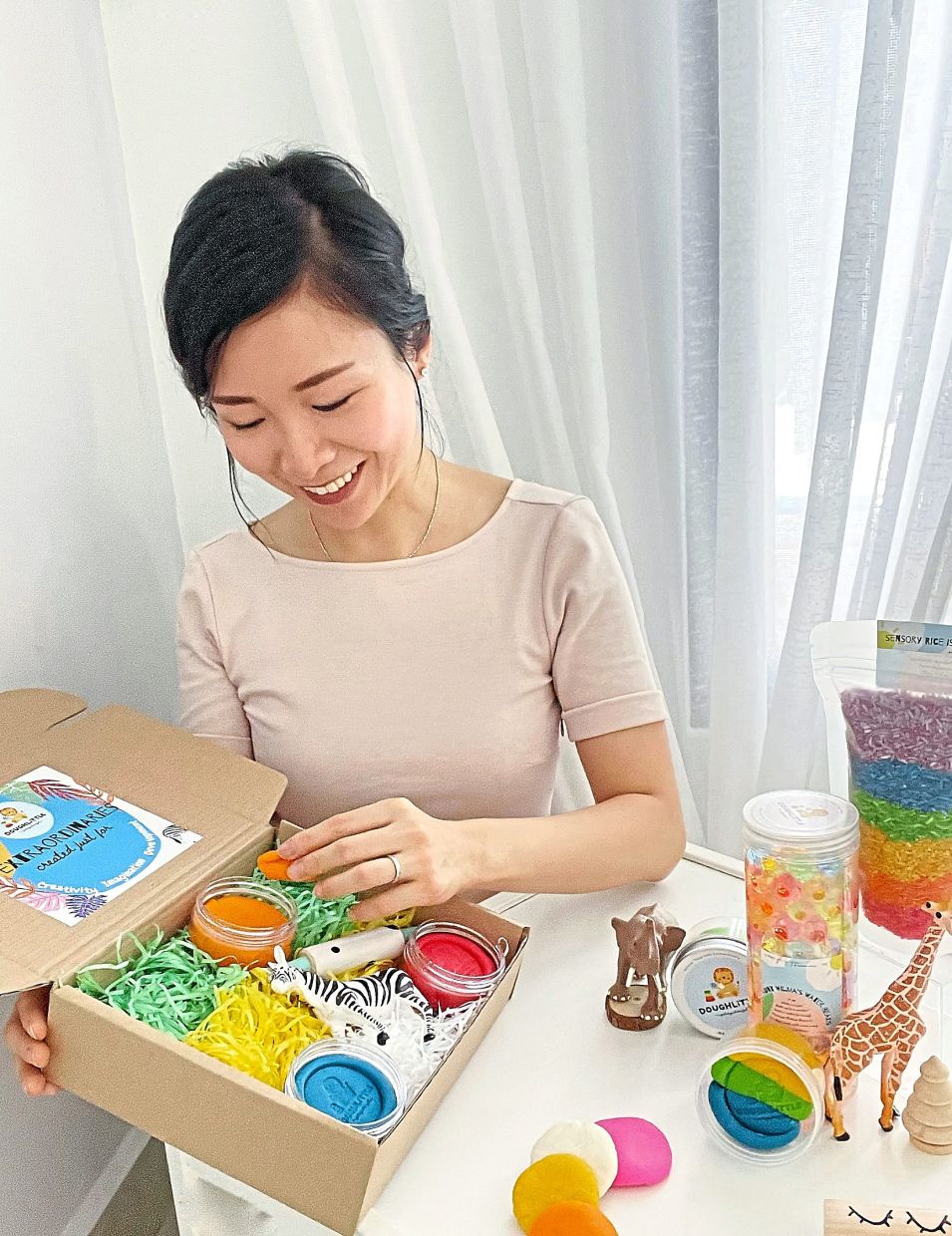 Wong has added her own personal touches, creativity and science elements to her playdough.

Most of their customers are concerned parents looking for safe, natural and unique sensory play materials for their children.

“During this pandemic time, parents have been looking for creative ways to keep their children occupied and entertained at home,” says Wong, adding that she infused various “life concepts” into the kits which children can learn from and relate to as they grow older.

Some of the themes include The Safari, Construction, Farmer & Fruit, Insects, Space, and Sports.

“Science concepts have also been incorporated through introducing elements of experimentation, sample creation and laboratory-themed kits,” she says.

There are also seasonal kits where children can learn more about the different festive seasons, such as Chinese New Year and Hari Raya themed kits which had toys and elements that encourage children to celebrate the season, learn about the culture, remember their grandparents (whom they wouldn’t have been able to visit during the pandemic), during their play time, she explains. 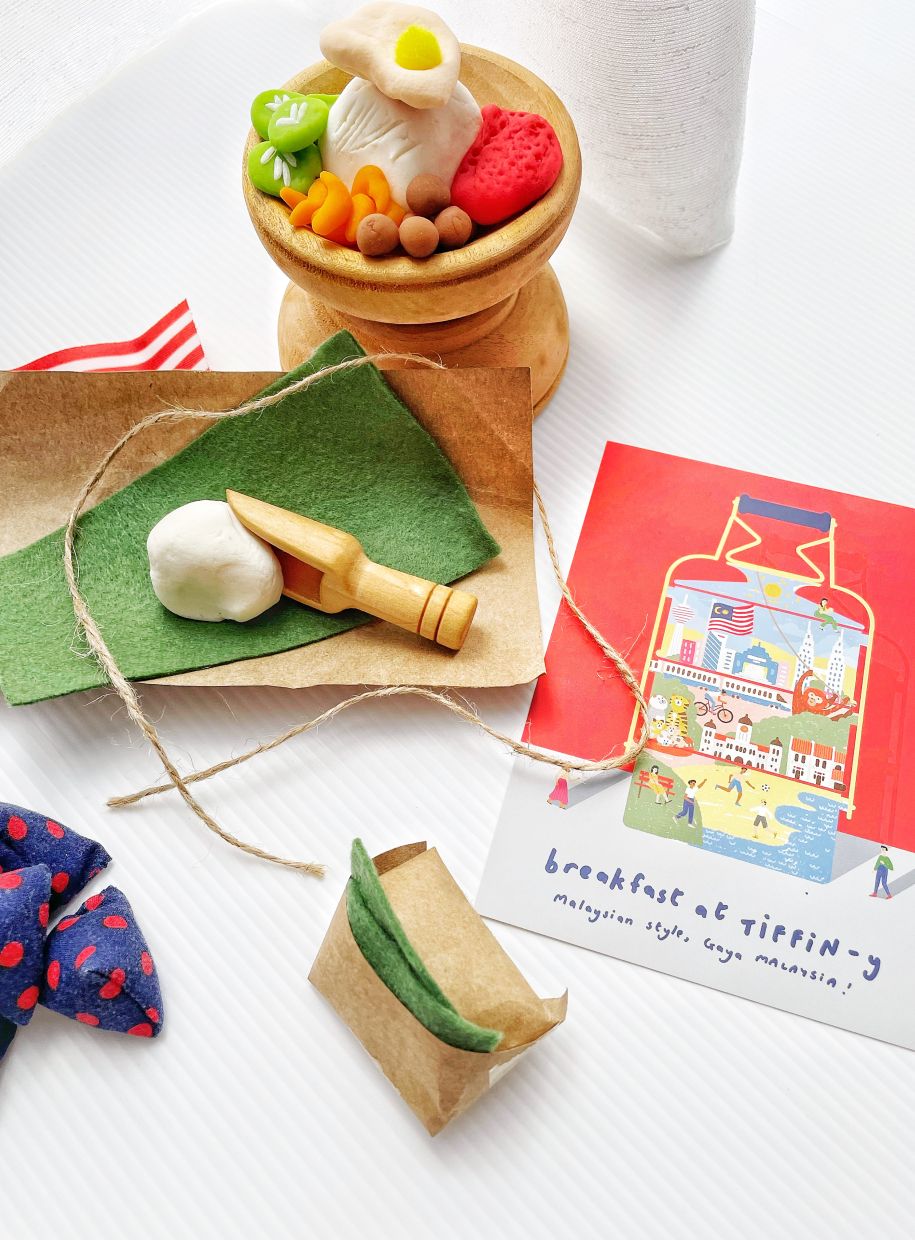 The Merdeka playdough kit celebrates Malaysia's national day and comprises Nasi Lemak bungkus (which the children can make using playdough), a postcard, and a traditional game called Batu Seremban. Photo: Dough Little PlaydoughOne of her most recent themed kits is the Merdeka set which includes playdough nasi lemak, a postcard for children to post to their friends whom they haven’t seen in awhile, and Batu Seremban, a traditional game they can play together with the whole family.

“It wasn’t an easy decision to transition and start my own business, but I wanted to spend more time with my children and to also create more playtime wonders for them,” says Wong.

“It also wasn’t easy to leave behind a successful career as a scientist which I had studied so hard for, including getting a PhD. It’s something that isn’t acceptable to many. But thankfully, my husband has always been supportive,” she says.

“My husband has been my strength since I started my business. He’s always encouraged me and been very supportive of me pursuing my dreams,” she concludes. 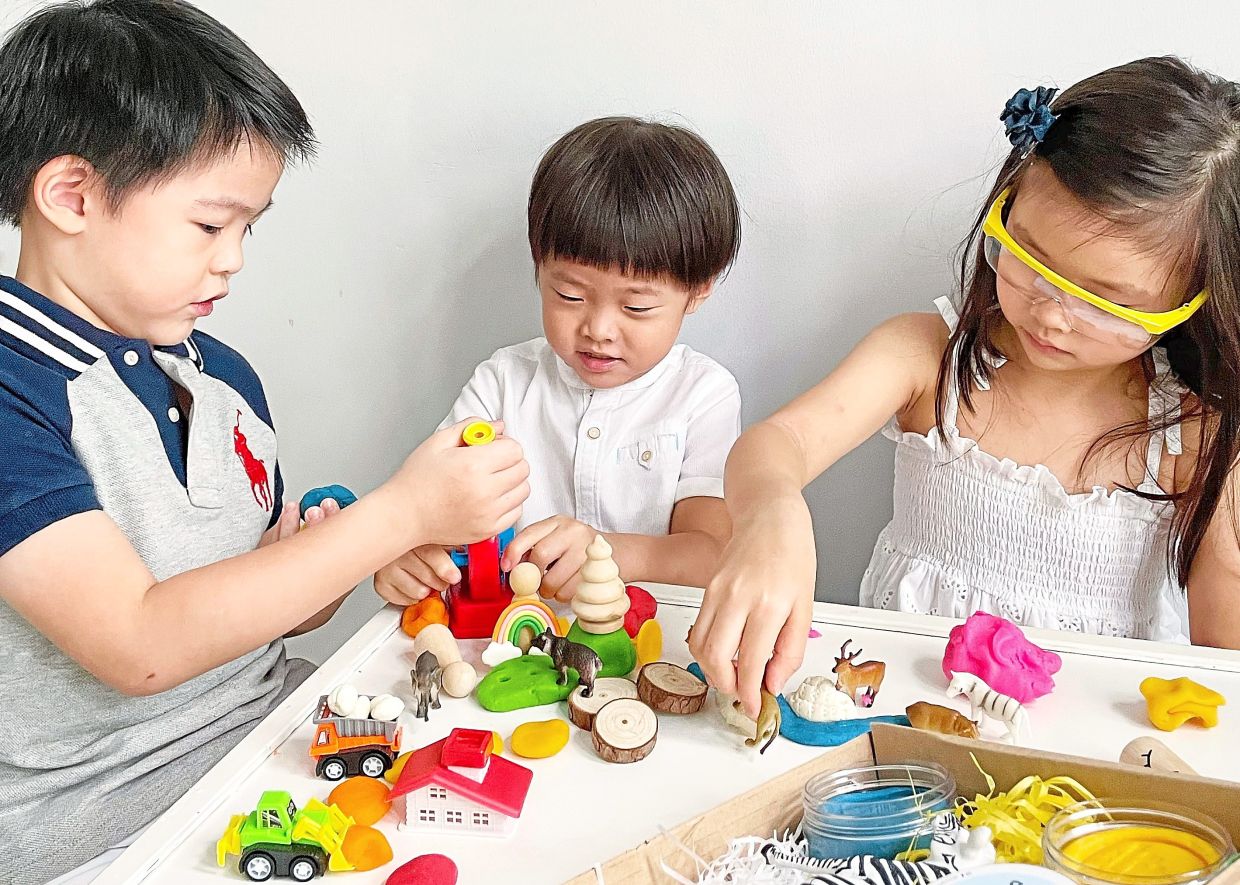 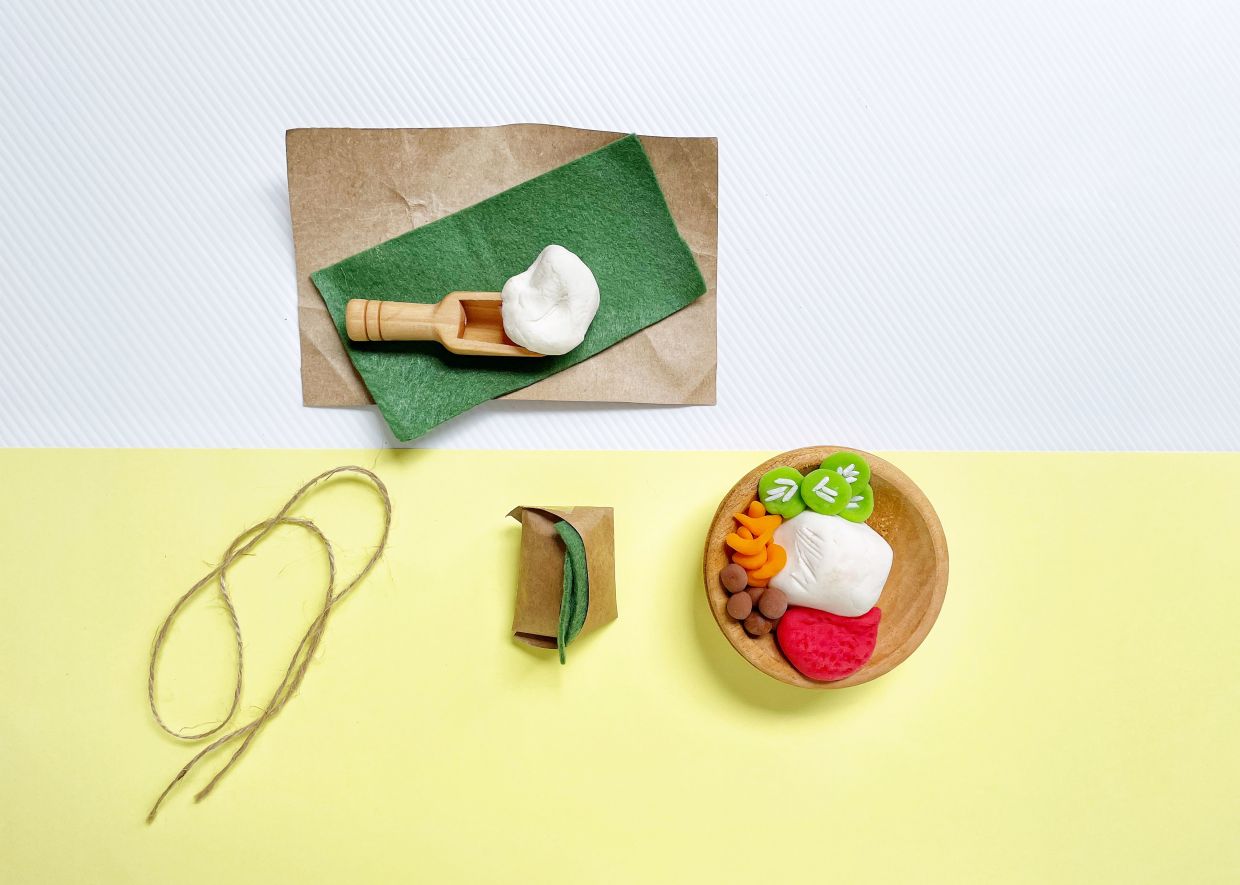 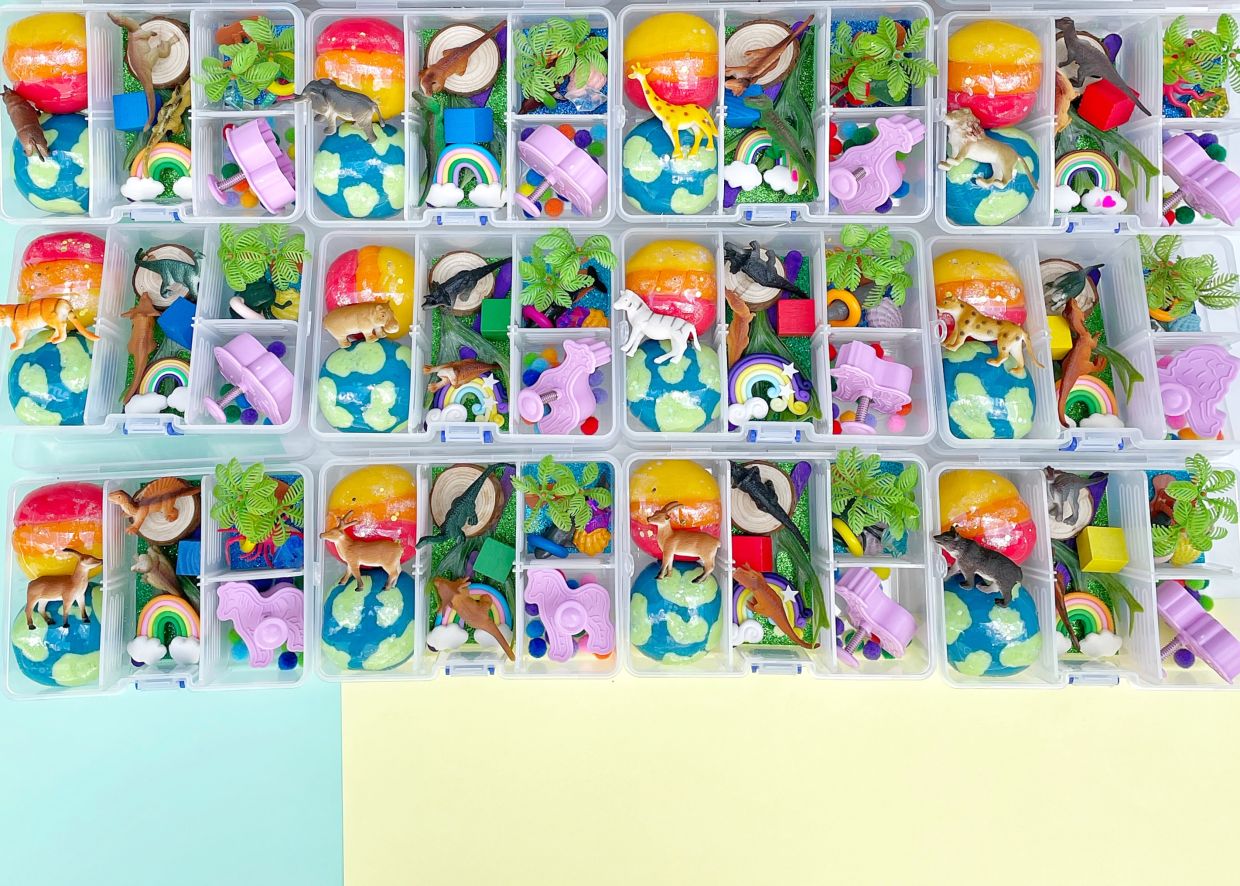 Dr Wong Mei Mei says that her children are the inspiration behind her playdough and they’re 'little ambassadors' for it. Photo: Dough Little Playdough

Wong created each playdough kit to tell a story, celebrate a season and to inspire children to love and cherish their families. Photo: Dough Little Playdough

Transitioning from being a scientist to an entrepreneur wasn't easy but Wong says it's all about self-growth, going beyond her comfort zone, and challenging herself to do more in life. Photo: Dough Little Playdough

The playdough kits can be customised for special occasions such as children's birthdays. Photo: Dough Little Playdough

The Into The Wild playdough kits feature elements of wildlife, sea and earth for children to learn more about the natural world around them. Photo: Dough Little Playdough