Ngh believes in being hands-on and learning about the operations of the farm in order to be able to market the fruits well. Photo: Christine Ngh

Moving back to her hometown Titi Gong in Jelebu, Negeri Sembilan to be away from the city two years ago was a move in the right direction for marketing consultant Christine Ngh who owns her own company.

“Two years ago, I moved back to my hometown because I wanted to get away from city life for awhile. Then the pandemic happened and I stayed on,” says Ngh.

Now, besides working from home(town), the 47-year-old also helps out at her boyfriend’s family-owned fruit farm.

Ngh and boyfriend Hoh Kam Chin, 47 have been selling durians and other fruit grown at his family farm, which is owned by his father, Hoh Chon.

Hoh’s father, who is now 84, has been running the farm single-handedly for over 30 years before Hoh returned from the England. Hoh returned from overseas three years ago to help his father on the farm. Photo: Christine Ngh

“I decided to return to Malaysia in 2019 during the durian harvesting season to help my father on the farm because he’s getting on in age,” says Hoh, adding that his girlfriend, Ngh now contributes her expertise in marketing the fruit, which has been rather difficult during the pandemic.

Because of MCO restrictions during the pandemic, wholesalers who usually come to collect the fruits from the farms to sell in the city aren’t as frequent and the prices they offer are also lower. Hoh’s father and many other farmers in the area were impacted. “It was difficult, so we decided to go to the city to market and sell the fruits directly to the consumer ourselves, rather than go through the middlemen,” says Ngh.

The enterprising couple started doing this in May this year after their pineapple harvest.

“The wholesalers came less frequently, fruit sales dwindled and the price of pineapple dropped. So we went out to see what could be done,” she says.

With her marketing background, Ngh managed to find ways to establish contacts and market the fruit directly to end-consumers as well as middlemen such as fruit shops.

After establishing their network, the couple decided to continue when the durian season hit.

“A lot of the fruits on the farm are seasonal, so we’re continuing with the momentum, and selling the fruits when they’re harvested,” she says. “Now, the durian season is coming to an end, and we’re going into the mangosteen and rambutan season.”

Ngh has found her experience in running her small marketing consultancy coming in handy. 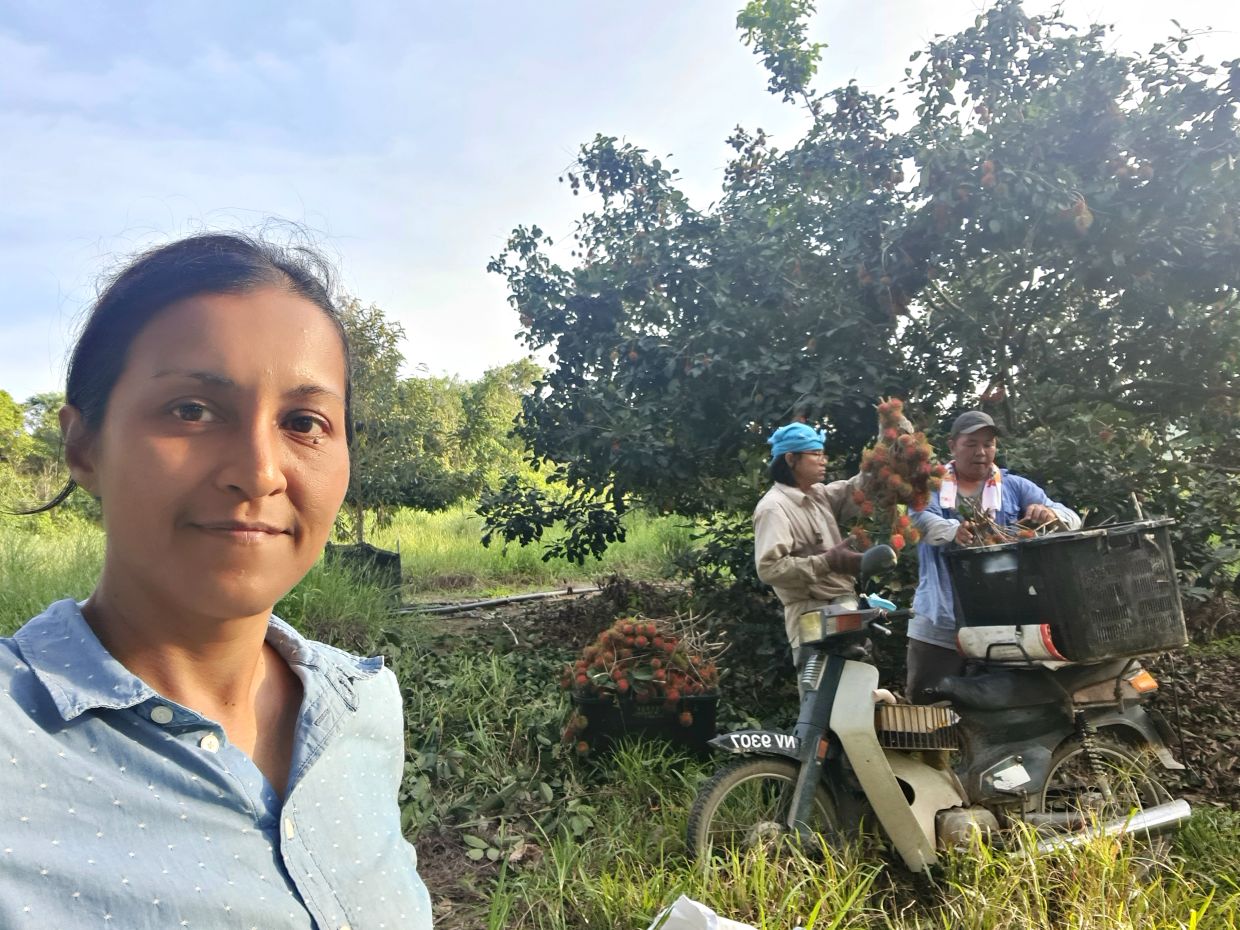 “I wanted to use the experience and knowledge I gained through the marketing and promotions work that I did for my company, to help my boyfriend’s family business,” she says.

“It’s not difficult to adapt to because it’s just an extension of the marketing work that I’m used to and it’s a good learning curve for me,” she says.

“Even before I started my consultancy, I was always working in marketing and sales. So it’s just a flow over to a different kind of industry – firstly to my own small business, and now to farm produce,” she adds.

Ngh says it’s like going back to her childhood roots, because she grew up in Titi Gong, a “small village famous for its small family-owned fruit orchards and Hakka cuisine” where her Hakka Chinese father and Indian mother live.

But Ngh doesn’t just help market the farm produce, she also helps out at the farm.

“In order to be good at marketing a product, it’s important know about the operations so I try to be involved in the actual farming and learn as much as I can. It’s necessary to get firsthand knowledge so that I can offer the best to our customers – whether they’re end-consumers or middlemen like fruit shops,” she says.

It can be challenging because farm work is manual labour, especially for smaller farms that aren’t industrialised and where there aren’t many workers or modern agricultural systems, she adds. “It’s a father-and-son team so there’s just the two of them, and now me. But occasionally, they do hire people from the neighbourhood to help out, like during harvest time.” 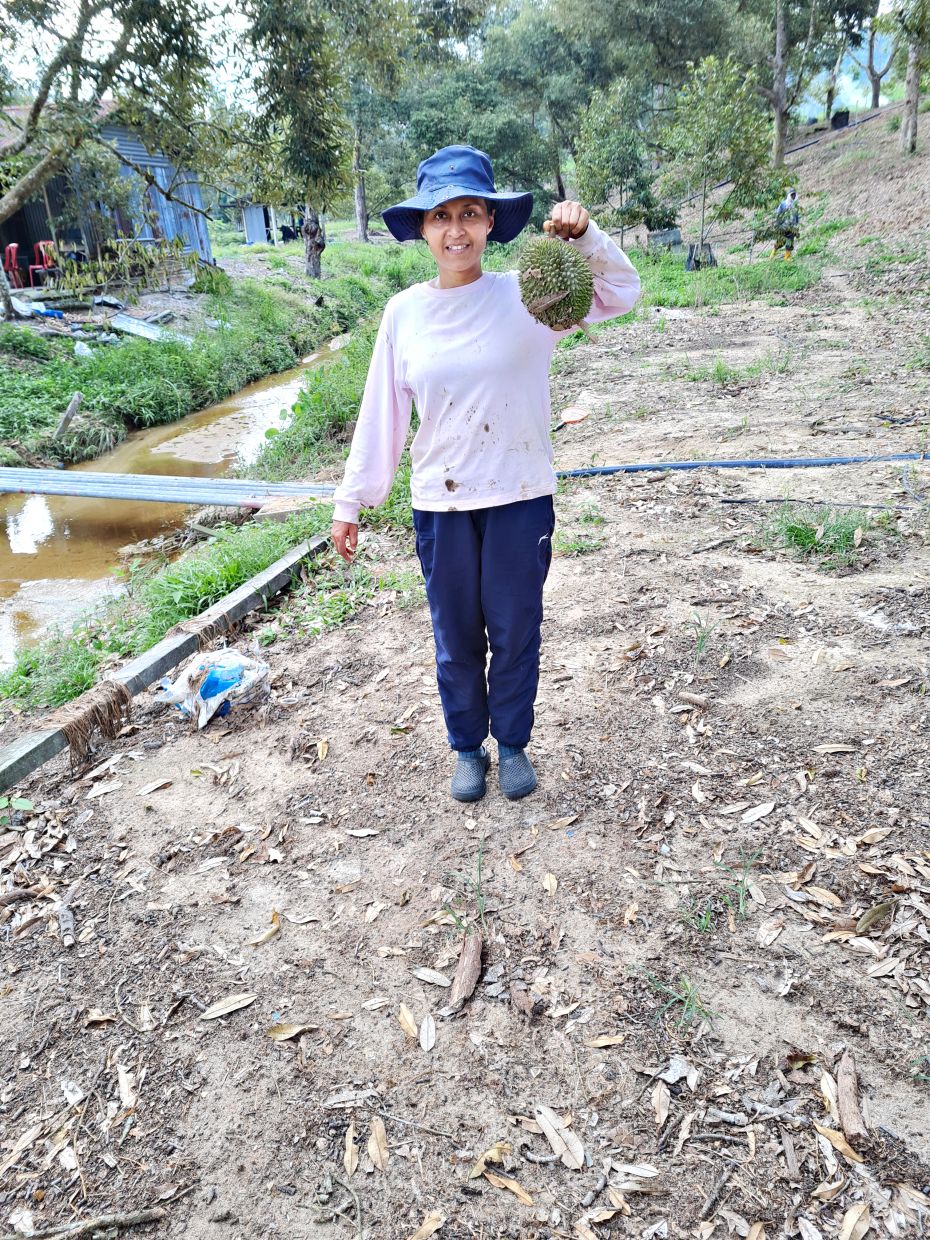 Ngh doesn’t just help market the farm produce, she also helps out at the farm. Photo: Christine NghNgh and Hoh go to KL a few times a week to make deliveries.

According to Ngh, her daily life is simple.

In the mornings, she does her office work – whether for her consultancy or communicating with fruit buyers such as end-consumers and fruit sellers.

“I’ll tell them what we have right now and find out what they want,” she says.

Then, in the afternoons, she goes to the farm.

“I go to check what’s available and when the harvest is done, and also to help out with ‘manual labour’ including harvesting, fertilising, watering of the smaller trees,” she says.

“It’s hard work but it’s not all that bad. I was already working from home before the pandemic. So it was an extension of what I was doing before, but now I also help out on the farm.”

“I enjoy it very much because in pandemic times, there’s nothing much that you can do. You can’t go out and socialise, so it’s good to put your energies into something useful, especially something wholesome and healthy. Plus, I also get a lot of exercise,” she adds.

Ngh says she intends to continue doing this after the pandemic.

“I’ve grown to like this lifestyle. Jelebu isn’t far from KL so even if I have my professional work in town, it’s just a two-hour drive and I can get there easily,” she says.

“Being in my hometown, I can also pay more attention to what’s happening in my community and get involved.

“I’m glad to be able to help out and it’s also part of my philosophy: if I start something, I want to continue to build it,” she concludes.

Videographer turns to selling fruits to support his family during pandemic

From event management to online trading

Curating opportunities during the pandemic through private dining experiences 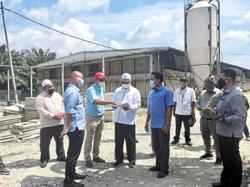