'I'm a loser in real life, but I'm 'somebody' in the game': A game addict's tale

An addict is usually hooked onto the buzz, adrenaline rush, excitement and sense of achievement that comes from the game. Photo: 123rf.com

“In real life, I was a loser, with no girlfriend, and not good looking – just a nerd. But in the game, I was a ‘somebody’ – powerful, rich, attractive and had a beautiful girlfriend, ” he says.

“I was only happy and not depressed when gaming. It’s been that way for many years since I was a teenager, ” he reveals, admitting that he suffers from feelings of inadequacy and loneliness, which led to his depression.

He had begged his parents to get him all the latest games consoles that his friends had: Nintendo, PlayStation, Xbox.

“I was playing all night and into the wee hours of the morning in my room. It felt so good, I could escape my feelings of inadequacy and stress from the real world (because of peer pressure) when playing these games. I became so good that I’d beat all my opponents 99% of the time, ” he relates.

The sense of achievement and being in control drew him deeper into gaming.

“It came to the place where I couldn’t find fulfilment or absorb anything in real life. I was a good student, but my grades grew worse, ” he says.

“But, most people don’t understand. To them, it’s just a game and they tell me, ‘If it affects your life so badly, why don’t you just stop playing?’ But, the truth is, I can’t, ” he says.

Gary is a game addict. Game addiction occurs when a person games excessively to a point that it interferes with his or her regular day-to-day activities. Photo: Fielpic

The World Health Organization (WHO) has classified gaming disorder as an official form of mental disorder. The World Mental Health Day on Oct 10 is a sober reminder that with more people stuck indoors during the pandemic, there is this danger of people - both children and adults - becoming addicted to video and Internet gaming.

Psychologist Associate Professor Dr Anasuya Jegathevi Jegathesan reveals that although video and Internet games can be a fun way to spend time and learn things, when it becomes excessive and starts to interfere with a person’s normal life and responsibilities, it becomes harmful.

“Just like people can drink coffee and it’s totally fine, if they get overly upset, lose their mood and can’t control themselves when they don’t drink it, then it is a sign of addiction.

“In the same way, game addiction occurs when a person games excessively to a point that it interferes with his or her day-to-day activities. Or, if they’re stopped from gaming, they get extremely upset and lose control of themselves, ” Dr Anasuya explains. 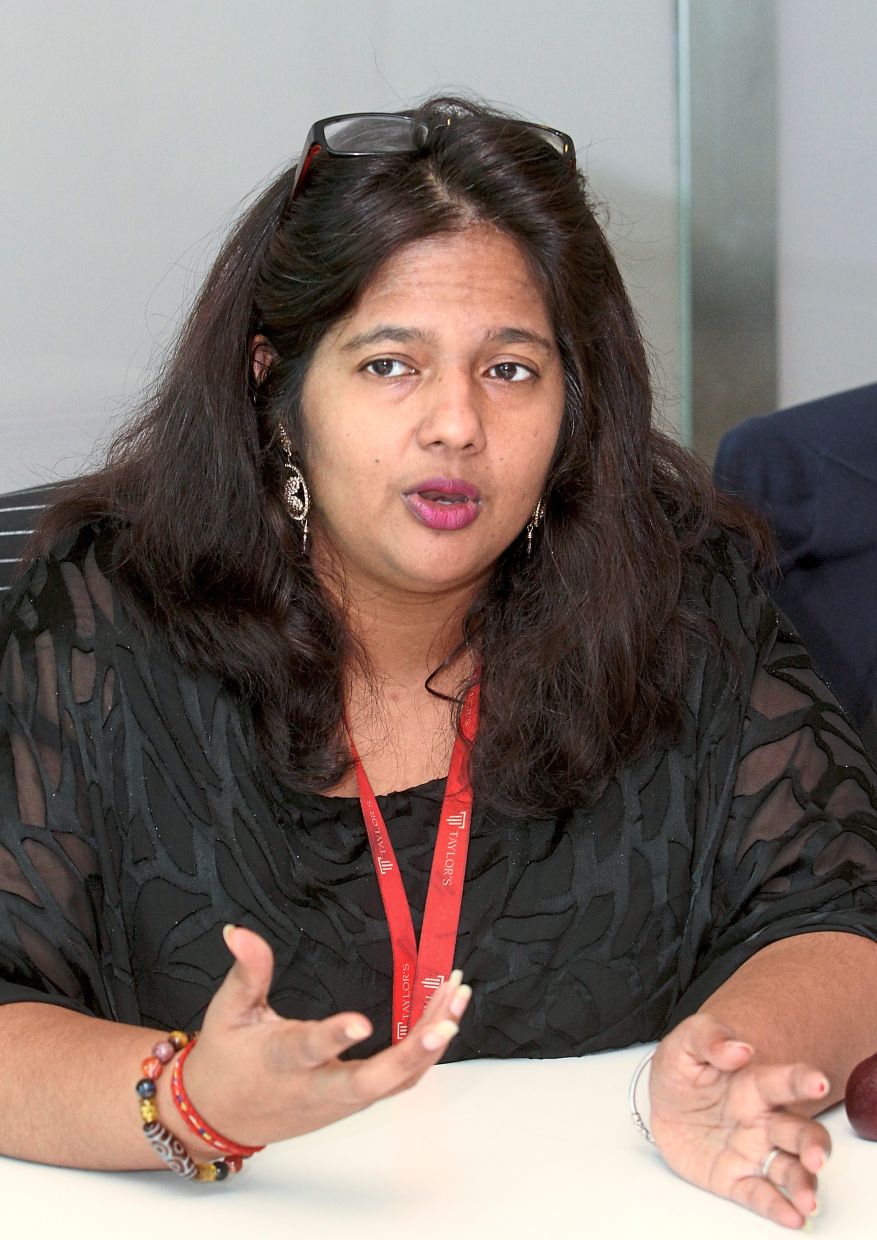 Teach a child to behave properly and how to be quiet in public, rather than use a mobile device as a ‘pacifier’, says Dr Anasuya.It isn’t unusual for parents to give devices like mobile phones with games to their children to keep them quiet or make them behave, especially when in a public space – at a restaurant or event.

This, Dr Anasuya points out, may encourage children to be overly dependent on devices.

Parents must, instead, set healthy limits for how much their children play games to prevent them from developing an addiction.

“Teach a child to behave properly and how to be quiet in public, rather than use a mobile device as a ‘pacifier’. This not only encourages over-dependence on devices, it’s also a short-term solution that leads to long-term problems and it doesn’t solve the issue in the first place, ” she says.

Instead, Dr Anasuya urges parents to teach children how to be patient, delay gratification, behave properly in public and in private, and to avoid using devices at the dining table and also in places such as houses of worship.

But, although game addiction can impact children, it is more of an issue with those who are in their late teens or early adulthood who have more freedom and money, she says.

Am I an addict?

There are several symptoms of game addiction.

Game addicts often deem interactions in the games they are playing to be more important than those in real life. They may play for many hours every day, neglecting things like personal hygiene, mealtimes, sleep, studies or work, and they may even hide how much time or money they spend on playing the games, Dr Anasuya says.

According to the American Psychiatric Association, there are nine criteria that characterise internet gaming disorder: preoccupation about the game even when not playing, withdrawal symptoms such as restlessness or irritability when unable to play, tolerance increasing as in needing longer play time or more exciting games to feel satisfied, difficulty in stopping or reducing playing time, loss of interest in other activities, continuing despite other problems (such as lack of sleep, being late for school or spending too much money on games), deceiving family or friends about how long one plays or how much one spends on games, escaping personal problems or other negative emotions through games, and risking relationships or opportunities. Game addicts often deem interactions in the games they are playing to be more important than those in real life. Photo: Filepic

“I started lying to my parents, I even ‘borrowed’ my mother’s credit card and spent thousands on in-game purchases like upgrades, accessories, and more, ” Gary says.

Dr Anasuya reveals that an addict is usually hooked onto the buzz, adrenaline rush, excitement and sense of achievement that comes from the game. They often use games as a coping mechanism to deal with any unhappiness or lack in their lives.

“I could control my game character and level up. I could boost up my skills, make friends with people I’d met online. When I levelled up, the rewards became greater. I became a leader of a group, I had another life, a better life, ” Gary describes.

“This fantasy world I’d grown accustomed to became more real than the real world itself. It was a better world; it could be all I wanted it to be, a place where there was always a happy ending, ” he says.

Dr Anasuya explains that some games have a mechanism similar to gambling where a gamer needs to put in money for additional lives, items or upgrades.

“This algorithm in the game actually creates or feeds the addiction, ” she says.

“This is very different from other kinds of gaming such as e-sports which can be a kind of career, ” Dr Anasuya says, adding that gaming isn’t always negative, and it can have a good purpose and good result when used wisely. Games aren't a bad thing - they can be fun and educational - but when in excess, they can become harmful. Photo: Filepic

So how do parents recognise signs of game addiction in their children (teenagers)?

Gary’s mother, Madam Ng (not her real name) says that her son always had dark circles under his eyes and looked haggard even though he was still young.

“He became more withdrawn and was always on his computer or handphone. Initially, we thought he was just stressed with studies and studying too much. But he was actually gaming, ” Ng says.

“He often gamed until he missed meals and sleep. It got to the point where he skipped school just to game without our knowledge. He started lying about where he was and how much time he spent on games.

“Then one day, I discovered he had spent thousands of dollars on in-game purchases using my credit card. That was the last straw. That was when everything blew up.

“His father took away his computer and mobile phone. Gary was banned from playing any more games. We even started him on counselling, ” says Ng.

When a family member, especially a child (teenager), is a game addict, there are several things that one can do, says Dr Anasuya.

“Firstly, it’s important to determine whether they are just engrossed in a game or whether they really are a game addict. It’s important for parents to communicate with their child and each other on the best course of action, ” she says.

“Secondly, find out why they need to game to feel good about themselves. The reason behind the addiction could be because they can’t handle other issues in their life such as stress from studies, feelings of inadequacy, loneliness, or depression, so they’ve retreated into the fantasy world of games, ” she adds.

“Thirdly, how can the addiction be replaced by healthier activities and how can family members help support them by making life better, more acceptable and sometimes more challenging and fun for them?” she says. It's important to support a family member with an addiction, but not feed their addiction. Photo: Filepic

According to Dr Anasuya, it’s important to support a family member with an addiction, but not feed their addiction.

“Remove them or remove the cause of their addiction, and teach them to be responsible for their own actions, ” she advises.

When it is particularly bad, then parents may wish to bring their child (teenager) to see a counsellor or clinical psychologist to deal with the behavioural issue.

Today, Gary is studying in a vocational college and working part time.

“His father wanted him to take on this job to learn responsibility and be part of society and ‘real’ life, and to interact with real people, rather than being in a fantasy world, ” says Ng.

She adds that Gary’s income goes into a joint account and initially went towards paying for what he spent on games. He has fully paid back his gaming debt, and the rest is kept for his future, to buy a car and later, a house, she adds.

Gary says: “Keeping busy – studying, working, exercising, volunteering at an animal shelter - also helped take my mind of games. I just have to focus on one day at a time, ” he says.

“I’m one of the fortunate ones. I guess in a way, you could say, I outgrew it after all the counselling, and with my parents’ support but there are some who aren’t so lucky, ” he concludes.

CMCO: Family of seven a little anxious, taking things one day at a time

It's not just kids: How an adult game addict's obsession cost him his family

Small businesses, big dreams of Iraqi businesswomen
She fled Mexico at 17 and now devotes her life to helping migrants
Starchild: Malaysian children look forward to welcoming the Lunar New Year
Jacinda Ardern leaves a legacy forged from crisis
UK MPs involved in row over how female Doctor Who influences boys
Free tattoos give hope to Dutch breast cancer survivors
Engaging children in cooking and baking has numerous benefits
Malaysian teacher charts her own happy future after difficult past in orphanage
Malaysian artist overcomes traumatic childhood to stay on the right path in life
Malaysian children share about being kind and caring