ReHAK social workers often have to visit the homes of their clients to assess the situation and be better able to help them. Photo: Reproductive Health Association Kelantan

During the pandemic, the demand for social workers has become even more critical with an increase in the number of cases.

“There is anxiety over the loss of jobs leading to other social issues, restriction of movement where families being cooped up together may result in more incidents of domestic violence. Some clients have also experienced a loss of income and are unable to come for treatment, ” says Universiti Malaya Medical Centre (UMMC)’s Department of Social Work senior community development officer Khalidah Mustapa.

Women’s Centre for Change (WCC) Penang service manager Mangeswary Subramaniam says that she and her colleagues have had to change the way they serve the needs of their clients, especially for domestic violence cases.

“Instead of meeting them face-to-face, we used online platforms to reach out to them. We’ve started to provide online counselling via Zoom and WhatsApp, in addition to our on-going telephone counselling. We’ve also expanded to do online webinars in various languages on domestic violence, sexual harassment, child sexual abuse, and cyberbullying,” she adds.

Mangeswary adds that there’s an increased risk when providing safe shelter in their facilities, especially for women who face domestic violence.

“This is because it’s difficult to provide comprehensive Covid-19 screening in a sustainable manner. Even before the pandemic, there is already a lack of adequate shelter for survivors of domestic violence nationwide and the pandemic further aggravates the situation,” she says.

But there are also issues with going online. “Our latest project with adolescents involves students from a school in Kota Baru. This two-year project sponsored by Unicef involves 150 children and their families.

“During the MCO, we couldn’t run regular activities with the children at the school. We also couldn’t visit families during the MCO so we supported them through communication via phone and online through social media,” reveals Siti Hawa.

But, some of the children have issues such as poor internet connection for smartphones or computers, while others don’t even have a smartphone or computer, or their families don’t have the finances to top-up their Internet data.

“A family with eight children may have difficulties taking part in school activities (online) during the MCO because the whole family only has two low-spec handphones with limited function. They may not even have funds to top-up the Internet data and would rather save for other necessities like food,” Siti Hawa cites an example.

Recently, when a corporate sponsor announced they would provide free handphones to children from B40 families, ReHAK arranged for the phones to be provided with expenses for top-up to 40 children.

Emotional support, direct aid and information access become even more vital to these children and their families during the pandemic, Siti Hawa adds.

“Over 70% of the children revealed they were worried about their family’s economic situation since their parents are daily wage earners whose income is impacted during the MCO,” she reveals.

“We help direct such children and their families to possible resources where they can receive help and even support them to apply for aid (online),” she says.

“Our social workers are involved in running community outreach and educational programmes that help create awareness in target groups on health issues such as HIV, and helps them understand factors that may increase risky behaviours among adolescents such as cyber bullying,” explains Siti Hawa. She adds that children’s rights and protection, and gender based violence are also of concern. 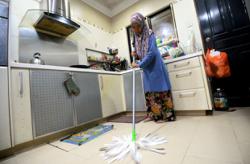 Loud and proud: Serbian Roma girl band sings for women's empowerment
Sri Lanka's belated #MeToo movement starts from its newsrooms
Tinder adds new features as love seekers stay virtual
School community raises funds for 600 pairs of shoes for Orang Asli children
'I had to put an end to it': French woman who killed rapist husband goes on trial
Hollywood's sexist stereotypes have real consequences for female journos
Women migrants forced to be sex slaves in Libya 'hell'
Malaysia's king of swing shares what fatherhood means to him
Starchild: Our young readers celebrate their dads this Fathers Day
Filmmaker father shares about his parenting style, teaching his children about the world