Until there is a comprehensive law that can protect them, victims don’t feel safe reporting sexual harassment. Photo: 123rf.com

Amelia* (not her real name), 38, who works in a male-dominated field – building and construction – often has to put up with sexist remarks and behaviour from her male colleagues and superiors. They would tease her for "dressing like an ah ma (old lady)" and urge her to “sexy a bit, lah”, especially when meeting important clients.

One male colleague keeps making remarks laden with sexual innuendos about Amelia even in her presence.

It happened so often that she simply became accustomed to brushing the comments off as part of the cons of being in a male-dominated industry.

“I was assigned a project outstation which required me to travel with a male colleague. My company insisted that I share a room with my male colleague to save costs even though I didn’t feel comfortable with it, ” she says.

“I was told not to be ‘old-fashioned’ and that it’s normal for men and women to twin-share a room and besides, it’s not the same bed, but I felt that it was an invasion of my personal space and privacy as a woman, ” she adds. 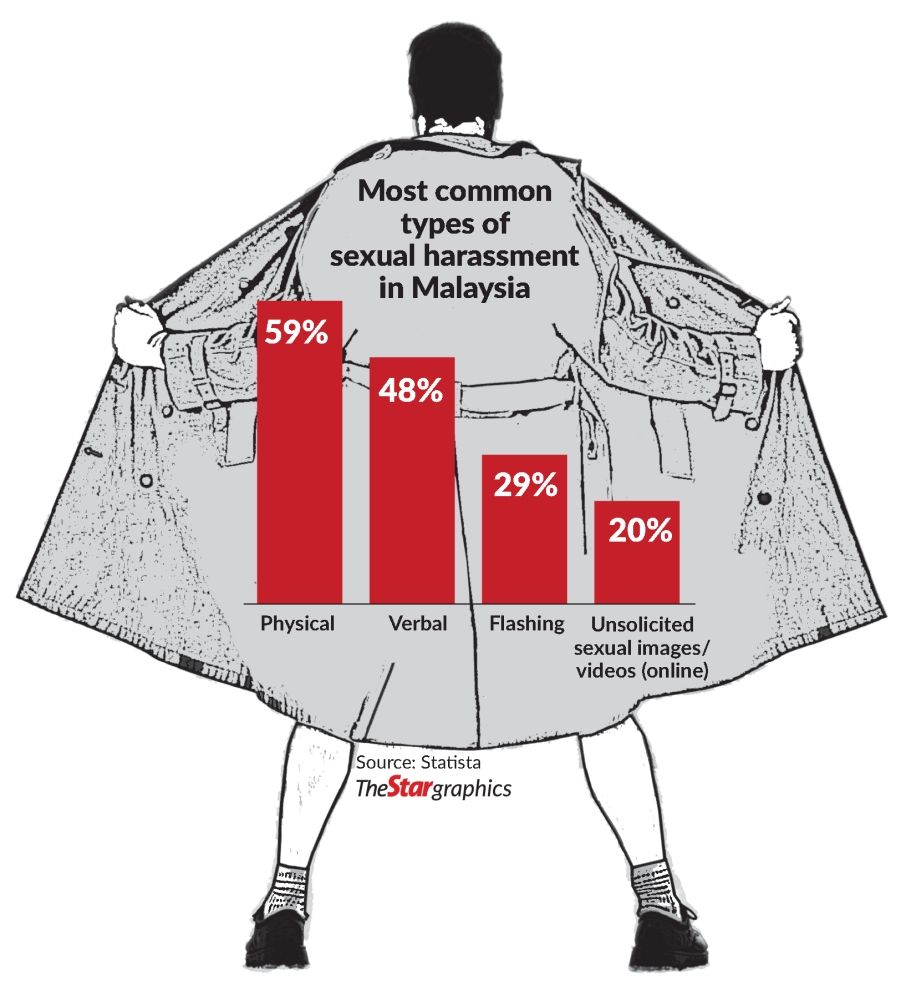 Amelia didn’t feel like she could turn to her employer – who was a man – who had approved the room-sharing for the trip.

It didn’t help that other male colleagues made snide remarks to the colleague she was supposed to have shared the room with that she should be “grateful for the attention of a man even if something were to happen since she was a spinster”.

Amelia reveals that she doesn’t know what her company policy on sexual harassment is or even if such a policy existed. But she kept silent because she felt nothing would happen or, worse, there would be repercussions if she were to complain. Her greatest fear was losing her job because she is the sole breadwinner and has an elderly mother to take care of at home.

Fortunately for her, the project was put on hold and Amelia avoided an uncomfortable situation that could potentially have been risky too. 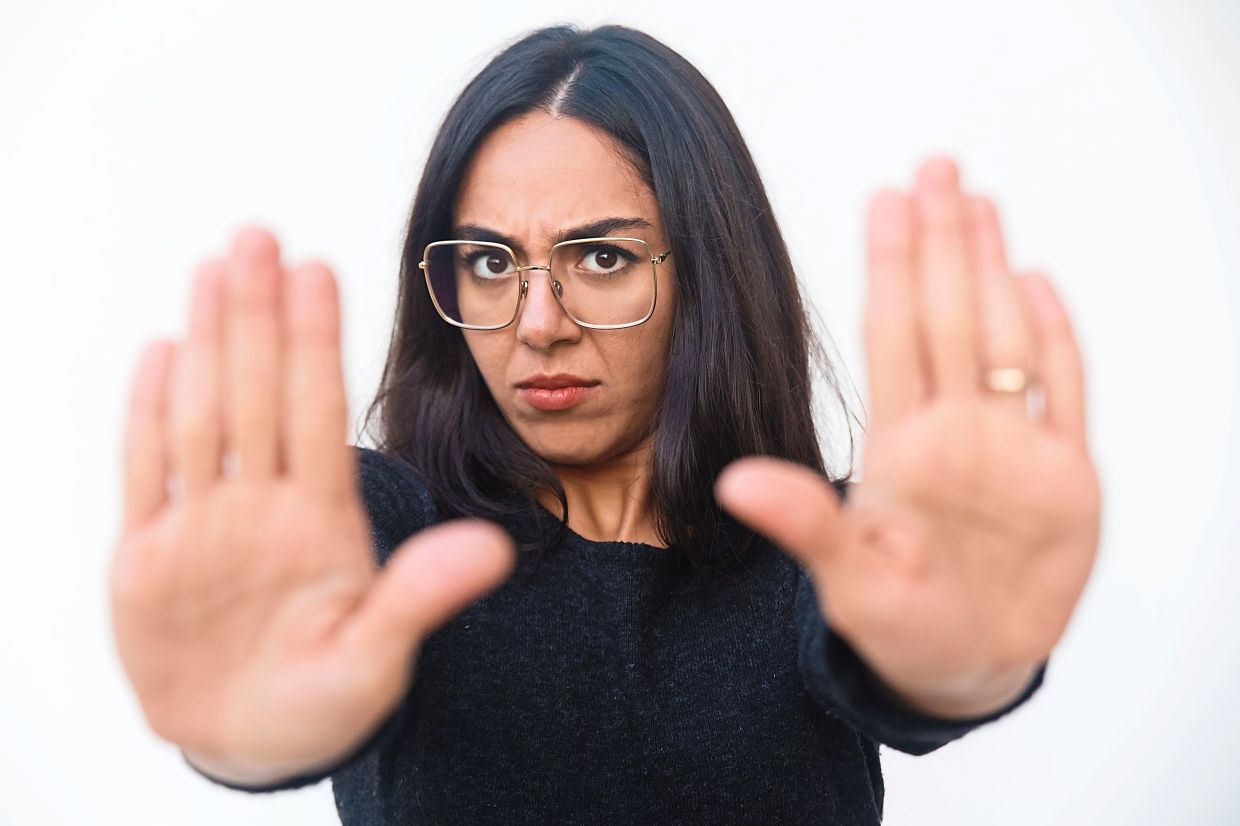 Stop! It's not harmless, it's harassment. Photo: Filepic

While there isn’t a law against room sharing with colleagues (whether of the same gender or not), employers need to come up with a code of conduct for employees to ensure their staff feel safe from harassment of any sort, says Association of Women Lawyers vice president Meera Samanther. A Code of Practice on the Prevention and Eradication of Sexual Harassment (Code of Practice) was introduced by the Human Resources Ministry (MOHR) in 1999 but it does not have the force of law. Companies and organisations are encouraged to implement the code or come up with their own but they are not compelled to.

Like Amelia, many employees don’t even know if the company they work for has a code of practice on sexual harassment.

“Often, even though there is a policy on sexual harassment, it is voluntary and not strictly enforced by organisations and institutions, ” Samanther says.

Sexual harassment is defined as “any unwanted conduct of a sexual nature, whether verbal, non-verbal, visual, gestural or physical, directed at a person which is offensive, humiliating or a threat to their well-being”. 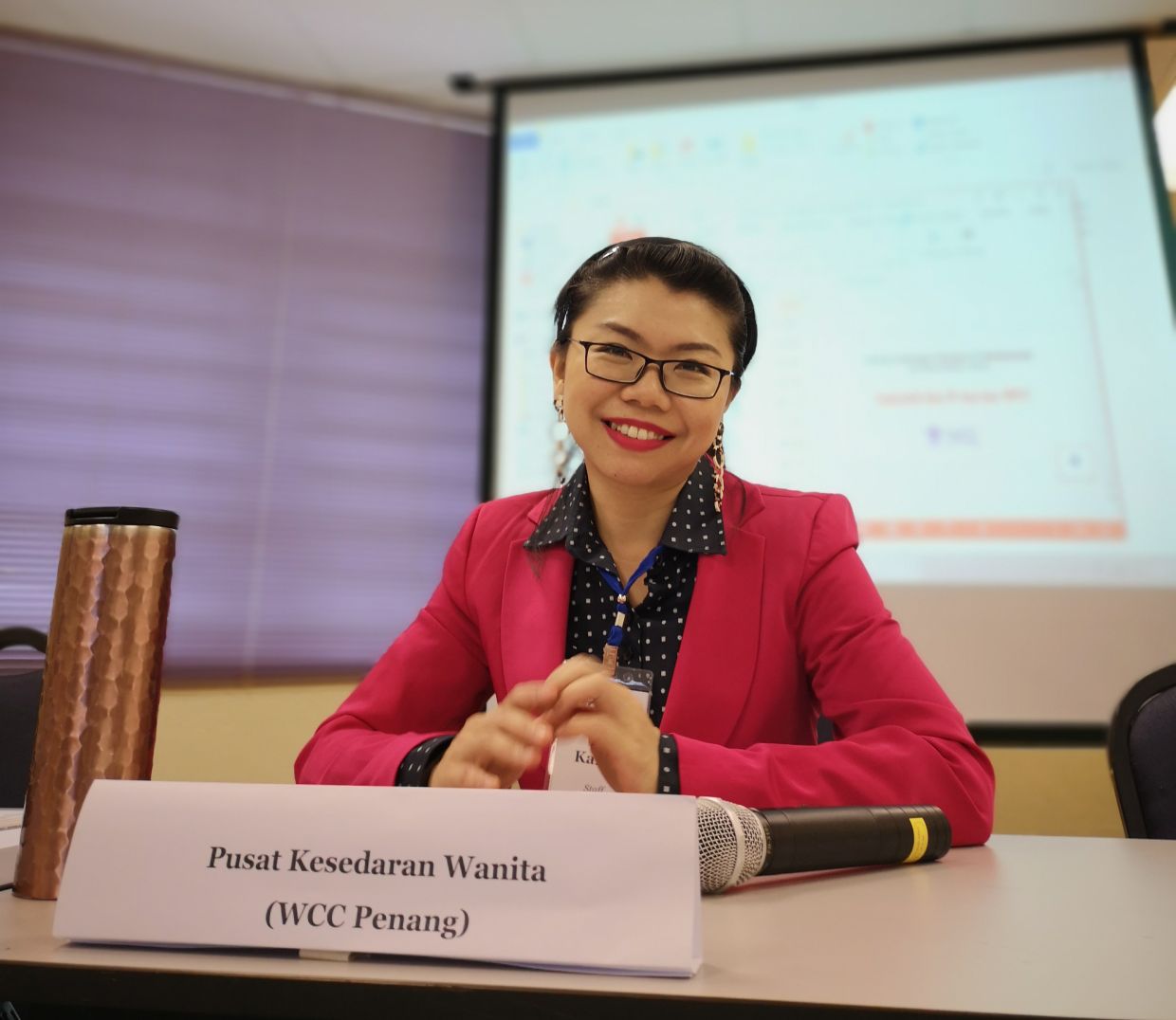 “Sexual harassment is an assault on the victim … it is not acceptable and they have a right to report it. It is their human right,” says Lai. Photo: Karen Lai

“It is essentially an assault on the victim, and whether it is verbal, visual, gestural, psychological, physical, or virtual, it is not acceptable and they have a right to report because it is their human right, ” she adds.

But, because there isn’t yet a comprehensive law on sexual harassment, reporting sexual harassment can be tricky. While there are provisions under part XVA of the Employment Act 1955, these are limited.

Certain sections in the Penal Code offer some protection, but only when it comes to physical forms of sexual harassment.

Without a clear definition of what sexual harassment is and how they can be protected, victims are reluctant to say anything. 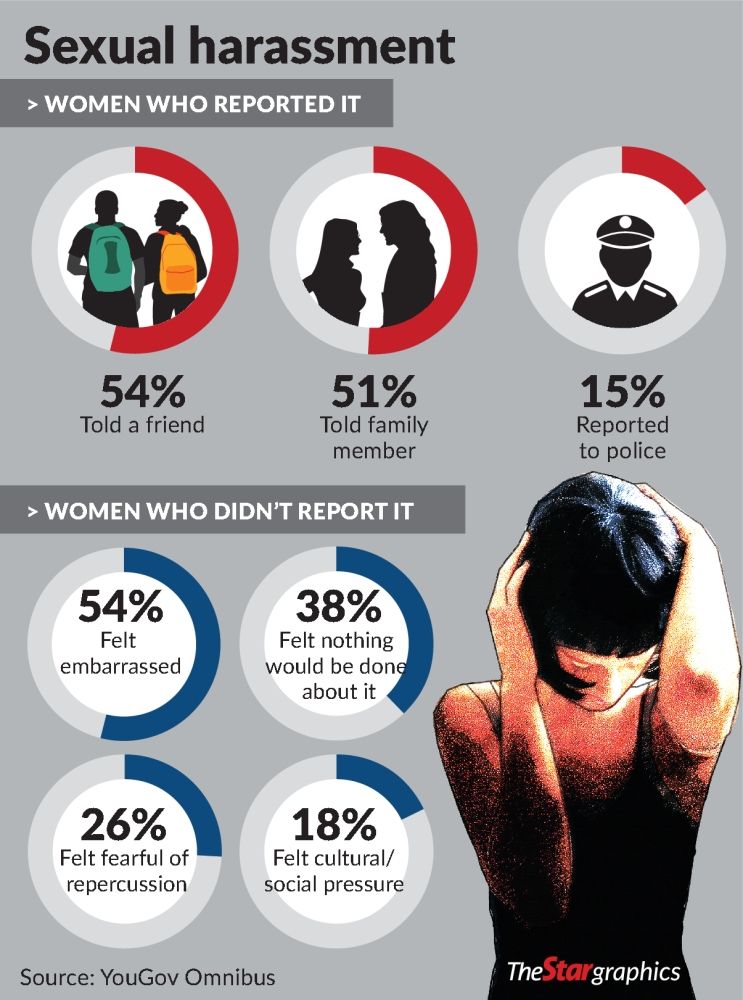 Women, Family and Community Development Minister Datuk Seri Rina Mohd Harun recently announced that the proposed Sexual Harassment Bill, which has been on the drawing block for years, was on track to be tabled in Parliament before the end of the year.

The proposed bill should provide a comprehensive definition of sexual harassment and lay out more mechanisms for victims to lodge complaints.

It will also propose remedial elements and penalties for offenders, and hopefully give victims like Amelia more confidence to stand up against harassment.

But until the law is actually passed, many victims would rather not report their harrasment for fear of not being believed and instead, being shamed.

The recent video of a MRSM Baling teacher blaming victims’ attire and behaviour for rape underscores the shaming that prevents women from reporting harassment.

Instead, more and more victims are turning to social media to share their stories, expose their harassers and get support from other victims or a more empathetic public.

Even though sharing personal and painful details of their harassment exposes them to scrutiny, and sometimes, hurtful judgement from strangers, these victims find the solace and support that they need, to move on.

“Individuals who have been sexually harassed have to deal with a variety of emotions. The psychological impact of the incident often leaves them feeling paralysed, humiliated, embarrassed, angry, frustrated, ” says Samanther. 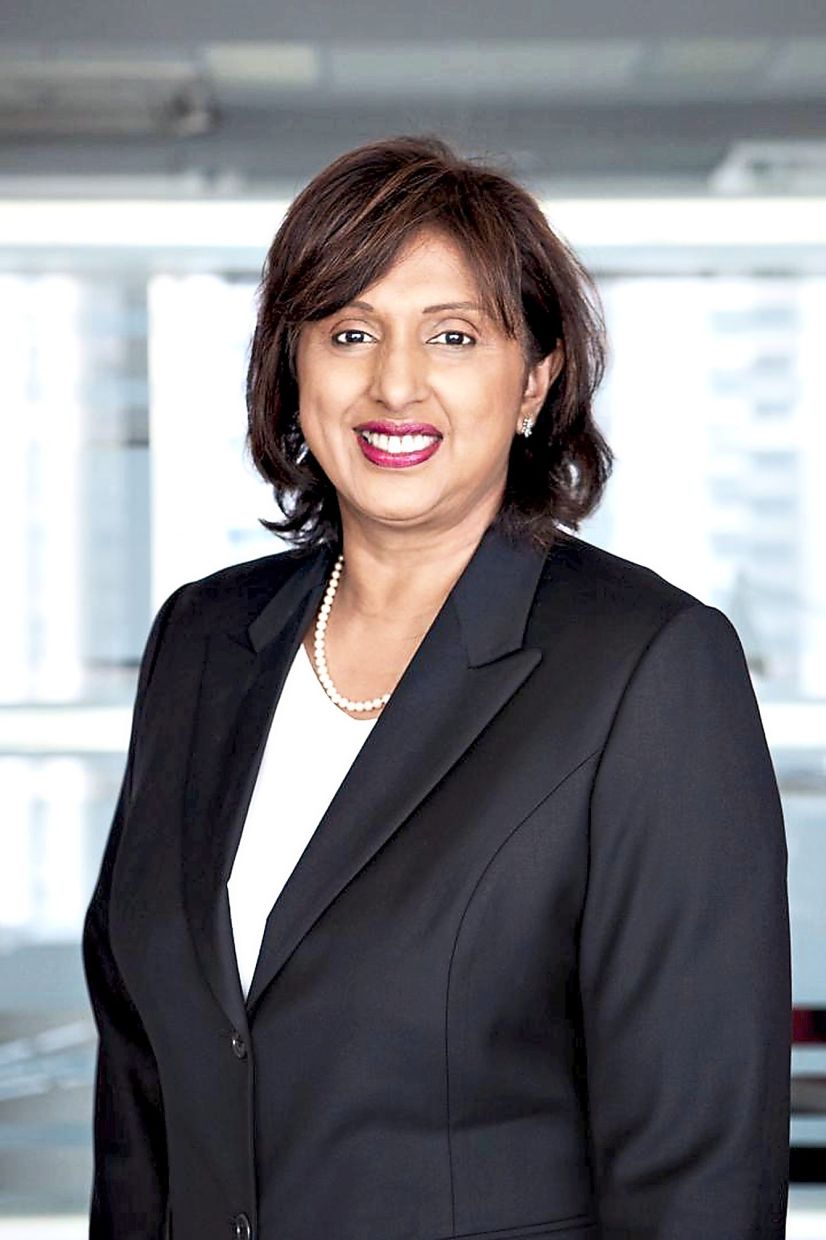 “Individuals who have been sexually harassed often feel paralysed, humiliated, embarrassed, angry and frustrated,” says Samanther.“Social media is a way of finding support from others who may have encountered harassment from the same person.

The Council also included sexual harassment as a defined “misconduct” in its proposed Legal Profession Bill, which it hopes to get tabled and passed in Parliament this year.

It has also pledged to formulate a model Sexual Harassment Policy for law firms that will require employers to execute a workplace pledge against sexual harassment, making available walk-in centres for victims to lodge complaints, taking steps to protect victims from dismissal, and holding seminars and training to raise awareness among Members of the Bar and students.

There is little doubt that social media has the potential to amplify one’s message and bring about change quickly.

But Samanther cautions that there are also risks of seeking redress on social media.

“Victims’ lives may be examined, even by strangers who don’t know anything about the incident. Victims open themselves up to negative comments, verbal or social threats, and blame. Also, once it is posted on social media, it can be shared or screenshot and forwarded onto other platforms and may go viral, ” she says.

And, if the perpetrator is a known person, there is also the threat of defamation since he could file a suit against the victim and claim the incident never happened.

Recently, a young woman - who had encountered sexual harassment - filed a police report and then appealed on Twitter that anyone else who had been victimised by the perpetrator, also lodge a police report.

Besides speaking up on social media, she also went through formal channels to seek justice.