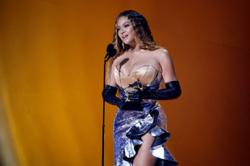 According to Billboard, the sale includes all 290 songs Bieber’s released through Dec. 31, 2021, including his most recent album “Justice,” which came out that year.

“The impact of Justin Bieber on global culture over the last 14 years has truly been remarkable,” Hipgnosis founder and chief executive Merck Mercuriadis said in a statement.

“At only 28 years of age, he is one of a handful of defining artistes of the streaming era that has revitalised the entire music industry, taking a loyal and worldwide audience with him on a journey from teen phenomenon to culturally important artiste.

“This acquisition ranks among the biggest deals ever made for an artiste under the age of 70, such is the power of this incredible catalogue that has almost 82 million monthly listeners and over 30 billion streams on Spotify alone. Scooter Braun has helped him build a magnificent catalogue, and it’s a pleasure to welcome Justin and his incredible songs and recordings to the Hipgnosis family.”

The deal represents the largest acquisition for Hipgnosis yet. In 2021, Neil Young sold 50% of his catalogue to the British investment firm. They bought Leonard Cohen’s and Justin Timberlake’s catalogues the following year.

Bob Dylan, Bruce Springsteen and Phil Collins are among the artistes who have sold their song catalogues as well, although to different firms.

It’s unclear if Bieber’s sale is related to his 2022 diagnosis of Ramsay Hunt syndrome, a rare disease that causes facial paralysis and led to Bieber cancelling tour dates. Bieber said at the time he planned to resume the tour in 2023. – New York Daily News/Tribune News Service

Michelle Yeoh 'overjoyed' with first Oscar nomination: 'I will forever cherish this moment'