Journalist Christiane Amanpour (right) says that an interview with Iranian President Ebrahim Raisi was scrapped after he insisted she wear a headscarf. Photo: AFP

Amanpour said on Twitter that she had planned to ask Raisi about a slate of issues, including protests and international criticism over the death of 22-year-old Mahsa Amini, who was detained after violating the country's dress code.

Amini was arrested this month by Iran's "morality police" for not properly covering her hair with a headscarf, or hijab. She collapsed at a detention centre, fell into a coma and died days later, according to a statement from Nada Al-Nashif, acting UN high commissioner for human rights.

Thousands of protesters have rallied since her death, including in her home city, Saqez. The US government on Thursday (Sept 22) imposed sanctions on the country's morality police and other officials.

At least nine protesters have been killed in clashes with Iranian police.

"This was going to be President Raisi's first ever interview on US soil, during his visit to NY for UNGA. After weeks of planning and eight hours of setting up translation equipment, lights and cameras, we were ready. But no sign of President Raisi," Amanpour tweeted on Thursday, referencing a meeting of the UN General Assembly.

She said that 40 minutes after the interview was supposed to begin, an aide for the Iranian president said the leader had suggested Amanpour wear a headscarf "because it's the holy months of Muharram and Safar."

"I politely declined. We are in New York, where there is no law or tradition regarding headscarves. I pointed out that no previous Iranian president has required this when I have interviewed them outside Iran," Amanpour tweeted, adding that the aide, whom she did not identify, then told her the interview would not go forward if she did not wear the covering.

Treasury Secretary Janet Yellen said in a statement Thursday that the US is calling on the Iranian government "to end its violence against women and its ongoing violent crackdown on free expression and assembly."

"Mahsa Amini was a courageous woman whose death in Morality Police custody was yet another act of brutality by the Iranian regime's security forces against its own people," Yellen said. – USA Today/Tribune News Service 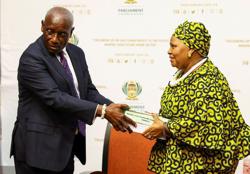