Adam Levine says he did not have an affair with Instagram model Sumner Stroh (right). Photos: TNS, Sumner Stroh/Instagram

Maroon 5 frontman Adam Levine says he did not have an affair with Instagram model Sumner Stroh but admits that he “crossed the line” by having “flirtatious” exchanges with someone who was not his wife, Behati Prinsloo.

Stroh made her allegations Monday (Sept 19) in a TikTok video that went viral, in which she said she had been “having an affair with a man who’s married to a Victoria’s Secret model.

“At the time I was young, I was naive,” she said. “Quite frankly, I feel exploited. I wasn’t in the scene like I am now, so I was definitely very easily exploited.”

After saying that Maroon 5 was “practically elevator music at this point,” she admitted that the man was Levine. “Adam and I were seeing each other for about a year,” she said before presenting DMs she described as “how he came back into my life” after she ended things.

“Ok serious question,” Levine’s alleged direct message to her read. “I’m having another baby and if it’s (a) boy I really want to name it Sumner. You ok with that? DEAD serious.”

Stroh said she was “in hell at this point,” with her morals “unknowingly compromised.” She said she was “completely manipulated.”

Levine spoke out in a statement Tuesday.

“A lot is being said about me right now and I want to clear the air,” Levine said in a post to his Instagram Stories. “I used poor judgment in speaking with anyone other than my wife in ANY kind of flirtatious manner. I did not have an affair, nevertheless, I crossed the line during a regrettable period in my life.”

The singer said that “in certain instances it became inappropriate,” but that he had “addressed that and taken proactive steps to remedy this with my family.”

“My wife and my family is all I care about in this world,” he continued on Instagram. “To be this naive and stupid enough to risk the only thing that truly matters to me was the greatest mistake I could ever make. I will never make it again. I take full responsibility. We will get through it. And we will get through it together.”

Stroh said in a “Part 2" TikTok video Monday that she believed Levine’s marriage was over and that she thought he and Prinsloo were keeping things quiet to avoid bad media coverage.

“I was new to LA, so I just assumed that celebrities of that calibre that that’s just how it was,” she said. “That’s why I feel exploited, because he knew I believed everything that he said, because of my vulnerable position of being new to LA.”

Stroh accused Levine of manipulating her by DMing her directly from his verified Instagram account and “hiding in plain sight.”

Stroh said that she came forward only because she had “recklessly” sent some screengrabs to friends and that one so-called friend attempted to sell the story to a tabloid.

She said she realised what had happened the day before, when the tabloid reached out for comment, and went public herself in an attempt to kill whatever story the unnamed tabloid had.

“In retrospect, I wish that I would have questioned things more. I wish I hadn’t been so naive, but, you know, being naive is not an excuse for the role I played in this,” Stroh said.

“Again, in no way was I trying to gain sympathy, and I realise I am not the victim in this. I’m not the one who’s really getting hurt here. It’s Behati and her children, and for that I am so, so sorry.” – Los Angeles Times/Tribune News Service

Singer Adam Levine explains his reaction to a fan grabbing him in viral video: 'I was really startled' 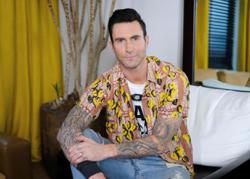