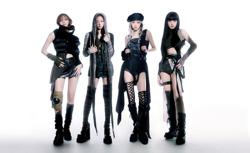 After a 22-month hiatus, K-pop girl group Blackpink returned to the music scene on Friday with Pink Venom, a prerelease single of the highly-anticipated second full-length album Born Pink out next month.

Ahead of the release of Pink Venom and the accompanying music video, the group held an online press conference to talk about new music and the long-awaited comeback. Pink Venom best expresses the group’s identity, said the singers.

“The title of our album is Born Pink, so we wanted the single to show our identity as much as possible,” Jennie said. “‘Pink’ and ‘venom’ feel contradictory, so it’s a good reflection of our style.”

“The single has a very new sound for us,” said Rose. “As soon as I heard the music, I wanted to record immediately. I am excited for our fans to hear it.”

According to Jisoo, the single combines the group’s trademark hip-hop style with geomungo – a traditional Korean string instrument. The lyrics and music video show fans the complex meaning behind Pink Venom, Jennie explained.

According to the group’s label YG Entertainment, Pink Venom is the most expensive Blackpink video. “There’s an impactful dance break at the end, and the set is just amazing,” Lisa added.

Blackpink is also set to make its US award show debut at the 2022 MTV Video Music Awards on Aug. 28. The band will be the first female K-pop act to perform at the annual event and the fourth among all girl groups, following TLC, Spice Girls and Fifth Harmony. When asked about performing at such a major music show, Lisa said, “I’m more excited than nervous.” Blackpink poses for photos during its global press conference for “Pink Venom” held online on Friday. – Photo: YG EntertainmentThe group will also embark on a massive world tour starting in October. The tour, entitled “Born Pink,” will begin in Seoul with a two-day concert on Oct. 15 and 16. The act will then head to North America, visiting cities such as Dallas, Houston, Atlanta, Hamilton, Chicago, Newark and Los Angeles.

The 36-date tour will continue throughout the year in Europe. Blackpink is scheduled to perform in London, Barcelona, Cologne, Paris, Berlin and Amsterdam. It will be the largest world tour by a K-pop girl group in history.

Jisoo said the group is ready to give everything for this tour. “Since it’s our first one in a very long time, we’d like to focus on our originality and include a lot of new songs. See you soon at the world tour!”

Blackpink also thanked its fans for their tremendous support since it debuted. “We’ve created so many great memories together and learned a lot from Blinks (the group’s fandom). Let’s stay together for a long time,” Jisoo said. – By Jie Ye-eun/The Korea Herald/Asia News Network