Eison Chai was the winner of the second season of the singing competition 'Super Idol'. Photo: Eison World/Facebook

According to a report by Focus Taiwan quoting local police, the singer had fallen from the Luzhou MRT station building at around 10am. He was pronounced dead on the spot.

The police say an investigation has been launched into the incident.

Chai emerged champion in the second season of the singing competition Super Idol. He also starred in Taiwanese dramas such as Rookie's Diary, I, My Brother and Feng Shui Family. He was married to Taiwanese actress Hitomi Wu.

Chai posted several selfies on his social media in the past week with sombre captions. His last entry was three days ago with the message: "Love is the hardest lesson in the world, but is also the easiest lesson. Love her and you will have eternity."

According to Singapore's Straits Times, in a live-streamed karaoke session on Sunday, he sang Andy Lau's classic song Forget Love Potion, among other melancholic songs.

According to news portal SET News, Chai had reportedly lost NT$5mil (RM742,500) in a restaurant venture in Ximending recently.

Taiwanese media reported that Wu had gone outstation for work and asked her friends to watch over Chai as he seemed down lately.

Chai and Wu registered their marriage in Taiwan in 2020 and had plans to hold a wedding banquet in Malaysia soon. 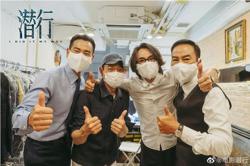