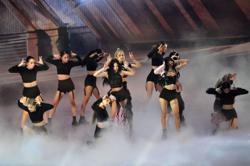 BTS debuted in 2013 and became a top K-pop group sweeping up domestic music awards in 2016 and shot to global fame the following year. Photo: AFP

The abrupt decision by global sensation BTS to pause working together as a group appears to have come from a need to restore its identity and take a break in order to explore the growth of individual members, exhausted after working for nine years without a rest.

The bandmates frankly shared the difficulties they have experienced so far as part of a top K-pop group and how physically drained they are on a YouTube video of them having dinner together Tuesday (June 14), reported Yonhap.

"Fans know us, and we also know them," Jimin said in the video.

"I feel exhausted partly because it's been so hard. So, I'm going to resolve it little by little."

Band leader RM agreed, saying: "The K-pop idol system doesn't give you time to mature. You don't have time to grow because you have to keep producing something."

Suga, the band's rapper, songwriter and producer, confided he has always been trying to push himself to create music since the band's debut in 2013 and things have changed a lot from seven to eight years ago.

"I have been squeezing my brain because I had many things to tell but lacked skills at that time but now I really don't have anything left to tell," he said.

Some say although the band said the pause would be temporary, it may follow the suit of Seo Tai-ji & Boys, a top idol group of the 1990s that abruptly retired at the peak of its career in 1996, citing the "pain of creation".

BTS debuted in 2013 and became a top K-pop group sweeping up domestic music awards in 2016 and shot to global fame the following year.

But songs that brought it to further worldwide stardom were its three English singles – Dynamite, Butter and Permission To Dance, which all came out after the global Covid-19 pandemic began in 2020.

These successes, however, appear to have caused an identity crisis among the members as individuals.

Bandmates said in the YouTube video that they didn't know what kind of group they were anymore as the pandemic disrupted their plans for music releases after its fourth full-length album, Map Of The Soul: 7, in February 2020. A woman takes a selfie with card board cut outs of K-pop group BTS members at a tourist information centre in Seoul on June 15, 2022. Photo: AFP

The group's agency Big Hit Music's policy not to allow individual activities also appears to have affected the decision to pause group activities.

With no chance to fully show their individual musical talents due to the policy, the members have released solo projects in a mixtape form so far, not in formal albums. RM said in the video the group will begin dropping formal solo albums, starting with J-Hope's projects.

"As people don't know who we are as individual BTS members, I think we should talk through music and performances as we are singers," he added.

The military duty facing the members as South Korean nationals also appears to have been as big as other factors in the decision.

In South Korea, all able-bodied men are required to serve in the military for about two years.

Jin, the oldest member of the group who was born in 1992, faces enlistment by December.

Discussions are under way at the National Assembly to revise a law to allow pop singers to substitute their military service for other alternative programmes. A woman walks past a mural depicting RM, a member of K-pop group BTS, in Goyang, northwest of Seoul, on June 15, 2022. Photo: AFP

But the reality is that the bill is unlikely to be passed at the parliament due to strong opposition from men in their 20s.

If they suspend performing as a group for the time being, members other than those who closely face the conscription are expected to focus on individual activities.

Following BTS' abrupt decision, lyrics of Yet To Come (The Most Beautiful Moment), a track from the Proof album, are coming into the spotlight again.

"Everyone, since some time ago/ calls us the best/ All those names I don't have an idea of what they are/ only feel heavy now," BTS said in the lyrics.

But the song closes by saying, "Back to square one after turning a full circle/ Back to one." – Bernama

BTS bids farewell to fans as it announces hiatus