An entertainment industry expert testified Monday that Amber Heard lost US$45mil to US$50mil (RM197mil to RM219mil) in endorsements and TV and film income over claims that she faked domestic violence allegations against ex-husband Johnny Depp.

Heard's team called the expert, Kathryn Arnold, as well as a psychiatrist and an orthopedic surgeon as the defamation trial began its sixth and final week.

Heard's lawyers were also expected to call Depp to the stand on Monday, but they ultimately decided they did not need his testimony.

Heard's side is seeking to prove that she suffered a severe career setback after Depp's lawyer, Adam Waldman, accused her of perpetrating an "abuse hoax" in 2020.

Arnold testified that Heard cannot find work in major studio projects because of the volume of online vitriol she continues to face.

"In the industry, they like her work," Arnold said. "But they can't work with her right now." Much of the trial has focused on often horrific allegations of violence. Photo: AFP

Arnold compared Heard's earnings to a series of other "comparable" actors – Jason Momoa, Ana De Armas, Gal Gadot, Zendaya and Chris Pine – to draw conclusions about what her career trajectory could have looked like, were it not for Waldman's statements.

Heard has claimed she had to "fight" to stay in the sequel, and has said that her role was significantly cut down.

Arnold testified that Heard should have been able to renegotiate her Aquaman 2 salary for US$4mil (RM17.5) or more, but could not because she had no leverage.

On cross-examination, Depp's attorney Wayne Dennison took issue with several of the comps, suggesting that the actors are more famous than Heard.

In quizzing her about other actors, Dennison got Arnold to reveal that she does not know who Patrick Wilson is. (He was a co-star in Aquaman.) 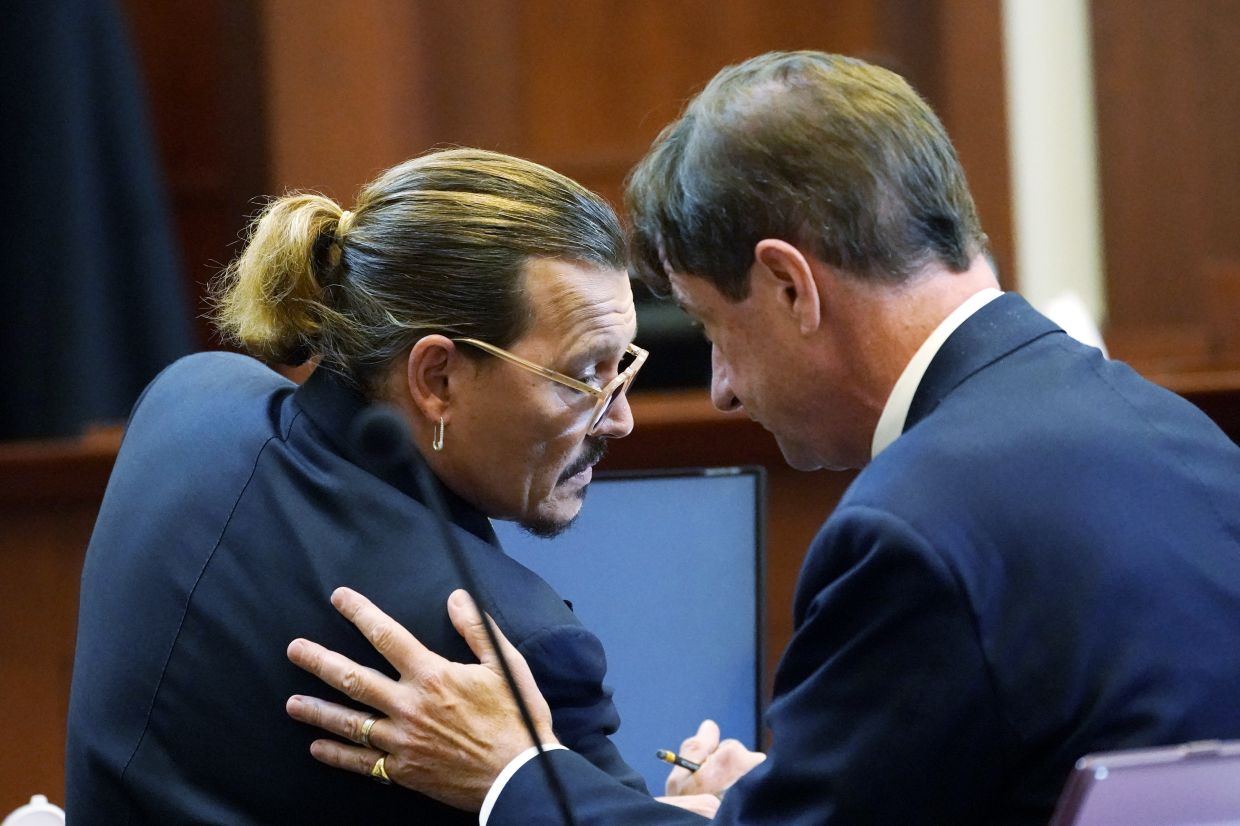 Johnny Depp did not return to the witness stand on Monday. Photo: AP

Dennison noted that the damage to Heard's career might have been due to negative press tied to the 2020 defamation trial in Britain.

Dennison also argued that Depp is not responsible for the negative social media campaign targeting Heard.

Depp's team is expected to call their own witnesses on Tuesday (May 24) and Wednesday to rebut Heard's claim.

They are also expected to play a deposition from Walter Hamada, the president of DC Films, who is expected to state that Heard did not suffer setbacks in the course of her casting in the sequel to Aquaman.

Depp sued Heard for US$50mil in 2019, alleging that she defamed him when she described herself as a "public figure representing domestic abuse" in a Washington Post op-ed.

Heard filed a defamation counterclaim after Waldman accused her of perpetrating a "hoax." Actor Johnny Depp accused Amber Heard of throwing a bottle of vodka that severed the middle finger on his right hand during a fight. Photo: Reuters

Much of the trial has focused on often horrific allegations of violence, as well as Depp's drug and alcohol use.

Depp has accused Heard of throwing a vodka bottle at him at a house in Australia, severing the tip of his right fingertip.

Heard's team called Richard Moore, an orthopedic surgeon, who testified that the injury was not consistent with Depp's account of it.

Heard has said that he likely severed it when he smashed a phone, and Moore testified that it would also have been consistent with pinching it in an accordion-style door.

Heard's lawyers also called a psychiatrist, David Spiegel, who testified that Depp's behaviour was consistent with substance abuse disorder and with being a perpetrator of intimate partner violence.

Spiegel also testified that Depp's memory appeared to have been damaged by substance abuse. – Reuters