Are Blackpink's Jennie and BTS's V together?

The photos show a side view of a man and woman in the front seats of a car; both of whom are wearing sunglasses.

The photos look to have originated from the Instagram account, dailyfashion-news. The Korean-language blog, which comments on fashion in popular culture, appeared to have posted the photos as Instagram stories, which disappear after 24 hours.

But the photos live on in social media, where netizens continue to share and re-post them, debating whether they really show the two K-pop stars.

Some netizens said that the photos could have been edited from a photo of 26-year-old V with his BTS bandmate, J-Hope. 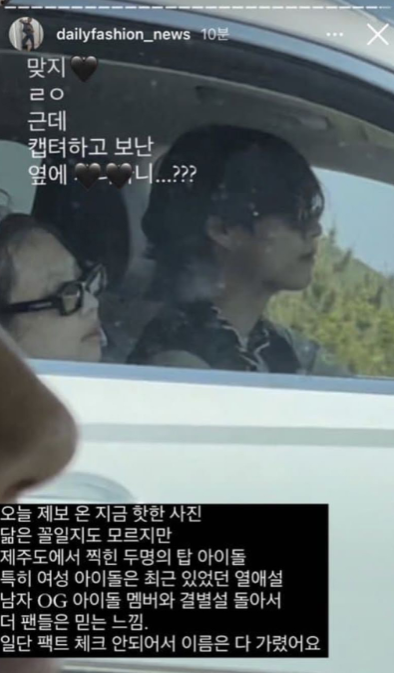 An alleged photo of Blackpink's Jennie and BTS's V together in a car visiting Jeju Island. Photo: Daily Fashion News/Instagram

But one Twitter user echoed the sentiments of many when they wrote, "People who said 'it's edited' are FOOLING themselves. These (pictures) couldn't look more real. You're in denial. Stop saying (the picture) is fake and be supportive instead. It's 2022, who cares if idols date."

Others suggested it was a ploy to distract attention from the bullying scandal that recently cropped up around Kim Garam, a member of the K-pop girl group Le Sserafim.

According to Korean entertainment news outlet Soompi, Jennie's agency, YG Entertainment, had no comment on the situation. "We have nothing to say. We will inform you if we have a different response to share."

This is not the first time that V and Jennie, 26, are suspected to be dating.

In December, sharp-eyed netizens noticed that V had followed Jennie on his newly created Instagram account. Even though he quickly unfollowed her, fans spammed Jennie's Instagram account, leaving angry comments such as "Leave V alone". – The Straits Times/Asia News Network