Actor Amber Heard listens in the courtroom during a defamation trial against her by her ex-husband, actor Johnny Depp. Photo: Reuters

Amber Heard completed her testimony on Tuesday (May 17) after four days on the witness stand, defending herself from accusations that she had faked her abuse claims against ex-husband Johnny Depp.

Heard maintained her composure as Depp's attorney, Camille Vasquez, accused her of lying and suggested that she was the true abuser.

Vasquez played audio recordings of arguments between the couple and read aloud love notes that Heard had written to Depp after the alleged assaults.

"You weren't scared of him at all, were you?" Vasquez asked at one point.

"This is a man who tried to kill me," Heard responded. "Of course it's scary. He's also my husband."

Heard is defending herself from Depp's US$50mil defamation suit.

Depp's team alleges that Heard destroyed his career with false allegations of physical and sexual assault. 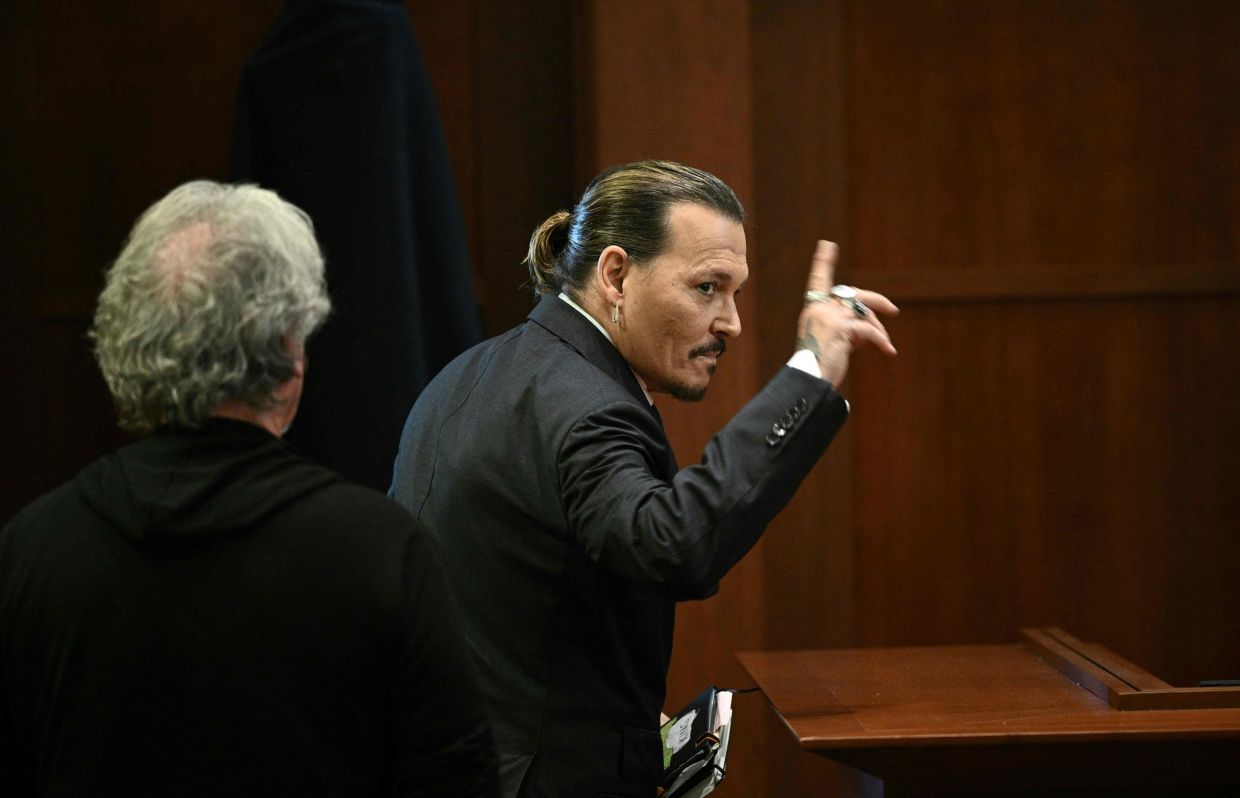 US actor Johnny Depp gestures as he departs the courtroom for a break at the Fairfax County Circuit Courthouse in Fairfax, Virginia, on May 17, 2022. Photo: AFP

Depp gave his own account of their relationship over the course of four days in April, and the outcome of the trial will hinge largely on which of the two the jury finds more credible.

Heard's side has presented therapy notes, photographs of Heard's bruised face and video of Depp screaming and smashing cabinets as they seek to corroborate her detailed and often emotional testimony.

In the most disturbing incident, Heard testified that Depp sexually assaulted her with a bottle during a vicious fight in Australia in March 2015.

Depp denies that and has accused Heard of throwing a bottle at him during the argument, which smashed and severed the tip of his middle finger.

In her cross-examination, Vasquez played audio of a conversation between the couple after the fight, in which Depp said that he had tried to escape the situation by locking himself in a bathroom, but that Heard had kept "coming to get me."

"Johnny is not an accurate historian of what happened during that period of time, I'll guarantee you," Heard said.

Heard has also said that Depp likely cut his own fingertip when he smashed a wall-mounted telephone.

"You're the one who assaulted someone with a bottle in Australia, isn't that right, Ms. Heard?" Vasquez asked.

Vasquez played a recording in which Heard admitted to "hitting" Depp. Heard testified that she sometimes had to use her body to defend herself.

Vasquez played a security camera video that showed Heard and actor James Franco taking an elevator to Heard's apartment on May 22, 2016.

That was one night after the final fight between Heard and Depp, in which Depp allegedly threw a phone at Heard's face and the police were called to the apartment.

Heard would file for divorce and seek a restraining order within the following days.

"You're taking him up to the penthouses, aren't you?" Vasquez asked.

"That's where I lived," Heard said. Heard has previously testified that Depp was jealous of Franco and had become accusatory after she filmed a love scene with him for the film The Adderall Diaries in 2014.

Depp has testified that he suspected Franco and Heard were having an affair. 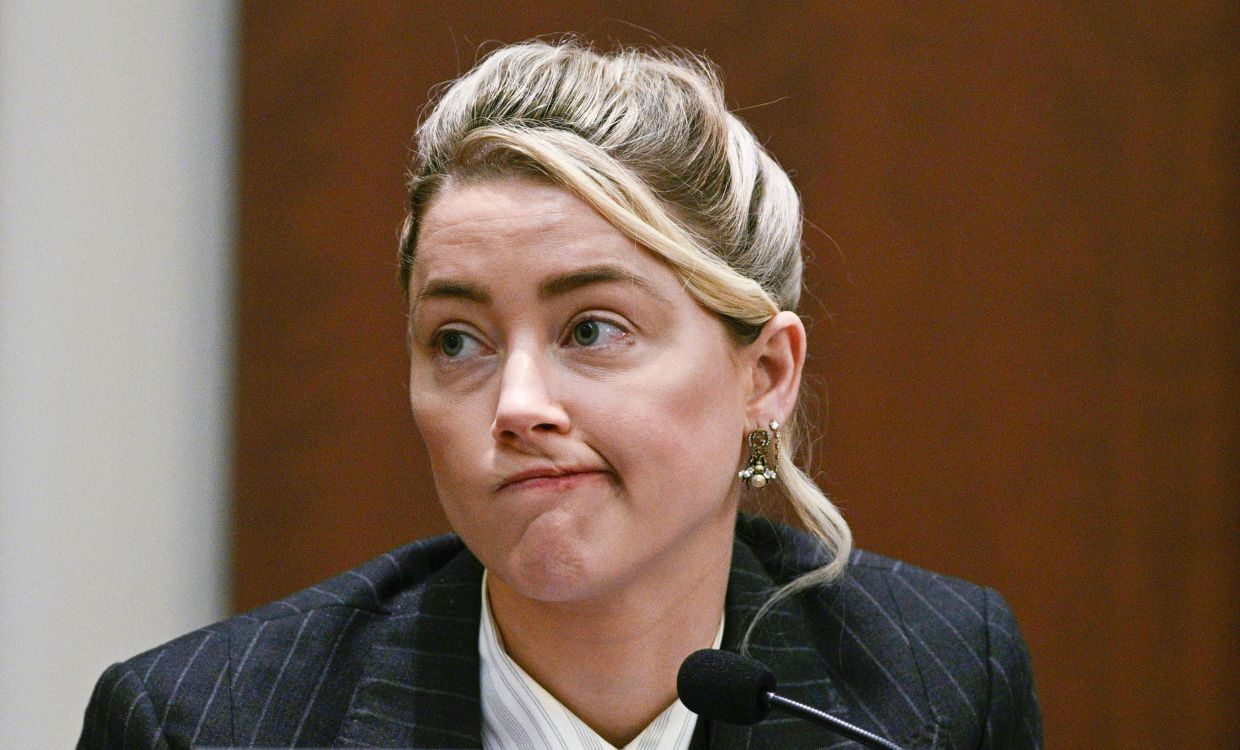 Vasquez also asked about Heard's role as Mera in Aquaman, suggesting that Depp had secured the role for her.

"Excuse me?" Heard said. "No, Ms. Vasquez, I got myself that role by auditioning."

Heard previously testified that she had suffered career damage as a result of the accusations that she is lying about the abuse.

She said that she had to "fight" to stay in Aquaman 2, which is due to be released next year, and that her role has been pared down.

"I don't know if I will even be in the final cut or how much I will be," she testified.

Early on Tuesday, Vasquez had a bailiff show jurors a knife that Heard had given Depp as a present early in their relationship.

She asked Heard why she would make such a gift to a man who could be drunk and violent.

"I wasn't worried he was going to stab me with it," she said.

Vasquez played audio of a fight in which Heard – through laughter – called Depp a "sellout" and a "washed-up piece of shit."

"I called him horrible ugly things," Heard said. "We spoke to each other in a really horrible way."

Heard was paid US$7mil in their divorce settlement, a portion of which she has donated to charity.

On redirect, Heard's attorney Elaine Bredehoft noted that Depp had made US$65mil in 2015, and that Heard would be entitled to half that, or US$32.5mil.

The trial is expected to wrap up on May 27, and then it will go to the jury for deliberation. – Reuters Amber Heard says 'jealous' Johnny Depp kicked her in the back, injured her nose