Who is behind the Ghostface mask this time around? Photos: Handout

Today, a film again entitled Scream – again starring Campbell and Cox – returns to breathe new life into the... you get the idea.

"Thank God we are working in a franchise, and in a universe, where it's OK for a movie to be wildly self-reflexive," co-director Tyler Gillett said.

"There were more instances of that meta experience than we can count when we were making the movie."

Just like in the 1996 original, characters in the new Scream spend much of the plot debating the tropes of horror movies in order to guess which one of them – female? Black? virgin? – will be killed off next.

They realise that the latest swathe of attacks in their bafflingly violent California hometown are targeting people related to the killers from 25 years before. A rare sighting of a Gen Z using the landline.

Handily, one character explains horror audiences' new fondness for "requels" – films that follow chronologically from previous movies, but reboot the franchise with younger characters related to the original cast.

"There are certain rules to surviving – believe me, I know," a returning David Arquette tells his younger, new co-stars.

It starts with a scene that evokes Drew Barrymore's infamous and shocking death in the original, when she ill-advisedly answered her landline, with the killer on the other end, before the opening credits have even rolled.In the new film's opener, a Gen-Z teen is so baffled to find that her parents' old landline still functions that she initially does not even answer.

"The disregard we all have for landlines... for us, it's fun," said co-director Matt Bettinelli-Olpin. Neve Campbell (left) and Courteney Cox are back, older and wiser.

"Placed at the beginning of the movie, it just lets you know we're aware of it, the movie's aware of it, we're going to move forward with that awareness together.

"One of the things that Scream does so well is it never underestimates its audience."

While the filmmakers wanted to make a "love letter" to the late Wes Craven – who directed all four previous Scream films – Gillett said the movie could never just be "pure nostalgia."

Unlike the original, which emerged when the slasher horror genre was floundering, the new Scream arrives in an era of critically acclaimed, socially aware arthouse horror from the likes of Jordan Peele.

Characters in the film pompously discuss their love for "elevated horror", referencing films like The Babadook and Hereditary as well as Peele's Get Out and Us.

"We're in the middle of a golden era. And so we're hoping that this movie introduces people to some of those movies that they aren't familiar with," said Bettinelli-Olpin. 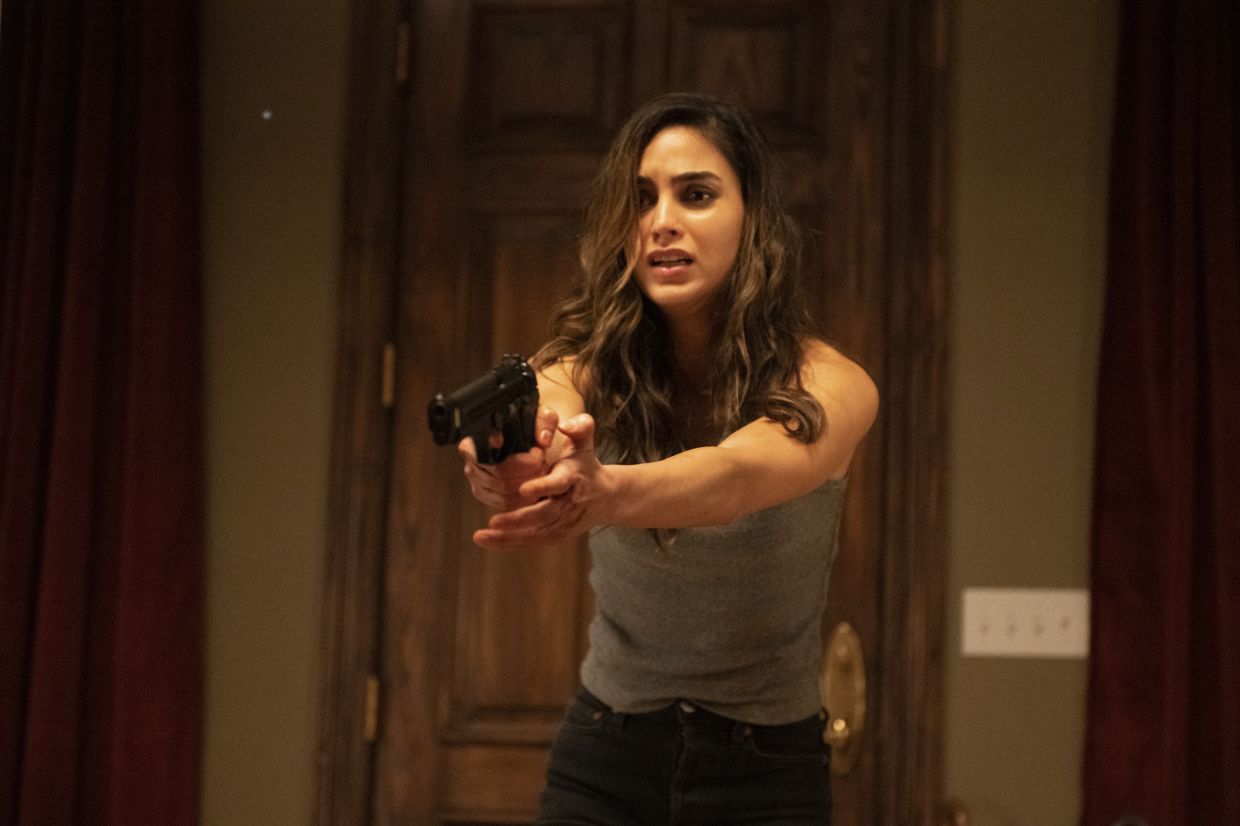 Melissa Barrera is one of the new cast members in 'Scream'.

"We're obviously playing with and poking fun at this idea of 'elevated horror'," added Gillett.

"Regardless of what you want to call it in order to feel good about watching a horror movie, for us it's all gravy. As long as people are excited about the stories... that's all upside to us."

One thing that has not changed is the Scream franchise's "whodunit" element, with the identity of the killer hidden behind a distinctive "Ghostface" mask.

Keeping the plot's twists from leaking was vital to the filmmakers. During the audition stages, actors were only shown scenes from the film's first two acts.

"Even when the cast members got there, we only gave them pages up until where their characters were," said executive producer Chad Villella, who worked on 2019 hit Ready Or Not with the two directors.

"They really embraced the secrecy of it all."

First reactions for Olpin and Gillett's Scream have arrived online, and it appears the fifth time is the charm for the long-running horror franchise.

Film journalists are calling the new entry "a fittingly loud, bloody good time at the movies" and the best Scream movie since Wes Craven's 1996 original.

The official Scream synopsis from Paramount Pictures reads: "Twenty-five years after a streak of brutal murders shocked the quiet town of Woodsboro, a new killer has donned the Ghostface mask and begins targetting a group of teenagers to resurrect secrets from the town's deadly past."

"(Directors Olpin and Gillett) actually wrote me a letter and they said they basically are directors because of [the Scream] films," Campbell previously told Variety.

"They are directors because of Wes Craven and they're really so excited to be a part of these films and what an honor it is to do them, and that they really want to do justice to Wes and honour his legacy."

Back to slash more victims.

Check out a handful of first reactions for the horror sequel.

"The new #Scream is a BLAST & my favorite since the original. There's some sharp writing here - a nice balance of well-crafted scares & amusing commentary on modern horror. It also pokes a lot of fun at itself, too, while remaining a bloody whodunnit & a damn good time. I'm a fan!" – Erik Davis (@ErikDavis)

"The new #Scream is the real deal. Such a well written script that keeps you guessing and wades into the treacherous waters of fandom in 2022. 'Scream' fans are going to love it." – Steven Weintraub (@colliderfrosty)

"I have seen the new #Scream and it's a winner! Yes it's bloody, but also feels loaded with love and reverence for the original and the fandom it amassed... and felt like it was talking to me (to a degree)." – Perri Nemiroff (@PNemiroff)

"Have finally seen Scream 2022 #Screammovie and it delivers... and then some. If this franchise means something to you – and it means so damn much to me – you will leave satisfied, moved, and wanting more. Oh yeah, it's scary (and funny) as hell." – Joel Meares (@joelmeares) – Agencies