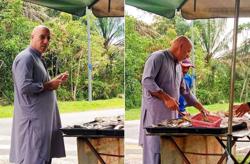 Vin Diesel continues to watch over the daughter of his Fast & Furious co-star and late friend Paul Walker.

Meadow Rain Walker took to Instagram on Oct 22 to share pictures of her wedding ceremony with actor Louis Thornton-Allan who had tied the knot early in the month. The actress posted several highlights from the memorable day, which took place in the Dominican Republic. Among those present were family and friends, including several celebrities like Diesel's other co-star Jordana Brewster.

One of the pictures confirmed that Diesel wasn't just a guest at the ceremony, but played an important part in it. The actor could be seen wearing a baby blue suit and sunglasses, walking his god-daughter down the aisle, in place of his late friend. Another video posted by the bride showed Diesel preparing for the walk and also later embracing the couple.

During an interview with People in June when Diesel was promoting Fast 9, the star touched on the bond he has with Meadow. "She's the first person on Father's Day to wish me Happy Father's Day, to see her with my children is one of the most beautiful things," said the 53-year-old.

"There are moments when I see her playing with (my daughter) Pauline and it hits me so deep because I can only imagine what my brother sees when he sees that," he added, referencing Paul, who died in a car crash back in 2013.