'Let me show you how to outrun a jeep.' Photos: UIP Malaysia

When it comes to the Fast & Furious franchise, I'm such a big fan of the gloriously outlandish, physics-defying films that I grade them on a rating system of their own.

In my eyes, 2011's Fast Five – the peak entry that catapulted the street-racing series to the next level – is a perfect, five-star film. Fast Five and the next two sequels, Fast & Furious 6 (2013) and Furious 7 (2015), represent the saga's gold standard.

When the dark and dismal Fate Of The Furious debuted in 2017, I was worried the series had finally run out of gas. After eight films, was this the end of the road for the Fast & Furious? Had Vin Diesel taken his campaign to get the franchise an Oscar too far?

The good news is Fast & Furious 9 remembers what the series is about: fun and family.

The supercharged sequel finds new lanes for the franchise to explore, cranking up the high-octane action, absurd stunts, beloved character returns and ridiculous fun that fans of the series have come to expect. 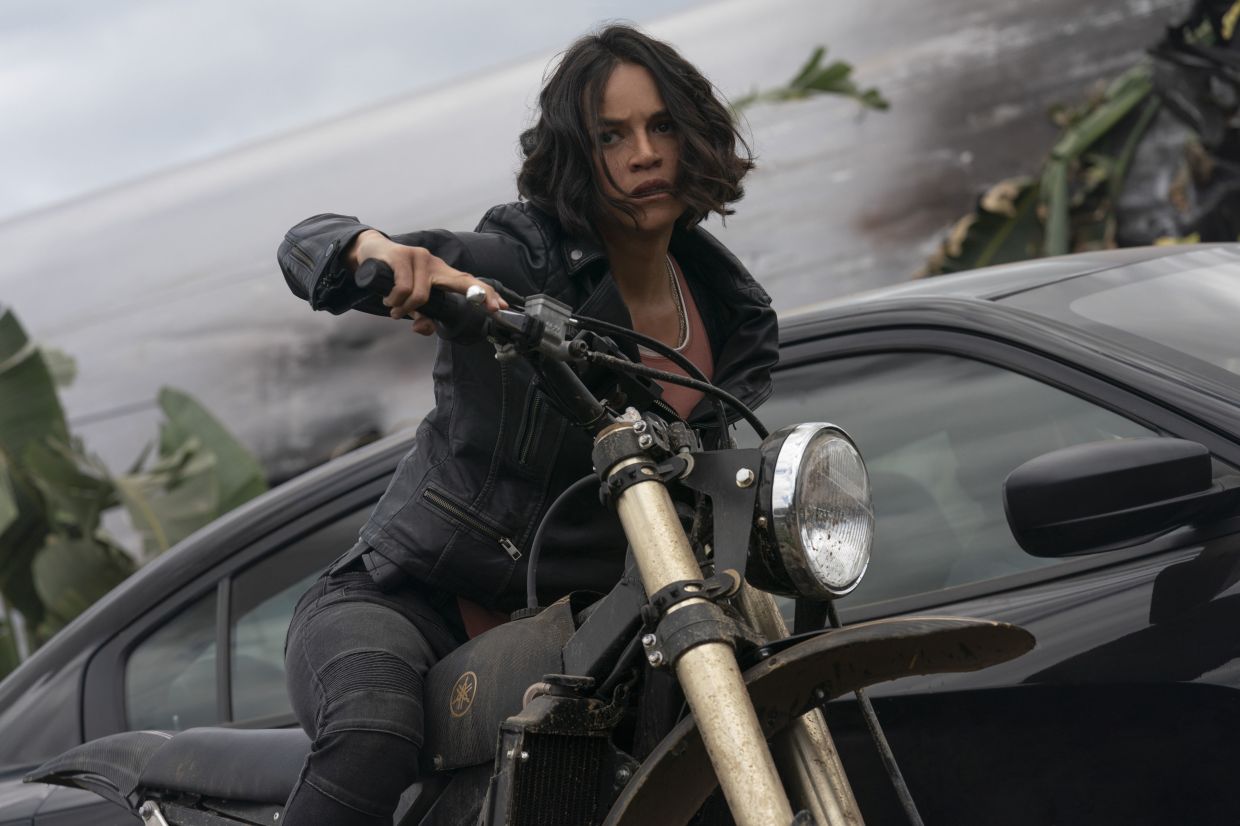 If you must know, she's air drying her hair.

In the ninth instalment of the franchise, street racer/master mechanic/heist planner/patriarch Dominic Toretto (Diesel) comes out of hiding to confront a new enemy: his estranged brother Jakob (John Cena).

Now a super spy, Jakob is involved in a plot to steal Ares, a device that can wreak havoc on any nation's computer weapons systems.

From the get-go, Fast And Furious 9 delivers the over-the-top, eye-popping action sequences that have become a hallmark of the series.

The latest instalment marks the return of director Justin Lin, who masterfully helmed the third, fourth, fifth and sixth entries. Lin's handiwork immediately comes through onscreen as he restores the series' flashy luster.

This was missing from F. Gary Gray's dull direction of Fate Of The Furious.

The thrilling sequel starts with a breathtaking Nascar race, setting the pace for the adrenaline-fuelled set pieces.

During a wild chase from military tanks, a new gadget cements Dom's status as the series' Batman.

The sequel gets a lot of mileage out of a giant magnet, which proves incredibly useful – and downright entertaining.

And the stunts are literally out of this world as the franchise finally goes into space. The gravity-defying sequence gives Gibson and Ludacris some of their best moments in the franchise, drawing laughs every time the pair is onscreen.

Fast And Furious 9 successfully pushes the boundaries on what the series can accomplish. 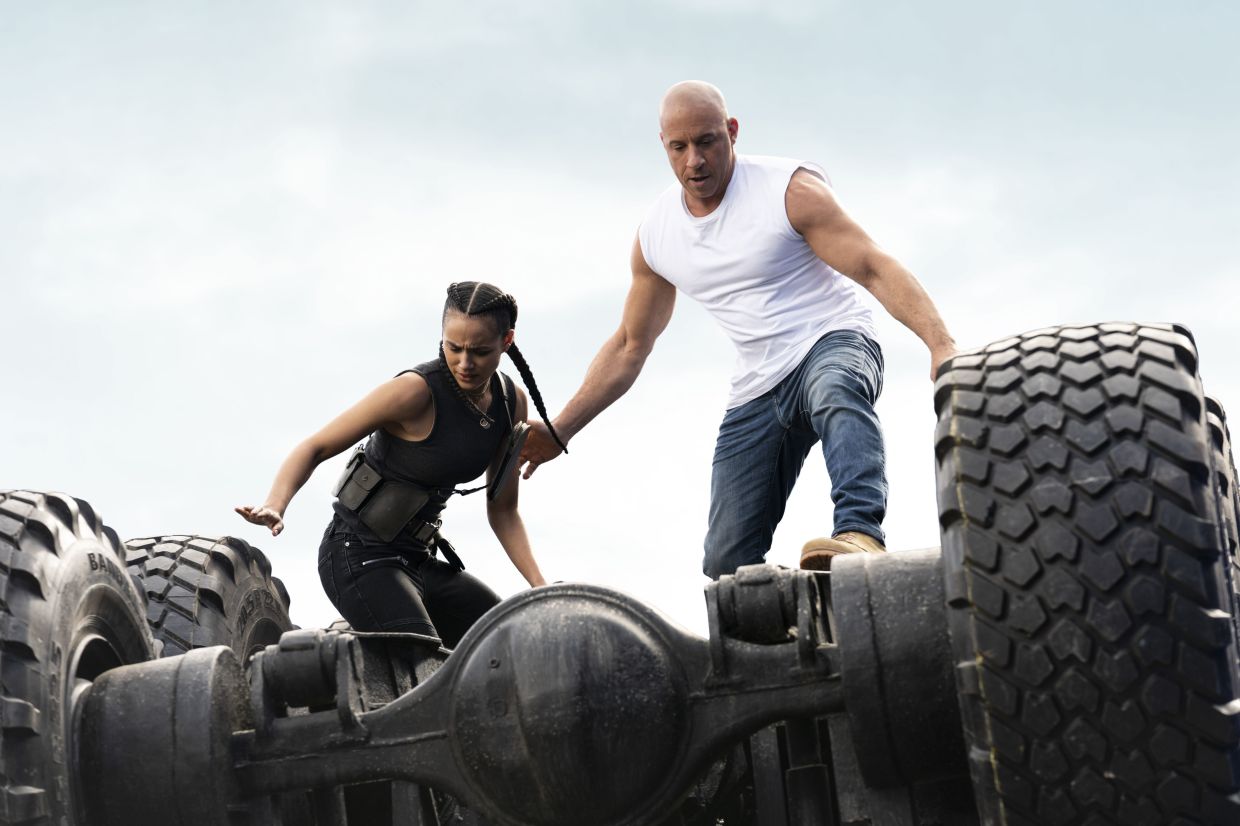 When driving isn't the only thing you can do with a monster truck.

While Fate Of The Furious made the mistake of separating its core characters, Fast And Furious 9 brings them together right away – and resurrects a fan favourite.

The Fast & Furious films are known for bringing back dead characters, and when they do, they always make it work.

This time, it meets the challenge of bringing Han (Sung Kang) back into the fold. When I saw my favourite character in the franchise was returning after a two-film absence, I was ecstatic.

The film explains why the snack-loving Han's death wasn't all that final, and for the most part, the explanation works.

Kang's sensitive yet cool jack of all trades fits in seamlessly with the crew, adding to the group's delightful chemistry. The film hints we'll be seeing more "Justice for Han."

Fast And Furious 9 also gives its female characters plenty of screen time – and with each other, addressing a criticism Rodriguez has levied at the films.

After sitting out Fate Of The Furious, Jordana Brewster returns as Dom's sister, Mia.

In one scene, Mia and Letty eat dinner and check in with each other. It's a lovely, quiet moment in which we see two female characters simply talking, which is rare for the series.

That's not to say Letty and Mia don't get in on the action, which they do – and it's totally awesome.

The two show they can easily fend for themselves during an all-out brawl. For Rodriguez, this films marks the latest example of her physical prowess, having taken on Gia Carano and Ronda Rhousey in previous instalments.

The film also gives its other female characters standout moments.

Her driving scene is exciting and hilarious, allowing the actress to blossom out of her element.

The sequel also introduces a new character, Elle (Anna Sawai), whose mastery of firearms is quite helpful.

One of my favourite moments features the return of Queenie Shaw (the fantastic Helen Mirren), who shows off her driving skills during a short chase. If the franchise could bring Mirren back for a chase scene in the next (and last) two movies, that would make me happy.

In a departure from past instalments, the film weaves in flashbacks of Dom and Jakob. The technique effectively explains the wedge between the two brothers.

As Dom's younger self, Vinnie Bennett channels Diesel's mannerisms, bearing a striking resemblance to the superstar.

As the younger Jakob, Finn Cole might not have Cena's chiseled looks, but the actor does a good job in conveying the character's chip on his shoulder.

The Nascar scenes also bring the great Michael Rooker to the franchise. The casting is a clever callback to 1990's Days of Thunder, where Rooker plays Cup champion Rowdy Burns, Tom Cruise's rival. 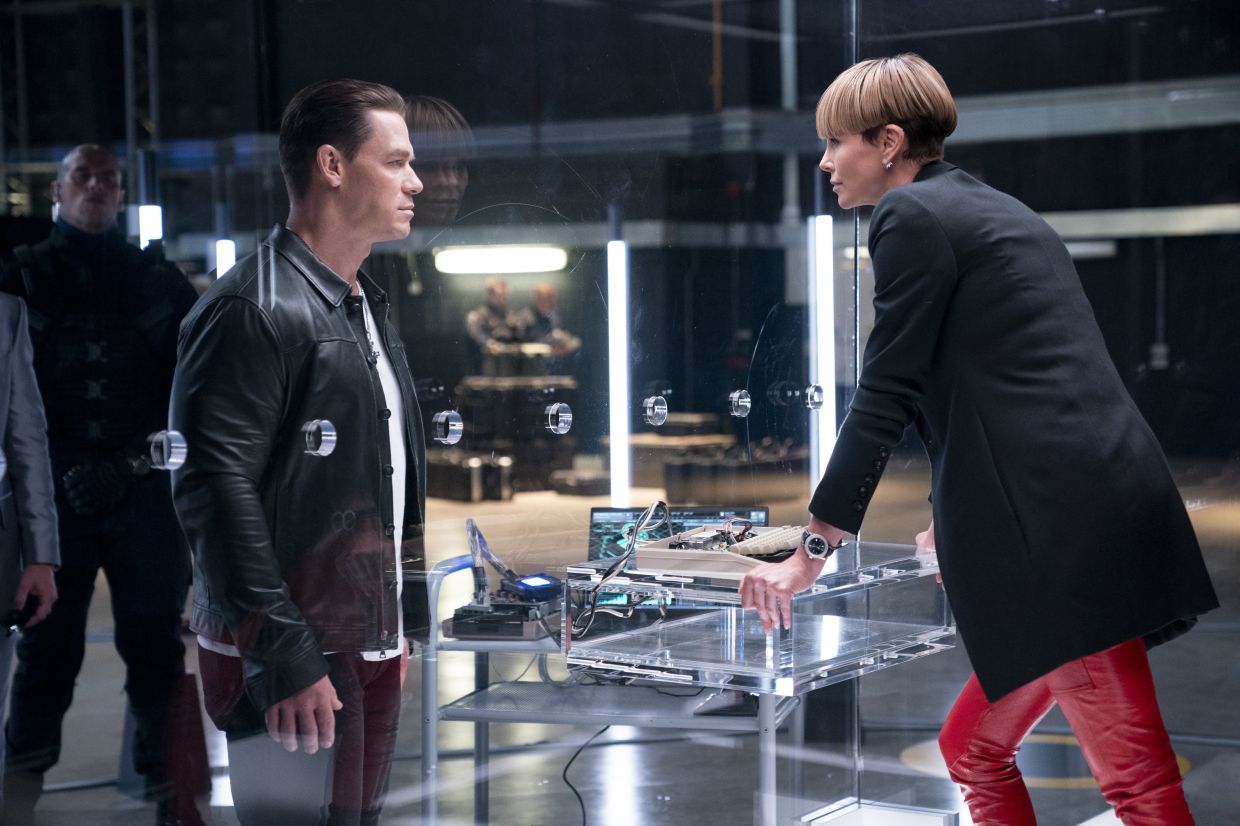 'But I was supposed to wear the red pants.'

As enjoyable as Fast And Furious 9 is, it's not without its flaws. The blockbuster is nearly two-and-a-half hours, which is long (prepare for at least one bathroom break).

Positioned as the film's villain, Cena feels like the odd man out. Most of his scenes are separate from those with the main cast, so he's largely unable to share in the group camaraderie.

His action time is limited onscreen, and he doesn't get to showcase his flair for comedy. You can't help but feel Cena is being underused here so he can be used more in future films.

Speaking of villains, the franchise still hasn't figured out how to use Charlize Theron's Cipher. The Fate Of The Furious baddie returns in the latest film, but as a secondary villain, she's barely in the film.

Like a Nascar race, Fast and Furious 9 has plenty of turns before reaching the finish line, hitting its marks as a welcome return to form.

The film mostly corrects the mistakes of Fate Of The Furious, leaving the eighth entry in the rear-view mirror as it follows closely on the bumper of the best three films in the series.

With its outrageous stunts and ever-growing family of characters, Fast And Furious 9 proves the franchise has a lot left in its tank.

With just two more films to go, the road ahead looks bright once again for the franchise. – Rebecca Kivak/The Times-Tribune/Tribune News Service

The latest instalment gets back on track and remembers what the series is about: fun and family.