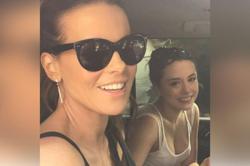 Even before the pandemic, Kate Yeung had been doing part-time work as a florist and waitress. Kate Yueng/Instagram

Hong Kong actress Kate Yeung, who has not appeared in public much over the past year, has been working as a security guard at a university.

In an interview with Hong Kong tabloid Apple Daily, the 36-year-old revealed that she had taken on the full-time role for a year, due to acting jobs drying up during the Covid-19 pandemic.

Even before that, she had been doing part-time work as a florist and waitress.

"I'm really grateful for this past year," she said. "Because I entered this industry at the age of 16, I actually don't know much about the world outside of acting."

Working in various jobs has given her much-needed experience, she added.

"A good actor requires experience, so I have always had the idea to try working in different industries for the experience. But my capabilities and my time were limited, as I have only one body."

She said the job allowed her to get out of the house and to stop dwelling on Covid-19 news. She also got to know people from all walks of life that has enriched her. She added that she is sad to leave her work at the end of this month (June).

Yeung, who was nominated for a Golden Horse award for best supporting actress for the movie 20 30 40 in 2004, has a new acting project coming up and rehearsals start next month.

"I have never left the entertainment industry and I will not give up because I really like acting too much," she said. – The Straits Times/Asia News Network