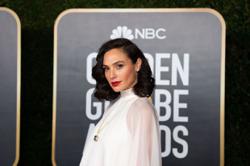 Princess Diana and Diana Prince have more in common, as it turns out, than a flip-flopped name.

“I remember watching the documentary about Princess Diana,” she told Vanity Fair for a pre-Oscars event the mag hosted. “And there was a part where they say that she was full of compassion and she always cared for the people. And that was like, Ding-ding-ding-ding. That should be the Wonder Woman that we have.”

Sure, she can lasso bad guys, deflect bullets and glide through the air, but Wonder Woman also had to have something deeper, the star said.

“How can you connect to a goddess that’s super strong and has it all and (is) super perfect?” Gadot said, according to People. “I wanted to show her vulnerabilities and heart. I wanted to portray a character that people will be inspired by but also be able to relate to.”

Diana, Princess of Wales, was married to Prince Charles from 1981 to 1996 and died in a 1997 car crash in Paris. She was known for her activism, as well as her style.