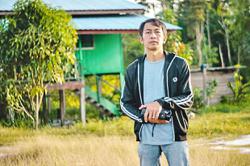 Longhouse Films founder and CEO Chiew (centre) has worked as a producer for 23 years in China. Photo: Handout

After amassing some 20 years of experience as a producer in China, Sarawak native Jon Chiew has returned to lend his expertise to the Malaysian film industry.

Chiew set up Longhouse Film, a film investment and production company, in 2019 with the hopes of injecting his international experience in the local film scene.

The founder and CEO was a producer on the hit 2018 Chinese film, Hello Mr Billionaire, which made RM1.55bil in the box office, and some 20 other films.

Among the exciting projects Longhouse Films is a part of includes action film Bakara, helmed by Paskal’s Adrian Teh, which will begin filming in June. The film is set to hit theatres in the United States and China upon completion in 2022.

Longhouse Films is also involved in the investment and production of Ada Hutan, the directorial debut of Paskal star Hairul Azreen, The Assistant featuring Syamsul Yusof and local sitcom My Ofis, all slated for release in 2021.

Meanwhile, its international projects include distributing Monkey King: A Hero’s Journey To The West in May this year.

Longhouse Films will also have a part to play in Hello Mr Actor, the sequel of Hello Mr Billionaire, which is scheduled for a 2022 release. Malaysian singer Froya and Japanese group Uqiyo team up for latest single
Dwayne 'The Rock' Johnson shares long list of career injuries
Korean artiste Rain’s new EP features many collaborations
TV show explores a future where a DNA test can help you find the perfect partner
Fans of BTS’ Suga mark his birthday by putting solo project on top of chart
Celebrity doctor, Dr Oz, helped revive man whose heart stopped at US airport
Popular 1980s video game ‘Frogger’ to be made into competition series
'Raya And The Last Dragon' review: A Disney princess worthy of celebration
What movies can you watch once cinemas have reopened?
'Degrassi' actor Jahmil French dead at 29