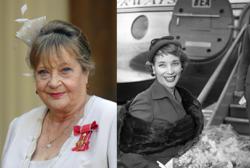 The lack of interaction between Hong Kong actor Vincent Wong and his wife, actress Yoyo Chen, at the TVB Anniversary Awards has added more fuel to speculation that their marriage is on the rocks.

Wong, 37, was crowned Best Actor for his role as a blind lawyer in the legal drama Legal Mavericks 2020 on Jan 10, but his wife was expressionless when the camera panned to her while he was thanking her on stage.

Chen, 39, gave Wong a quick hug when all the actors went on stage later, but she declined to take a photo with him backstage and told the Hong Kong media that she was "distracted" during his acceptance speech.

The actress, who was nominated for Best Supporting Actress on Sunday, returned home without her husband. Her good friend, actress Priscilla Wong and Wong's husband, actor Edwin Siu, gave her a lift.

Meanwhile, Vincent Wong was seen outside TVB City celebrating his win with close to 20 fans and taking photos with them.

Both Chen and Wong also made no mention of each other on their subsequent posts on social media.

Chen's expressionless moment trended in Hong Kong after the ceremony. Some netizens said that was the "most exciting" moment on Sunday night and that she was the "real best actress" on Sunday, while others praised her for her magnanimity in congratulating her husband.

Hong Kong actor Chapman To parodied the moment by posting a photo of him expressionless on social media.

Wong and Chen married in 2011 and they have an eight-year-old daughter.

However, there have been several rumours in recent years, with Wong linked to actresses such as Fala Chen, Jacqueline Wong and Kaman Kong.

He was recently linked to actress Sisley Choi, his co-star in Legal Mavericks 2020 who won Best Actress on Sunday. They have both denied the rumour. – The Straits Times/Asia News Network