Actor-director George Clooney (left) with actress Tiffany Boone on the set of 'The Midnight Sky'. For his latest effort, Clooney presents a gorgeous and heartwarming film. Photos: Netflix

Believe it or not, George Clooney will be turning 60 soon.

It’s a fact that he brings up voluntarily during a roundtable Zoom interview with Malaysian and Indonesian journalists for The Midnight Sky, his latest feature which he directs and stars in.

At this video conference, the American actor looks as sharp and handsome as he always has as Hollywood’s leading man. Or in other words, not at all like a person we’d think is 59 years old.

Wearing a short-sleeved white shirt, Clooney is friendly and casual from the get-go despite the interview method that has become the norm this year.

However, he does end the 20-minute chat with: “Next time, we do it in person.”

As to why he brings up his age at all, well, he plays a 78-year-old character in the Netflix film.

And Clooney does this quite brilliantly – one of many spots of brilliance showcased throughout the sci-fi epic that could very well receive multiple Oscar nominations next year.

It centres on a lone scientist in the Arctic making an arduous journey across the unforgiving landscape in order to make contact with a crew of astronauts on board a spacecraft that’s returning to a ruined Earth and its dying inhabitants.

Clooney – who rose to prominence through the TV series ER in the early 1990s – says frankly: “Look, if I didn’t have to play old people, I’d much rather play young people. But unfortunately, I’m getting old. So, I have to look at the other parts.”

In The Midnight Sky, Clooney definitely looks the part of Augustine Lofthouse – an ailing astronomer who is all alone at a research facility in the Arctic except for a little girl who’s left behind when the facility was evacuated.

For the role, the Oscar winner grew a long beard and lost more than 11kg.

The versatile actor says preparing to play the character isn’t all that hard for him as that’s what he does for a living. After all, he has presented many layered characters in films like Syriana, Three Kings, Solaris, Michael Clayton and Up In The Air. However, he confesses there was a tiny hitch in the process this time around.

The father to three-year-old twins shares: “The trickiest part of this was, I had to do it (lose the weight) when we were in Italy over the summer. And that’s just cruel, you know.

“The whole family is pounding pasta, and I’m eating like a bowl of lentil soup. Yeah, it’s awful.” 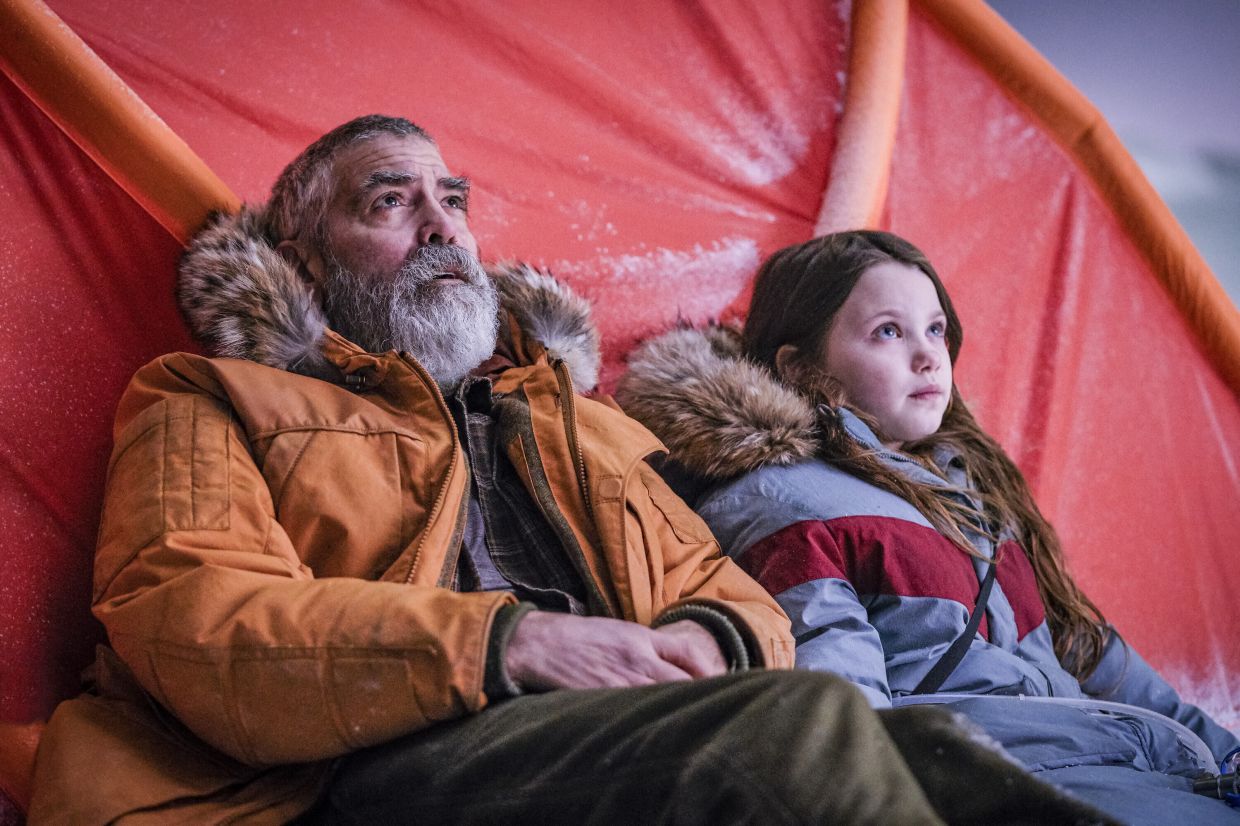 George Clooney and Caoilinn Springall filmed their scenes in Iceland, which was no easy task.

The Midnight Sky is Clooney’s seventh feature as a director, after making his directorial debut with the 2002 film Confessions Of A Dangerous Mind.

Since then, he’s helmed the Best Picture Oscar nominee Good Night, And Good Luck (2005), The Ides Of March (2011) and TV’s Catch-22 (2019). All the while continuing to act for Hollywood’s top directors like Steven Soderbergh, the Coen brothers and Alfonso Cuaron, also picking up the craft from them.

But The Midnight Sky may be Clooney’s toughest endeavour yet working behind the camera.

Except for one crucial scene involving water and snowmobile which were shot in a giant stage, all other outdoor scenes set at the Arctic were filmed in Iceland in October where the daylight hours were short, the temperature was -4°C and the wind was blowing at 110km/h at times.

It was so brutal that Clooney’s eyelids would freeze shut in just 45 seconds when he’s not wearing goggles for a scene.

“They’d have to take me by my hand into a SUV and with a blow dryer melt my eyelashes so I could open my eyes and go back out and shoot.”

And the icicles you see on his beard and eyebrows in the film are real, no special effects required.

All this basically means the crew could only shoot for a minute or less in those sequences. The ice on George Clooney's beard is all real!

Clooney tells StarLifestyle: “Shooting in Iceland was hard as you can imagine. Easy as an actor in a weird way because the elements help you, you know, bad weather is kind of what you need, it helps you react. If we didn’t have bad weather, you have to fake it in a way. And that doesn’t work.

“But directing, it is not so easy. We shot this in 65mm. So, it’s a big heavy camera and it’s handheld. So, we’ve got three guys holding it and the wind is coming in. And, this wasn’t a snowstorm we were in, these are sort of little mini-tornadoes that are coming through.

“So, you’d see this perfectly blue sky, and you’d see this wall of white coming towards you and everybody was tied to everybody and they go ‘OK, ready, get ready’ and then ‘boom!’, it would just hit and knock us on our ass. I have to say, as an actor, it was fantastic.

“As a director, it was a pain. Also, you know, it gets light at 11.30 in the morning and dark at three. So, we don’t have any time either. And the kid can only work five hours. And, you know, it takes a long time to get out on that glacier.

“So, it was time-consuming and tedious to do. But it was fun, ” he elaborates lengthily on the challenges shooting in Iceland, ending the answer with a grin. The interior of Aether was built as a three-story construction at London’s Shepperton Studios.

The story of The Midnight Sky, adapted from the novel Good Morning, Midnight, by Lily Brooks-Dalton, is split between the frozen landscape of the Arctic where Clooney’s character is, and on board the spacecraft Aether featuring actors Felicity Jones, David Oyewolo, Demian Bichir, Kyle Chandler and Tiffany Boone.

It’s a cross between The Revenant and Gravity, if you will.

There is also flashback scenes to when Augustine was a young man, played by Ethan Peck (the grandson of Gregory Peck).

But if you put aside the scale of the film – for example, the interior of Aether was built as a three-story construction at London’s Shepperton Studios – and its post-apocalyptic setting, The Midnight Sky is very much grounded, centring on the characters’ lives and the decisions they’ve made and are making.

Clooney explains: “The trick Alfonso used to talk to me about when we were doing Gravity was that, that you’re still telling small stories in a big canvas.

“So as long as you focus in on that, and remember what we have to serve are the characters in the stories, as if it was a play, then you can open it up.

“And, you know, I took a bunch of lines out because I’m working with an actress whose character doesn’t speak, and silence is an incredibly powerful tool if you use it well, particularly with the right kind of score.

“I called Alexander Desplat, the composer, and I said, ‘the score is going to be a character in this movie.’ And Alexander is the best in the business.” Actress Felicity Jones was pregnant when filming The Midnight Sky. Clooney decided to incorporate that fact into the story.

No doubt, it’s the relationship between the old man and the little girl that ultimately captures the audiences.

Newcomer Caoilinn Springall from Ireland was only six years old when the film was shot, and she is phenomenal.

Clooney, naturally, describes her as brilliant. “We looked at about 200 little girls who were all very good, but there was something about this one, you know.

“She listened and she has these beautiful eyes. You know, actors, oftentimes, when we do it badly, it’s because we’re not listening.

‘And she didn’t have any lines – she had one line in the whole movie – but it was important for her to be alive and she was spectacular.”

Utilising all these personal stories in The Midnight Sky, Clooney has weaved a movie about hope against what seems to be a hopeless situation.

“For me, yes, this movie is about regret, but it’s also about redemption.

“That redemption is, I think, the most important element to this film. If we’re going to make the argument that, ‘Is it all worth it; this fight to survive, everything we’re fighting now, a pandemic, what we fought for in our lifetimes, is it worth it?’

“And if the answer is yes, then it has to be hopeful at the end. And that to me, was the most important part. That, there had to be some redemption.” 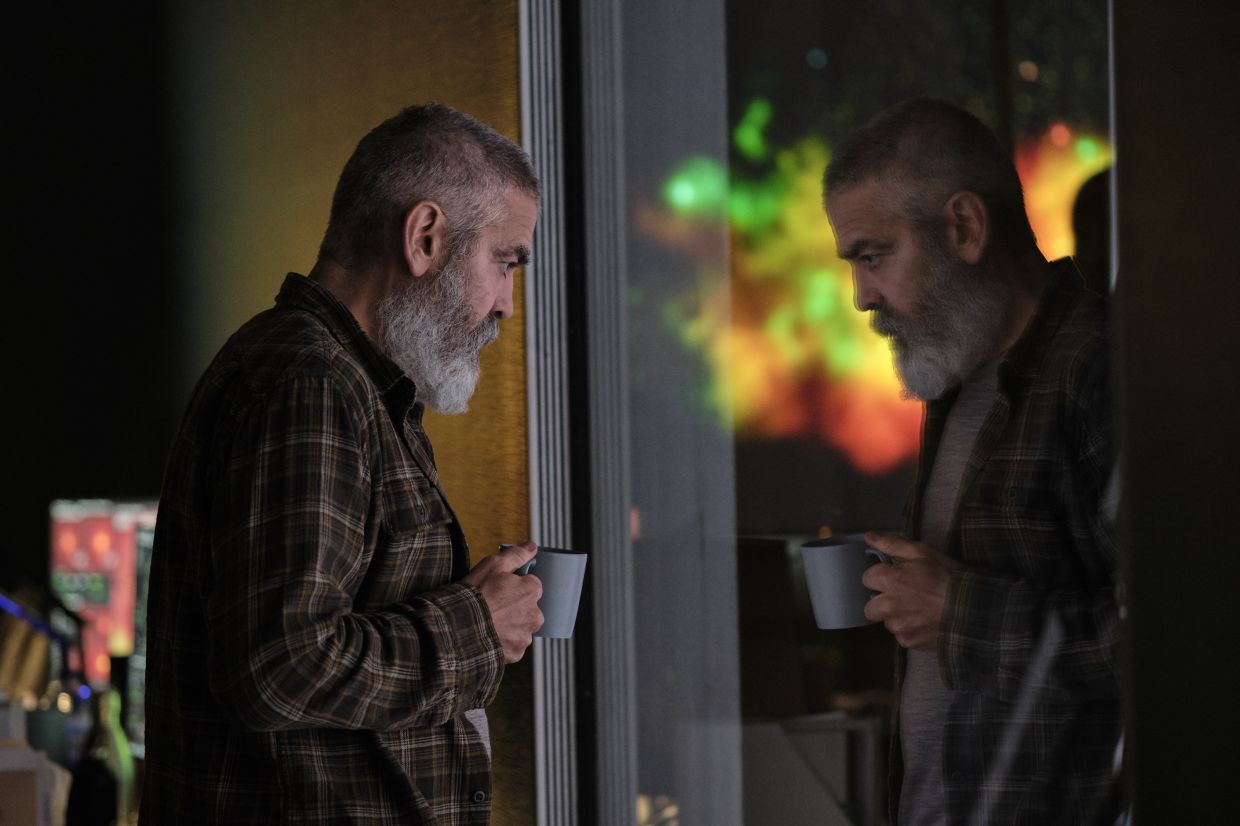 Once he finished filming his scenes in Iceland, George Clooney didn't waste a minute to shave his beard off.

Patrick Dempsey's McDreamy will be back on 'Grey's Anatomy'... again

EXCLUSIVE: Irish singer JC Stewart gave up his family’s grocery business to be a musician