Emily in beret. This series is full of cliches. Photos: Handout

One of Netflix's current hit shows is Emily In Paris, starring Lily Collins as an American millennial who gets a transfer to the marketing office in the City of Lights where her sole responsibility is to bring some American perspective to her French colleagues.

So, if it is a hit show, why are the reviews so divisive? Some people love the 10-episode series while others find it an abomination.

With so many comments and memes on social media, as well as chatter among my circle of TV-loving fans, I decided to give Emily In Paris a go. I need to see for myself what the hullabaloo was all about. The series currently ranks No.1 on the Malaysian Netflix streaming site.

Being a fan of Sex And The City and Younger, two series that were created by Darren Star who's also responsible for Emily In Paris, his latest must also have some merit. Right?

Truth be told, at 20-something minutes per episode, Emily In Paris makes for an easy watch and is pure fluff. An intelligent show it is not, but good for pure escapism, and we all need that at these depressing times.

However, I can see why there are so many detractors. Emily is young, somewhat dumb (please don't say she's the new Carrie Bradshaw... Emily lacks the complexity) and entitled. Emily has no problems making friends in a foreign country.

On the show, everything goes her way and she doesn't struggle one bit. Can't speak French? No worries, the French will pivot and speak English for you. Feeling lonely and have no friends? Poof, here's a friendly stranger at a park who will soon be your BFF. Plumbing issues at home? No problem. Your hot neighbour will let you use his shower.

So, the show is entertaining and offers some giggles here and laughters there, but it has more going against it than for it.

The characters are not fleshed out, and the dialogue is not memorable. There's hardly any sparks between the two leads (Collins and French actor Lucas Bravo), and for a show that's touted to be fashionable and set against the fashion capital of the world, no outfit stands out.

(Emmy winner Patricia Field who oversaw costumes for Sex And The City series and movies, worked on Emily In Paris.)

To use an analogy from Instagram – Emily's social media of choice – this comedy is akin to an IG post of an influencer: filtered to the max, shallow to the core and utterly forgettable.

What other TV critics think of Emily In Paris

This show is the most basic bitch version of Paris you could possibly imagine – it's the Paris of a bargain bin college dorm room poster – but it wears it proudly. It asks: What if you got the opportunity to go work in France despite speaking no French, became an Instagram influencer, and had every hot Parisian man fall head over heels in love with you? It's ridiculous! It's also addictive. – Esther Zuckerman, Thrillist

Despite the beauty Paris has to offer, the show is built on an ugly and insidious premise. Everything is content. Nothing is real unless extruded into a social media algorithm... Almost countless times through the first three episodes, Emily and the other characters demonstrate a complete disregard for reality in preference for the platforms of social media. Paris isn’t Paris but, as Emily tells her Chicagoan boyfriend while Facetiming as she walks, “The entire city looks like Ratatouille.” Meaning that the character’s entire frame of reference is itself a cartoonish recreation, a copy of a copy of a copy. – Joshua David Stein, Eater More fizzle than sizzle between the two leads.

Collins makes the struggle to be oneself compelling – she’s an inherently winsome performer who has never been quite as well used as she is here. She even makes Emily’s unlikable traits into demonstrations of will. Her steeliness brushes up appealingly against the show’s more confectionary aspects. Through Emily’s eyes, we see a Paris that’s deliciously itself; the city also brings out the strength of her character, proof of a show that’s significantly better written than it strictly needed to be in order to please the audience. – Daniel D'Addario, Variety

Emily In Paris is equally shallow and ingratiating. It seeks in every way not to offend, to whisk viewers away to a 10-episode Parisian reverie where troubles melt like lemon drops way above the Mansard rooftops. Why, then, is this comically inane show currently the third most-watched thing on Netflix in America? The show has little of substance to say about the knotty complications of how young people live and work today. A throwaway incorporation of social media is where its insight begins and ends, as we witness Emily become an influencer just as easily as she does everything else. While we all know people with only tens of followers who still spend hours staging the “perfect” selfie, Emily snaps the most banal image possible, and her likes and new fans ratchet upward faster than the national debt. – Maria Fontoura, Rolling Stone

Emily In Paris portrays Emily – and therefore Americans – as arrogant (or perhaps ignorant), unnecessarily loud, overly ambitious, and self-centred. And while that is certainly the view many around the world have of Americans (and is true of plenty of Americans as well), the series does little to attempt to change that perception. In fact, you can argue it actually goes out of its way to say that Emily's so good at her job because she's American and that her new firm needs her and her American point of view to survive, which feels woefully out of touch with reality, especially because the firm isn't specifically marketing to American consumers. While this is misguided, where this American-centric point of view really becomes an issue is Emily's disinterest in her new home. When she first arrives in Paris, she speaks no French, and by the end of the first season, that hasn't changed much. – Kaitlin Thomas, TV Guide

Emily In Paris is an aggressively frivolous show. The new series from creator Darren Star is a travelogue disguised as a comedy starring Lily Collins, who flounces around the City of Lights in a series of increasingly ridiculous midriff-baring ensembles. In any other year, I would’ve made it about 13 minutes into the pilot before slamming my laptop shut with a disdainful harrumph. In 2020, I devoured the entire first season like a tray of petits fours and remain desperately hungry for more. Kristen Baldwin, Entertainment Weekly 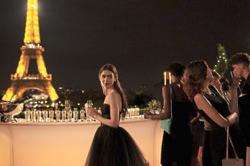