Dolly Parton may pose for 'Playboy' to mark her 75th birthday 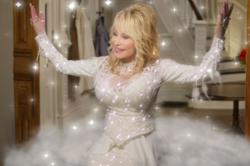 Dolly Parton was the first Country singer to appear on the cover of 'Playboy' magazine in 1978. Photo: Sony Music

Back in March when Dolly Parton went on a TV interview in Australia, she was asked if she would retire from showbiz any time soon.

The Country legend replied in the 60 Minute interview: "I don't plan to retire, I just turned 74! I plan to be on the cover of Playboy magazine again. I thought it would be such a hoot. If they'll go for it. I don't know if they will."

Parton was the first Country singer to appear on the cover of Playboy magazine when she posed with the iconic Playboy bunny outfit, ears and bow tie back in 1978. She was 32 then.

Well, it seems Playboy has heard what Parton had to say and is willing to give it a go.

She told BBC Radio in an interview over the weekend that she has had talks with the magazine.

"Well, there's some truth in that. I just might do it. If I can do it in good taste and they want it, we'll do it along with a really good interview inside. So, yeah, it's possible. Yep, we've talked about it," said Parton who turns 75 on Jan 19,2021

Earlier this year, Parton gave the new generation a glimpse of her Playboy photo when she sparked a viral social media challenge named "Dolly Parton Challenge" where users post four profile photos that would be appropriate for LinkedIn, Facebook, Instagram and Tinder. Parton posted her Playboy photo as the one for Tinder.

Get you a woman who can do it all

At 58, Michelle Yeoh still does her own stunts