Though he is a famous actor in real life, South Korean star Ji Chang-wook says he wants to try working at a convenience store – just like Dae-hyun, his character in romantic-comedy Backstreet Rookie.

"I did some training at the head office of a convenience store before shooting. I actually want to go to the convenience store and experience working part-time for a few days as well, but my situation doesn't allow me to do that. I will definitely try if I have the chance in the future," says the 33-year-old.

He reveals in an e-mail interview that as a young man, he too, used to buy expiring but still edible food from convenience stores back when he had a friend who was a convenience store employee.

Ji says: "Convenience stores provide a space for chance meetings and, in a way, closes the gap between people. There are so many warm stories that take place in a convenience store."

In the series, Ji is the romantic partner to child star-turned-leading lady Kim Yoo-jung, who plays Jung Saet-byul, an employee Ji's character hires to take over the store's night shift.

The 20-year-old Kim, who debuted in 2003 and is best known for her roles in Moon Embracing The Sun (2012) and Love In The Moonlight (2016), says of her latest role: "On the surface, she looks capable, energetic and hot-tempered, but inside, she is really kind. Although she has experienced many difficulties in life, she still has a lot of faith in herself and faces everything bravely."

For Ji, whose good looks often land him dapper, dashing romantic roles, the hapless Dae-hyun is a bit of a departure.

Calling his character "really awkward" and "ridiculous but lovely", he says: "He doesn't have very suave and talented characteristics like a typical male lead in an idol drama, but he gives off a friendly and comfortable aura, sort of like your neighbour, and becomes charming eventually in his own way."

He adds: "He is indecisive but very faithful, like a puppy."

Kim has her challenges too - her character is skilled in street-fighting and the drama's exaggerated and comedic fight scenes often portray her as supernaturally strong.

She says: "I didn't have a very long time to prepare before shooting the action scenes, but I spent a lot of time practising. I am pretty good at sports, so it was not that tiring. In fact, I found it very fun."

While both Ji and Kim shied away from answering questions related to the drama's controversy – it received a warning from the South Korean authorities for airing provocative scenes, including one in which a high-school age Saet-byul kisses Dae-hyun – Ji says the cast had a happy time on set.

"Because the script was very funny, we always laughed out loud together when shooting. It was very relaxing and pleasant on set." – The Straits Times/Asia News Network

Backstreet Rookie airs every Saturday and Sunday at 9.45pm on One HD (Astro Ch 393). 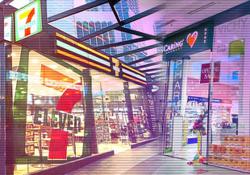