On July 5, local production house Kuman Pictures tweeted that its film - the postponed horror flick directed by Emir Ezwan - Roh will be screened on Aug 6 in cinemas.

Emir uses myths and beliefs to weave a story surrounding the supernatural in Roh. The tale starts when a family is visited by a strange little girl who tells them an even stranger message.

While Roh is the only Malaysian horror film in August, it is not the only horror film to catch in cinemas in the coming months.

Besides the Korean zombie flick Train To Busan Presents Peninsula opening on July 16, there is the American show The Sonata - in which a demon could be summoned with the right music - scheduled to premiere on July 23.

International films that fall into the supernatural genre arrive steadily from that point onward too. Here are three of them.

Based on the video game series of the same name, the film is set in a world where dangerous and powerful monsters exist. It is here that Lt Artemis (Milla Jovovich) and her unit are transported to during a mission. Thai action star Tony Jaa co-stars.

The sequel to A Quiet Place, with Emily Blunt, Millicent Simmonds and Noah Jupe reprising their roles. They are joined by Cillian Murphy and Djimon Hounsou.

Produced by Jordan Peele and directed by Nia DaCosta, this new Candyman film returns to the neighbourhood where the legend began. The 1992 film was based on author Clive Barker's The Forbidden.

New normal: The do's and don'ts of going to cinemas from July 1 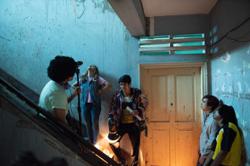