As an independent young woman, Hong Kong actress Michelle Wai enjoys going on solo vacations, more so when she needs to take her mind off something depressing like a bad break-up.

In her latest movie Lost And Found In Tokyo, Wai portrays a young woman who decides to take a solo vacation to Japan to get over a depressing heartbreak.

The light-hearted romantic comedy was released in mid-June in Hong Kong after being postponed from April due to the pandemic.

The Hong Kong actress told reporters in Hong Kong while promoting the movie that she often went on vacation alone and has even embarked on solo travels to Taiwan and Korea to get over some of her own break-ups.

“The character in the movie is quite like me in that I would also take a solo vacation after a breakup. It is quite effective; so I recommend, for those unlucky enough to suffer a breakup, to try a solo vacation. But, of course, it is advisable to pick somewhere safe to go.”

“I’ve gone on vacation by myself several times. But I just went somewhere near, Taiwan and Korea. I usually go for a week, because I have to get back to work. I feel that a month would be better, if I had the luxury of time.”

Wai reasoned that when a girl goes on a solo vacation, she has many things to worry about and to take care of, that it would take her mind off her heartbreak.

The 35-year-old actress who appears in 80% of the scenes, says the biggest challenge in the movie was the never-ending costume changes

“The character has up to 40 costume changes. I do at least three to four costume changes a day. But the effect is really nice, so I felt that it's well worth the effort.”

The bubbly lass said she enjoyed shooting the film in Japan as it felt like she was on vacation. “I was eating all the time while at work. The crew was concerned that I would catch a cold so they kept giving me hot chocolate, ” said Wai, lamenting that she put on so much weight that it interfered with the continuity of scenes when she returned to Hong Kong for another movie shoot. 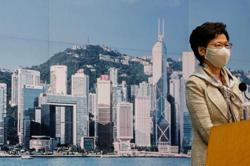