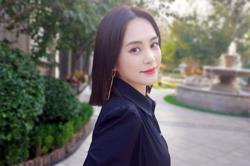 Gillian Chung and Michael Lai got married in 2018. Last Friday, he announced on Instagram that he is single again. Photo: Instagram/Gillian Chung

Hong Kong star Gillian Chung's husband Michael Lai said he would take legal action against false allegations, in his first comments to the media since news of their separation broke last Friday.

The Taiwanese aesthetics doctor, who appeared at his clinic yesterday without his wedding ring, told journalists that he decided to speak to them to protect his patients' privacy and urged them not to gather outside his clinic.

"This is a regretful incident and I am very sad about it. I hope everyone can give me a little space," he said. "I respect her and will not react further to the incident."

He said he has instructed his lawyers to take legal action against the unfounded allegations circulating on the Internet.

"I am immune to unkind words in the last two to three years, but I will sue all the way if these false rumours are libellous," he said.

The doctor, who turns 31 later this month, married Chung, 39, less than two years ago. Rumours that their marriage is on the rocks had dogged them in the past year.

Last Friday, he uploaded a lengthy post on Instagram admitting to being single again, after reports of their separation had surfaced earlier in the media. He wrote that Chung, one half of Cantopop girl group Twins, regretted marrying him.

Meanwhile, Chung has not reacted publicly to the disclosure, confirming the separation only through her agency Emperor Entertainment Group. Her only post on social media since last Friday was one wishing all mothers a happy Mother's Day on Sunday.

The couple's romance was first reported in October 2017. They became engaged in February 2018 after a six-month courtship, held a wedding ceremony in May 2018 and were officially married in December 2018. – The Straits Times/Asia News Network