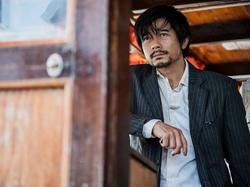 The 54-year-old singer and actor, known as one of Hong Kong's Four Heavenly Kings, is well known for his dance moves. He was flanked by about 100 dancers wearing masks for the concert held on the rooftop of shopping complex Harbour City in Hong Kong.

Kwok kicked off the hour-long concert with one of his most beloved hits, Loving You Forever (1990).

He sang other hits including Crazy City (1994) and paid tribute to his mother, who died in February this year, saying she had influenced him to do charity work.

His concert reportedly raised more than HK$1 million (S$182,200) for those affected by the coronavirus pandemic.

Kwok, who got his start in entertainment as a dancer, also urged the public to donate to dancers and other performing arts professionals whose incomes have been affected by the pandemic.

The event marked one of the rare times Kwok has allowed his elder daughter Chantelle to be photographed in public, though the three-year-old had a mask on.

His wife, Chinese model Moka Fang, showed up at the event with Chantelle. The couple have another daughter, one-year-old Charlotte, who did not appear at the event.

In an Instagram post after the show, Kwok wrote: "I was blessed to have these 100 comrades beside me, in an open space with no glamorous costumes, no stage lifts, no lights or fireworks, no make-up rooms, no air-conditioning, just sweating it out and dancing happily." – The Straits Times/Asia News Network