It's all about showing who's in charge.

Although some of us pooh-pooh at K-dramas for its unrealistic premises, a couple of legal dramas and cop shows from South Korea are actually top notch. They feature interesting subplots, touching on corruption and greed, have terrific main characters and boast a strong storyline at the centre of them.

One reason why legal and cop shows are grounded is probably because the cases are based on newspaper headlines, with some creative license added of course. And since it is usually a limited series with 16 to 20 episodes, the story is focused on the cases without much need for melodrama to stretch the narrative unnecessarily.

Stranger, Defendant, Live, Tunnel and Signal are some fine examples. Now there is another one, Hyena.

This 16-episode series revolves around a shrewd lawyer, Jung Geum-ja (Kim Hye-soo, Signal), who runs her own tiny law firm (with her as its one and only lawyer), and an ace lawyer Yoon Hee-jae (Ju Ji-hoon, Kingdom) attached to the high-profiled Song & Kim Law Firm.

The paths of these two lawyers cross, of course, as they move in the same circle – representing the filthy rich. But the result of their meetings, especially the first one, is far from conventional. It would be a disservice to the show to reveal what that is as that’s half the fun of watching this show.

Kudos to the writer of Hyena for conjuring a strong female character with Geum-ja. She is quick-witted and a bit of a con artist – traits that come in handy when she needs to win a case or win over an ally. The street-savvy lady also knows how to manoeuvre within and outside the law to her advantage.

With every word, action and style – she wears tracksuits off work, and pantsuits at work – Geum-ja exudes confidence. Going for meetings is so 2019.At first, her clients are gangsters and thugs but now she’s on her way to fulfil her goal – to get the truly wealthy as clients, and earn lots of money in the process.

Since she represents this group of people who think their actions are above the law, Geum-ja has to resort to all sorts of antics to keep them happy.

For example, she convinces a former employee who was physically abused by her rich client to drop the case saying the poor woman will never stand a chance in court, and will end up losing whatever little she has including the future of her son.

Obviously, a typical heroine lawyer will try to fight for the weak. While Geum-ja does head in the opposite direction, we can’t help but realise that she’s working within the parameters of reality. 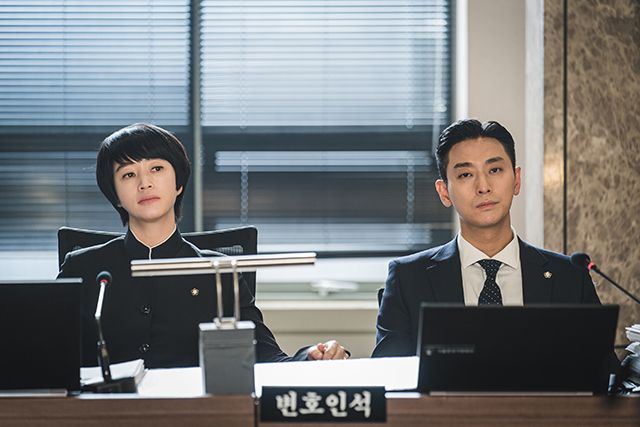 Don't judge the show by the expressions of these two.

The rich and the powerful almost always get out of sticky situations because they have a way around it. Why not make turn this unfortunate situation into a positive one?

In this case, Geum-ja offers money to settle the case, so the woman could send her son to a good school, at least.

Her sense of justice may be warped, but it works. Geum-ja may come off unlikeable on paper but thanks to actress Kim’s performance, the character is far from that.

It is nice to see a woman portrayed as more than just a romantic interest in a K-drama. At no point do we see Geum-ja pull out the damsel in distress card; if anything, she would rescue the man.

Interestingly, too, the actress who plays Geum-ja turns 50 this year – and she plays a 41-year-old here – opposite an actor who is 37.

Likewise, Ju’s character is painted as ruthless and arrogant lawyer at the start of the show. Coming from a family made up of respected judges and prosecutors, Hee-jae is by the book kind of guy and a yes man to his big boss. You know what they say about hyenas - they congregate at kills.

Aside from these two rival lawyers, Hyena has a number of likeable supporting characters, each one with their own talents.

It also offers a number of interesting cases including one about a religious leader abusing her own daughter, and a tech company that releases its clients’ personal data for money.

Another case involves the son of a conglomerate boss which leads to the reveal of the series big bad.

The central theme of the show is greed, we see it in Geum-ja and the antagonist. But, their respective greed yield different results.

While Hyena has a lot of tense moments – with many twists and turns – there are some comic relief too. Actor Ju especially gets to exercise his comedic muscle to great effect.

Evenly paced throughout the 16 episodes, Hyena has little to no dull moments. The soundtrack is nice too, like the theme song by Giriboy and a fast track by Yeo Eun that accompanies all the explosive scenes.

Maybe it’s not a bad thing to be a ruthless money-sucking lawyer who’d do anything to get the outcome she wants.

Hyena is available on Netflix.

A not-to-be-missed legal drama with a not-to-be-messed female protagonist.

This 'Crash Landing On You' star has Malaysian blood