Whether it's the joys or the sorrows of a relationship, callers pour their hearts out to Suria's DJ Lin on her popular radio show Suria Cinta. Photo: The Star/Yap Chee Hong

Suria radio deejay Roslinda Abdul Majid has just helped turn two strangers into soulmates through her love show Suria Cinta and to express their gratitude, the happy couple invites her to witness their union.

And then something unexpected happens.

“She’s the mother of one of the newlyweds, ” DJ Lin recalls in an interview with StarLifestyle. “She tells me she has recently remarried. And then she reveals she met her husband through Suria Cinta too!”

“In fact, it was the mother who first found success for herself through the show. She then decided to sign her child up for it.”

For six nights a week (weeknights and Sundays), DJ Lin spends five hours (8pm to 1am) lending a listening ear or dishing out advice on all things love and relationship on Suria Cinta.

There’s also a special slot devoted to helping people find love. Listeners need only jot down a description of themselves, what they’re looking for in a partner and their social media handles. DJ Lin will then read them out on her show. Those interested will reach out accordingly.

“So on that day, I learned I brought together not one but two couples!”

DJ Lin is sharing some of her fondest memories from her 20-year radio career. And what an illustrious one it’s been.

The 43-year-old picked up the Most Popular Radio Presenter Award for the second time at this year’s Anugerah Bintang Popular Berita Harian.

She first earned the prestigious award in 2016. Suria Cinta, which she helmed from the start, is consistently the most popular late night show among Malay-language stations.

However, in an eye-opening interview, DJ Lin reveals she never dreamt of becoming a radio announcer.

Dreamt of a different life DJ Lin has helped many find love through a segment on her love show. Photo: MUHAMAD SHAHRIL ROSLI/The Star

“I’ve always wanted to be a police officer, ” she shares.

Born and raised in Johor Baru, DJ Lin is the seventh of 10 siblings. Her eldest sister was the first in the family to be a cop.

“As a kid, I would watch my sister get ready. She ironed her uniform so diligently, there wouldn’t be a single crease and when she put it on, she looked so smart.”

To ensure a smooth passage in her law enforcement career, DJ Lin did both. But while pursuing her degree in communications at Shah Alam, a new path emerged.

“My university was starting a campus-wide radio station and they were looking for announcers. My friends encouraged me to try out. They literally call me ‘radio’ because whatever song they wanted to hear on any given day, I could sing them on the spot.”

DJ Lin says her knowledge and love for music was birthed during her schooldays.

“Whenever I studied, I always had music on. And I would use music to help me memorise important facts. So I would replace the lyrics to my favourite songs with historical facts or whatever it was I needed to memorise, ” says DJ Lin, who was a top student.

DJ Lin landed the part and got a taste of being a radio announcer for the first time.

Still, she never wavered from her original dream. Midway through her degree, she responded to a police recruitment ad.

“You have to wait for them to announce they’re having a recruitment. You can’t just go up to them anytime.

“So when I saw the ad one day, I was so excited, I went to the nearest police station. When I got there, I found out they were only looking for male applicants at the time. They told me to come back again.”

DJ Lin returned to Johor Baru after graduating and worked at a radio station there while waiting for the next recruitment drive.

“I tried my luck and sent the radio station recordings from the radio show I did back in university. They eventually hired me as a secretary, but promised me an announcer position as soon as there was an opening.”

Less than six months into her job, a colleague informed her about an opportunity at Rediffusion (later renamed Red FM) – an English and Malay-language radio station based in Kuala Lumpur.

She tried her luck.“There were so many people at the auditions, I remember thinking I probably won’t get the job.” 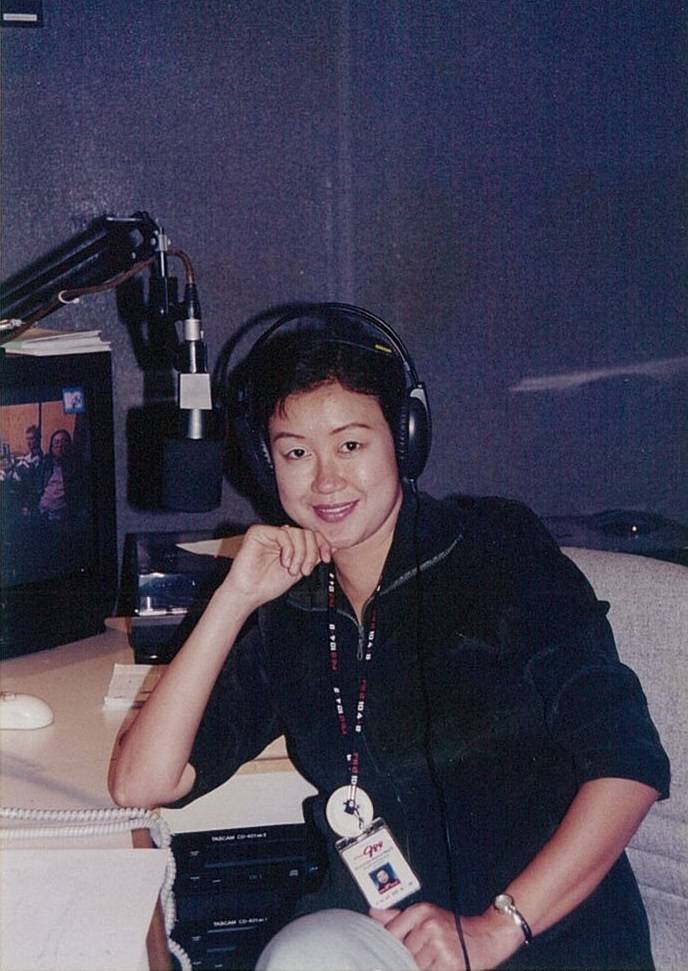 When DJ Lin first auditioned to be a radio announcer at Rediffusion (later renamed Red FM), she didn't think she'd get the part as there were so many hopefuls. Despite the odds, she was hired in 1999.

Despite the odds, DJ Lin got the job and officially made her debut as a radio deejay in December 1999.

“My first task was hosting a two-hour song dedication show. Although I only spoke at the start and at the end of the show, it was a very popular segment and people started getting to know me.”

Yasmin Yusuff, who was the station’s programme manager at the time, observed DJ Lin and felt her soft-spoken voice would be a great fit for a love show. Just like that, Citra Cinta – now known as Suria Cinta – was born.

“It aired once a week initially and the response we got was overwhelming.”

In 2005, in a bid to expand the Malay-language programming belt, a standalone radio station – Suria FM – was established.

DJ Lin’s show went from being aired on a weekly basis to an almost nightly basis.

A shoulder to cry on

Over the years, Suria Cinta has become a safe place for callers to share their relationship woes. DJ Lin, a single mother with two kids, aged 18 and 16, says the trials and tribulations she faced in her own love life means she understands heartbreak all too well.

“I met someone back in secondary school and for seven years, right up to my university years, I was loyal to him.

“One day, at university, a woman came up to me and said he’s actually with her. I was crushed. I had plans to get married after I graduated.”

DJ Lin also talks about rebuilding her life the day she filed for divorce 13 years ago due to incompatibility.

“After the divorce, I had nothing. No savings. No house. No car. My kids were about six and four then. It was a really tough time.”

The announcer, who has since chosen to remain single to focus on her children and her work, reflects: “If I had the perfect love story, I may not be able to relate to my listeners as well.”

DJ Lin recalls the stories of callers that have moved her.

“The show’s theme on that day was ‘loss’. This woman shared that she was waiting for her husband-to-be to arrive at the mosque for their wedding ceremony.

“‘I’m going to get there soon’, he tells her on the phone. She hangs up.

“After some time, she gets a call saying her husband-to-be died in a car accident on the way over.

“She said her heart has been closed off ever since.” Another memorable sharing was by a college student in a violent relationship.

“She was running a little late and the boy was waiting for her for some time outside her house. When she came out, he hit her head with a motorcycle helmet.

“I got very fired up when I heard that. I said you have to cut ties with him immediately. A person who is just getting to know you is already using physical violence against you. It will only get worse when you get married.”

A few days later, she called the show again and told DJ Lin: “I followed your advice. I left him and I feel much better now.”

Rising up the ranks

The senior programme manager says the added duties have been a great learning curve for her.

She is especially thrilled to see Suria rise and become the fourth top Malay-language radio station in the country (up one spot), according to GfK’s recent Radio Audience Measurement (RAM) survey.

“We’re targeting to be among the top three now, ” she says, determined.

Asked if she’ll ever retire from helming Suria Cinta and focus on more behind-the-scenes work, she responds: “I will continue to do what I do as long as my listeners still want me.”

So whatever became of her police dreams?

“Whenever I go to events, I’d meet some fans who happen to be in the police force. They’d advice me against switching careers. I’ve experienced so much success in radio. I’ll have to start from zero as a cop.

“But yes, I still think about becoming a police officer sometimes.”

Tune in to Suria Cinta weeknights and Sundays from 8pm to 1am. Suria is owned by Star Media Radio Group.