Those were among the comments Nurul Hafiza Mohd Sakri was greeted with on her first day on the job as a stuntwoman.

“I kept quiet. I didn’t want to say that ‘Yes, I can do this or that.’ I wanted to prove myself through my work, not my words, ” she recounts her early beginnings as a stuntwoman to StarLifestyle.

Known professionally as Fiza Fukazawa, the 32-year-old has spent the past five years piercing through this veil of scepticism, perhaps stemmed by the fact that a woman doing stunt work was virtually unheard of in the local entertainment industry for a long time.

She has since gone on to perform stunts for various local blockbusters including Polis Evo 2 and Tombiruo: Penunggu Rimba.

“I never thought of being a stuntwoman, ” says Fiza, who stands at 1.58m tall.

She started out as a dancer. “I didn’t get the opportunity to further my studies. After SPM, I had to immediately start working to support my family.”

After secondary school, she trained as part of a Chinese dance troupe for four months before making it on her own as a freelance dancer.

She spent the next decade or so establishing a company that supplies a variety of performances – from dancing to fire performances – to corporate events and parties. “I really enjoyed my work. I was very happy for those 10 years.”

But an accident changed everything.

In 2012, while attempting a fire breathing performance (where performers spew out a blast of flame), something went wrong and Fiza suffered burns on her face.

Her adopted daughter was over a year old at the time and with multiple responsibilities weighing on her shoulders, Fiza broke down.

“It was my second day at the ICU and I started crying. I thought about my future. I didn’t know what my face will look like after this. I may have to do something behind the scenes, ” she says. Many looked down on her abilities initially but the dancer-turned-stuntwoman is proving her critics wrong.

Beside her dance background, Fiza had earned a black belt in karate at 14, even representing her school at the Sukma Games.

“I thought to myself what could I do that was within my skill set. That was how I turned to stunts, ” she explains.

Fiza began to seek out ways she could break into the stunt industry.

“After about a year, my face healed completely and I started going for castings. They were looking for actors but I went anyway to make connections.”

Gradually, she made inroads into the stunt community and landed her first stunt job.

“I started with really simple stunts like falling off stairs and hand-to-hand combat. Of course, when you’ve just started, you’re not going to be paid well, so I continued dancing on the side, ” she says.

Fiza describes her job scope: “I take orders from the stunt director. He already has a choreography in mind and he will tell me what he wants me to do.

“From his instructions, I have to imagine what it will look like in the scene and apply it. If I can’t imagine it, I ask them to demonstrate for me first.”

She says it usually takes two to three takes to nail the scene.

“Once, there was a scene where I had to be thrown on the ground at the end of a fight choreography. The stunt director wanted it to be perfect so I ended up doing 12 takes!”

Some doubted her ability to make it in the male-dominated field but Fiza says it only fuelled her resolve to excel. “So I decided to sharpen my skills and add to them.”

Fiza used her own savings to enrol in stunt academies in Australia and the United States.

“I also worked on getting a skydiving license in Australia and scuba diving license locally. They cost a lot but in this industry, you need to have all these licenses. You never know when you’ll get an action movie that requires them.”

Today, she is able to do stunts involving cars, wires, weapons, hand-to-hand combat besides skydive and scuba dive. 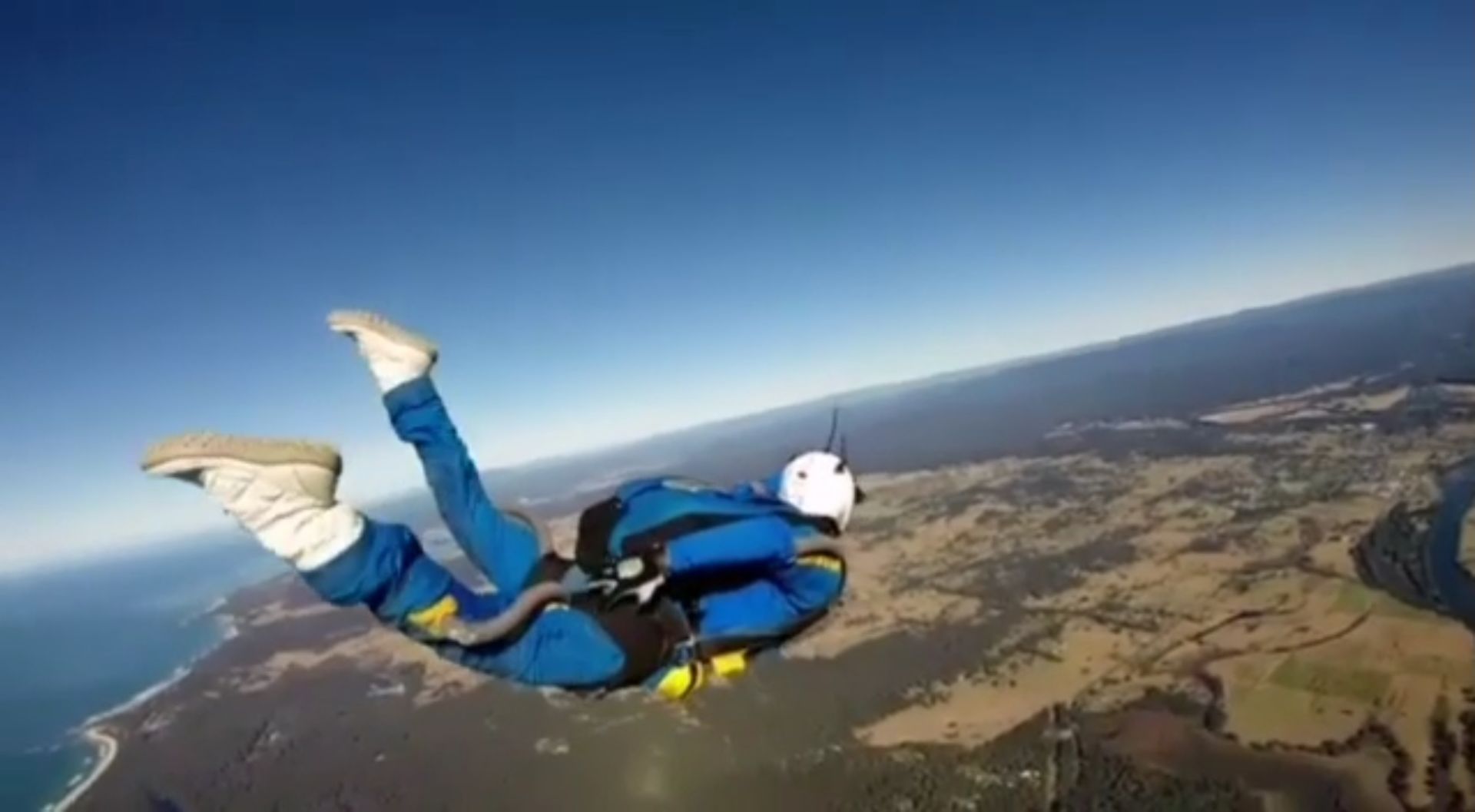 Fiza financed her own skydiving course to make sure she has all the skills she needs to be a stuntwoman. Photo: Handout

Locally, Fiza was a stunt double for Nabila Huda, who played a journalist in 2017’s Tombiruo: Penunggu Rimba, and Raline Shah, who played a highly-capable cop in 2018’s Polis Evo 2.

“If the character in the movie is a woman, it makes sense to have a woman as her stunt double.”

More importantly, Fiza believes the increase in these empowering female figures broadens the representation of women in films.

“It shows that women aren’t just seen as housewives. They can be cops, they can be anything they want to be.”

Since beginning her career as a stuntwoman, Fiza has seen three other women joining the industry as well.

“When they ask me for advice, I will share what knowledge I have. And if there are stunt jobs that I’m not able to take on, I will recommend them to my contacts.”

Asked what advice she would give other aspiring stuntwomen, Fiza offers: “If anyone doubts you, you just ignore them. Only you know your strengths. You just show them what you can do and once you’ve proven yourself, they’ll go, ‘Wow!’”

“So now when I get on a movie set, people say, ‘Oh yes, you’re that stuntwoman.’ And that makes me happy.”