'Serumpun: Crafts Across Borders' will take place in Kuching, Sarawak, till the end of the month. The collective exhibition features stories that have been pieced together from 11 communities across borders, to show the public how crafts are used as an instrument to maintain identity, drive activism and gain unity. Photo: Handout

Before colonial governments like the Dutch or British came to our countries, we used to be serumpun, according to one Ketua Kampung from Jagoi Babang, Bengkayang in West Kalimantan.

The choice to use the word “serumpun” to define an upcoming Sarawak exhibition, Serumpun: Crafts Across Borders, can be traced to the statement above. Even today, despite their respective multi-cultural features, Malaysia and Indonesia are sometimes considered “serumpun” or of the same root, and so it seemed an apt name for the exhibition highlighting 11 creative practices which share common connections throughout Borneo.

“While ‘serumpun’ literally means a bundle of grass that shares the same root, it also implies how the craft knowledge, ecosystem and material cultures are all connected across Kalimantan, Sarawak and Sabah,” explained Wendy Teo, 38, architect and founder of the multidisciplinary practice Borneo Laboratory, based in Kuching.

The Serumpun exhibition is a result of the research collab titled “Cultural Assets And Vernacular Materials (C&VM)” between Borneo Lab and the Glasgow School of Art under the support of the British Council, and encompasses a cross-regional, multidisciplinary event showcasing crafts, research presentations along the lines of film documentation, an exhibition as well as workshops.

Though on paper the C&VM project is a year-long effort, discussions and work began even before the pandemic when Professor Dr Lynn-Sayers McHattie, Professor of Design Innovation at The Glasgow School of Art, and Teo began sharing notes, observations and interests about crafts and communities in South-East Asia and the Malay archipelago.

“For us, the project was more of a social experiment, and not just a craft project. We carefully pondered how we could be a companion to these practitioners on this impact-making journey,” shared Teo.

The C&VM research project engaged craft practitioners to use the funding channelled to them, to develop projects that would contribute to the sustainability challenges faced by their communities. These outcomes, be it a book, workshop, competition or product series, were produced, carried out on the practitioners own journeys of conversing with their respective communities. The Sepatokimin Iniative highlights the work of weavers from Singkawang who craft intricate and symbolic motifs on kain songket. Photo: Handout

“The exhibition is the culmination of the research work we have done until now. But this project is still evolving so it only captures a cross section of work done at this point in time. The project will go on until February 2023, at which time there will probably be another event,” Teo said, suggesting that their findings may even take the form of a VR exhibition then.

Getting down to the roots

Serumpun: Crafts Across Borders will take place in Kuching, Sarawak, till the end of the month. The collective exhibition features stories that have been pieced together from 11 communities across borders, to show the public how crafts are used as an instrument to maintain identity, drive activism and gain unity. 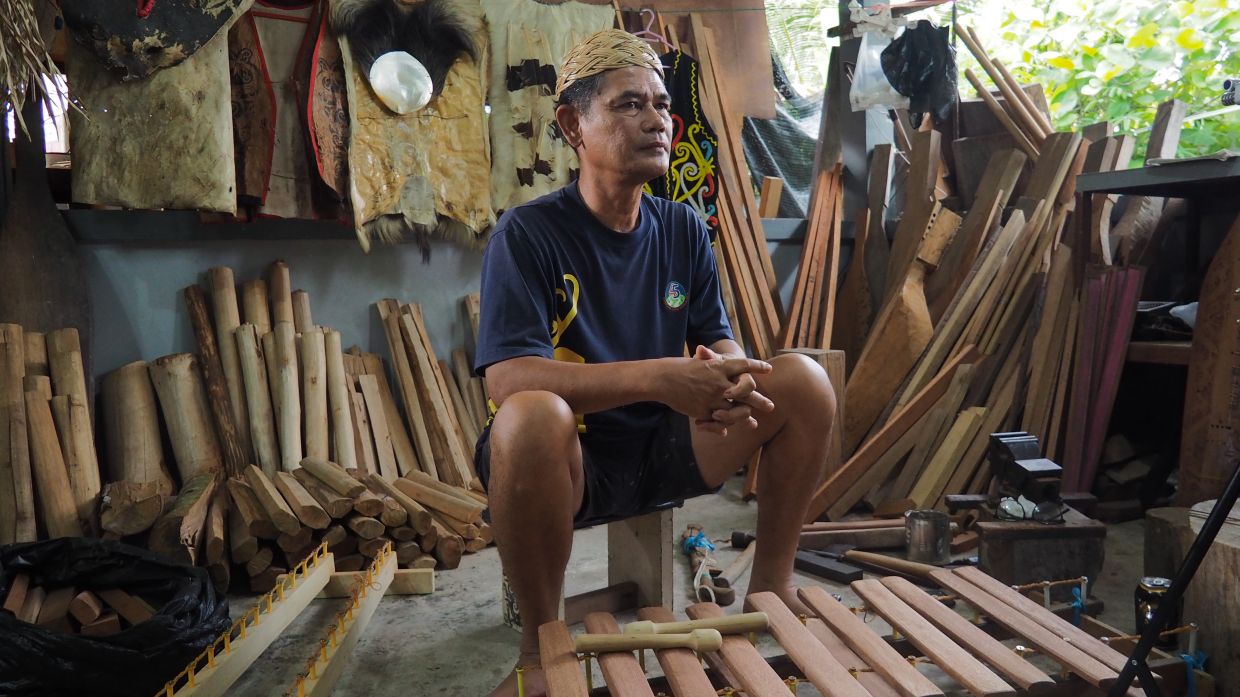 Salomon Gau is a musician and craft artisan, originally from Long Ikang, Baram, and now based in Miri. Deeply passionate about preserving his cultural heritage, Salomon has dedicated close to 20 years to researching, understanding and honing his craft. Photo: Handout

“We’ve been busy running around with all the last minute preparations,” admitted Teo during a recent interview, explaining how the exhibition will showcase various aspects of sustainability of Borneo crafts; not just from a financial metric.

“We’ve researched connections to culture, such as language, and the practise of weaving dreams into fabric, like pua kumbu.

“If people are no longer speaking a language then how can they maintain their identity and speak it through their craft? If languages start disappearing, does this jeopardise a community’s craft?” she added.

Teo pointed out that the team also looked at how gender affects sustainability too. In Miri, for example, a lot of the menfolk started pursuing work in the Oil & Gas industry at one point. The females were left behind in the kampung to carry out the craft work on their own. What was the effect of that on craft and community? When people leave their kampung and commit to a new industry, how does that change their ecosystem?”.

Because they were delving into these topics it was imperative to work with the grassroots groups.

“We did a one-month Pan Borneo research road trip to visit the communities that the team was working with. It was important for us to meet and engage with the people who are already involved and productive around Borneo because they have been exposed to the cultural, political and social context in this region," said Teo. 'We’ve researched connections to culture, such as language, and the practise of weaving dreams into fabric, like pua kumbu. If people are no longer speaking a language then how can they maintain their identity and speak it through their craft? If languages start disappearing, does this jeopardise a community’s craft?' asks Teo, founder of Borneo Laboratory and in-house curator of Think & Tink. Photo: Wendy Teo

The exhibition is divided into five themes, including the changing landscape, which takes into account scarcity of materials. A lack of biodiversity and accessibility to natural materials like rattan and timber has, for example, provoked craftsmen like Saloman Gau to look at alternative sources of timber for his creation of Jatung Utang, and Manai Jagoi to explore alternative fibres as a replacement material for rattan basketry.

Other themes the exhibition will explore are the market, documentation, innovation and youth education.

“Education in a collective effort. In Kalimantan, we saw how Sanggar Sarantangan worked with local schools to use local jelai beads as part of their curriculum. And in Sabah Keningau, we saw Rasmah Rumambai enable a workshop attended by members of Murut Bookan village, which was celebrated on a festival scale,” shared Teo.

“It was the first time more than 80 people had participated in such a workshop. And that was great, it was the sort of thing we were hoping for – how someone can make an impact on his or her own individual scale.”

What’s more amazing, Teo shared, was that on the second day of Rasmah’s workshop, she received an offer from a local minister, to give her a piece of land to open up a gallery and a long-term bengkel.

Teo was happy to report that the team had witnessed a number of heartfelt moments like this created by the 11 practitioners and their communities.

“Working closely with craftsmen, and understanding their wants and restrictions, has truly enabled us to bridge them with potential collaboration opportunities, and this has resulted in a number of in-depth exchanges and life-long friendships. Looking forward, I see this as sort of pilot to many meaningful journeys to come,” she concluded.

Serumpun: Crafts Across Borders takes place at the Borneo Cultures Museum in Kuching, Sarawak from Dec 3-7 and then moves to community art space Think and Tink (in Kuching) from Dec 10-31. More info here.