A farmer rides her bicycle to harvest her paddy field on the outskirts of Kuching in Sarawak. The upcoming 'Jalur Kita, Cerita Kita' concert at KLPac will feature new classical works that revolve around Malaysia’s rich cultural history. Photo: The Star/Zulazhar Sheblee

It is also the non-profit collective’s first concert this year.

Adeline Wong, President of MCC, says that the collective’s mission is fourfold: “To create more opportunities and exposure for local composers, to increase awareness and promote Malaysian music at home and abroad; to support the creation of Malaysia’s new music repertoire and commission of local compositions; and finally, to provide a catalyst for composition and new music education.”

MCC has been promoting Malaysian composers at home and abroad over the past 12 years.

As the member organisation in the Asian Composers League (ACL) since 2009, MCC sends young composers to represent Malaysia at the Young Composers Competitions at the ACL festivals around the region every 18 months.

“I had the idea to commission composers to research the various states of our country, and then integrate their research as part of the composition process,” says Wong, who is artistic director of the concert.

The project had initially been slated for Malaysia Day in September, however due to unforeseen issues, it was delayed.

“Nonetheless, we are pleased that our new date for the concert is confirmed and will be presented in collaboration with the 13th UiTM-klpac Composers Concert Series,” she adds in an email interview from Singapore where she is based. ‘I had the idea to commission composers to research the various states of our country, and then integrate their research as part of the composition process,’ says Wong, who is artistic director of the concert. Photo: Handout

Born and bred in Kuala Lumpur, Wong received her undergraduate degree from the Eastman School of Music, University of Rochester, in New York, before getting a scholarship for postgraduate studies at the Royal College of Music, London.

“When my husband was transferred to Singapore for his job, I applied for a position at the Yong Siew Toh Conservatory of Music more than 10 years ago,” she shares of how she landed in Singapore.

“I have been a member of MCC since its inception in 2008. In 2018, I was nominated by the committee to become the President and I accepted the position.”

Wong says that the collective, which has 21 members, hopes to provide opportunities for composers within this region with different cultural backgrounds to present their works, exchange ideas and increase the repertoire of local compositions for performance by musicians local and abroad.

“Jalur Kita, Cerita Kita which literally translates to ‘Our colours, our stories’ explores how several generations of composers tell their stories through music celebrating our nation, a land of diverse people with a rich heritage. With 14 states all represented, 14 composers tell unique stories through their music. The musical styles captured are as diverse as Malaysia’s people themselves: colourful, contrasting, exciting and refreshing,” says Wong. The concert will be performed by two groups of musicians: a local string ensemble called Ensemble Virama; and the chamber ensemble from Yong Siew Toh Conservatory of Music.

“One of the missions of MCC is to foster a healthy exchange not only between composers but with performers from this region. And this is exactly the kind of platform that will enable this sort of exchange amongst musicians from this region.”

Wong explains that there were two phases in the selection process. In phase one, composers chose their state and wrote a short proposal on their research ideas and how it would be integrated in the creative and composition process.

“For this, I worked closely with my fellow composer from MCC, Dr Johan Othman who is a research specialist from Universiti Sains Malaysia in Penang,” shares Wong.

“Composers also submitted two samples of their compositions together with the research proposal.”

In phase two, shortlisted composers were notified, and they could then proceed to compose the new piece.

There will be lots to look forward to in the concert programme, from dondang sayang to indigenous music.

The concert will begin with Perlis and Adam Masumi’s Awang Batil Bertabik, which reimagines the traditional form of storytelling (Awang Batil) in a string quartet setting. Other interesting compositions include Koay Loong Chuen’s Mujin, based on Penang’s traditional Teochew Puppet Opera and the concept of “peopleless”, a term that reflects how the opera is performed by just puppets and the tiny stage props; Ainolnaim Azizol’s Bayu Nokturnal (Nocturnal Breeze), drawn from field recordings of a cave in Penang, which captures the natural acoustics of the cave and its sounds of wind, insects and the rain present at the time; and Tazul Tajuddin’s Topografi IV – inspired by Selangor’s Blue Mosque in Shah Alam, Tazul uses the unique structure of the mosque’s four minarets and central dome as the framework for his music.

Then there’s Jessica Cho’s The Conversation Of Birds which gathers an assortment of bird calls native to the national park, such as the Helmeted Hornbill and Oriental Magpie Robin, paying homage to Pahang’s Taman Negara. And crossing the South China Sea, Mohd Fairuz Zamani’s Kenyalang Rhapsody uses Sarawak’s indigenous art forms of Ibanese Bejawang/ Bedenjang, Tabuh Iban and the Kenyah’s Pabat Pibui as starting points to paint his canvas, bringing the listeners on a short aural journey to this beautiful state.

Wong, who herself composed Sembilan based on the buffalo horn design found on the rooftops of Negri Sembilan’s traditional Minangkabau homes, says that one does not need to have any special background in music to appreciate the music and performances at Jalur Kita.

“Each work is quite short, just three or four minutes long. While these 14 newly composed works are based on Malaysia’s rich culture and history, what is truly unique in this concert is how the composers tell their own stories. While some are directly linked to the chosen subject, some works are less direct with subtle hints and references,” says Wong, and it will be cool to get acquainted with these stories in a concert setting. 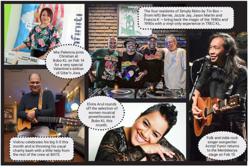